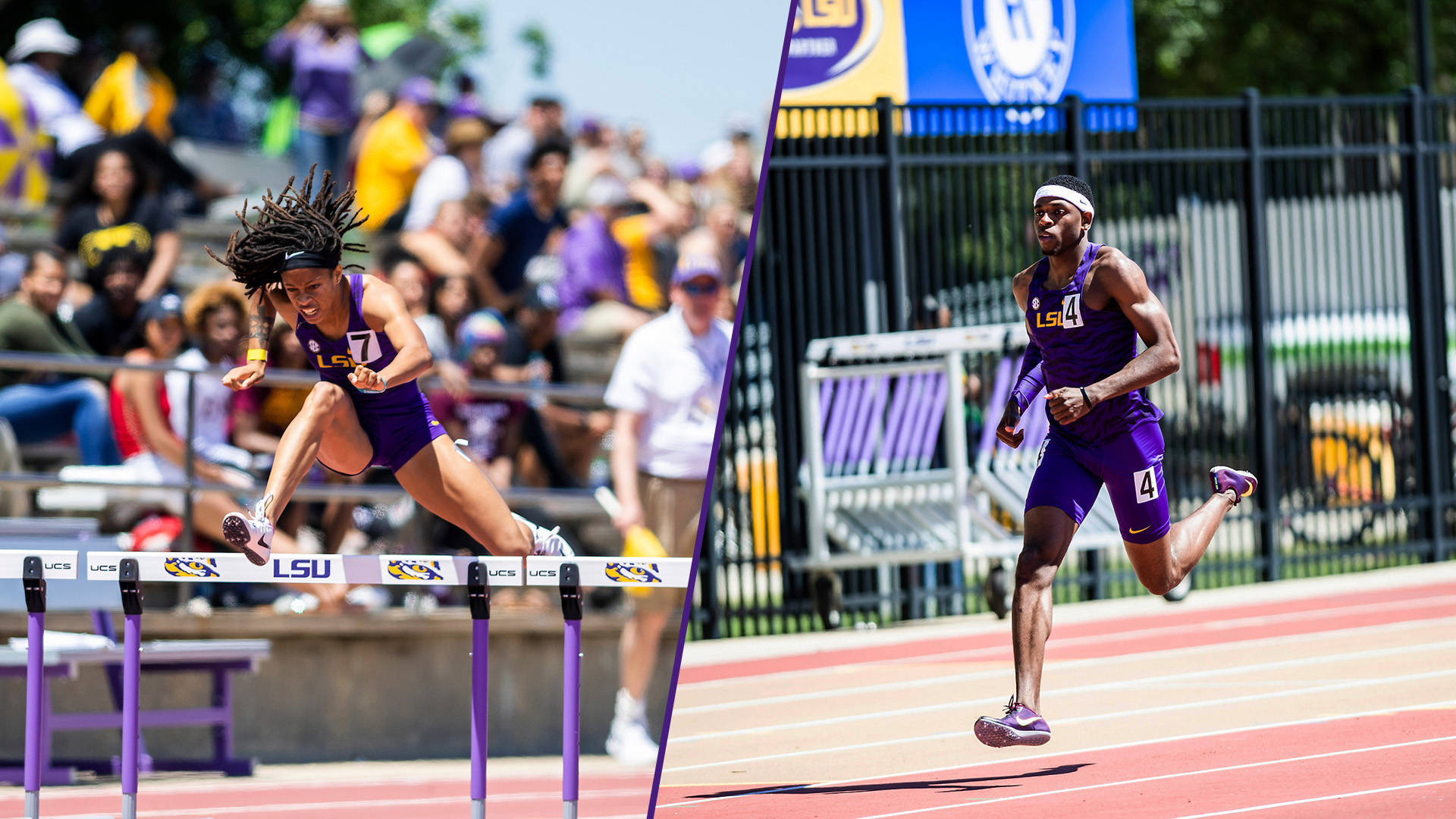 Baton Rouge, La. – The 2019 edition of the SEC Outdoor Championships will take place Thursday through Saturday, May 9-11, at John McDonnell Field in Fayetteville, Ark. The three-day meet will feature some of the best athletes in the nation in what is considered the best track and field conference in America.

Forty-eight athletes (23 women and 25 men) are on the travel roster for LSU to the first postseason meet of the year. The first two days of the meet will be streamed on SEC Network+ Thursday from 6:30-9 p.m. CT and Friday from 6-9 p.m. CT. Saturday’s final day of competition will air live on the SEC Network from 5-9 p.m. CT.

The SEC Championships will see the action get started for LSU on Thursday at 12 p.m. with Jake Norris competing in the hammer throw. A year ago at the SEC meet, Norris was the top freshman finisher with a fourth-place showing in the hammer at the first SEC outdoor meet of his career. A full competition guide is linked above.

LSU returns 45.5 of 72.5 individual points on the women’s side from the 2018 SEC Championships, and the men return all 30 points accumulated in individual events from the 2018 SEC outdoor meet. The women took second a year ago with 88.5 points and the men finished eighth. The nine women returning from the 2018 SEC Championships as point scorers are Kortnei Johnson, Cassondra Hall, Rachel Misher, Ersula Farrow, Brittley Humphrey, Jurnee Woodward, Abby O’Donoghue, Kaitlyn Walker and Milan Young. The men’s squad has seven athletes that return as point scorers on the conference level from 2018 with Jaron Flournoy, Damion Thomas, JuVaughn Harrison, Rayvon Grey, Da’Quan Bellard, Christian Miller, and Jake Norris.

LSU begins the postseason ranked No. 2 on the men’s side and No. 7 in the women’s rankings. The men have been ranked No. 2 for the last four weeks. LSU will face a plethora of ranked squads at the SEC Championships with seven women’s teams ranked in the top 25: No. 1 Arkansas, No. 2 Texas A&M, No. 4 Kentucky, No. 8 Alabama, No. 10 Florida, No. 19 Georgia, and No. 25 South Carolina. The men’s squad will enter the SEC meet as the highest ranked squad in the league and will be joined by No. 4 Florida, No. 5 Texas A&M, No. 10 Alabama, No. 13 Mississippi State, No. 15 Georgia, No. 17 South Carolina, and No. 20 Arkansas. Florida is the defending champion in both the women’s and men’s competition.

The LSU women own the most SEC outdoor titles in conference history with 13 ahead of Arkansas’ seven and Florida’s six. The Lady Tigers won three straight SEC titles from 2010 to 2012 and won five out of six from 2007 to 2012 under head coach Dennis Shaver. The first SEC title outdoors for the women came back in 1985 under the direction of Billy Maxwell. The men’s squad owns the second-most SEC team titles with 22. The Tennessee men have the most in conference history with 25. The first men’s SEC outdoor conference title came all the way back in 1933, with legendary head coach Bernie Moore leading the way. In a 15-year stretch from 1933 to 1947, Moore led LSU to 12 conference titles during that time frame.

LSU has five athletes making the trip to Fayetteville that have won SEC outdoor titles. Jaron Flournoy and Kortnei Johnson are each three time SEC outdoor champs as participating members of the 4×100 meter relay. LSU has combined to win the last six 4×100 meter relay titles at the SEC Championships. The most notable of those was the 2018 women’s title in which the foursome of Mikiah Brisco, Johnson, Rachel Misher and Aleia Hobbs set the collegiate record with a winning time of 42.05. In addition to Johnson, Flournoy, and Misher, Kary Vincent Jr. and Correion Mosby return as SEC champs after they ran on the 2018 SEC winning 4×1.

In addition to being the favorites in their events, Flournoy, Richardson and Harrison have the ability to score in multiple individual events. Flournoy is rated as the No. 4 100 meter dasher in the conference with a season best of 10.14 (+2.3), Richardson owns the third-fastest 200 meter dash time on the women’s side with a 22.78, and Harrison ranks second in the conference in the high jump with a career-best outdoor clearance of 2.24 meters.

Duplantis (pole vault), Harrison (high jump), Rayvon Grey (long jump), Kortnei Johnson (60 meters) and Abby O’Donoghue (high jump) all won conference titles in their events at the SEC indoor meet back in February and will look to do the same this week in Fayetteville. Johnson will be competing in the outdoor version of the 60 meters, the 100 meters.

Freshman LSU pole vaulter Mondo Duplantis made his sixth-straight appearance on The Bowerman Watch List on May 2. Duplantis is one of 10 male athletes on the pre-conference championships list, and he is only one of three male athletes to be on all six ‘The Bowerman’ watch lists this year with Grant Holloway (Florida) and Divine Oduduru (Texas Tech).

Duplantis currently owns the NCAA and world lead in the pole vault with a season-best clearance of 19′ 5.75” (5.94 meters) that he set two weekends ago at the LSU Invitational. The mark of 19′ 5.75” that Duplantis registered broke his own Bernie Moore Track Stadium facility record and it was the second best jump in NCAA outdoor history behind Tennessee’s Lawrence Johnson, who cleared 19′ 7.50” (5.98 meters) back in 1996.

Duplantis has competed for LSU seven times so far this year with five of those appearances coming indoors, and the last two having been outdoors. He won a national title indoors and he set the collegiate indoor record with a clearance of 19′ 5” (5.92 meters) at the SEC Championships. He has claimed gold all seven times he has competed collegiately.

Mondo owns a career best of 6.05 meters (19′ 10.25”) in the pole vault outdoors which is the current U20 world record. He set the mark of 19′ 10.25” at the 2018 European Championships as he went on to claim gold while representing Sweden and become only the fifth man in the history of the world to clear 19′ 10.25” outdoors. The all-time world outdoor pole vault performance list can be viewed at iaaf.org.

Richardson is having one sensational season as a freshman sprinter for LSU. The native of Dallas, Texas, has run six individual races this outdoor season for LSU and she has won four of them outright. She owns wins in the 100 meters at the Texas Relays, where she ran a 10.91 with tailwind of 4.3mph, and the LSU Invitational (11.06/+2.4). She took third in the 100 meters at the LSU Alumni Gold with a wind-aided time of 11.12 (+2.8) and she finished behind two professionals, Aleia Hobbs (10.83) and Crystal Emmanuel (11.03). In the 200 meters, she owns wins at the Hurricane Invitational (22.99) and LSU Invitational (22.78). Her two NCAA season best legal marks of 11.06 in the 100 meters and 22.78 in the 200 meters makes her the only freshman in all of the land to have NCAA top-10 times in these events; the time of 11.06 ranks No. 3 in the NCAA and the 22.78 is No. 6. The only other woman right now in the NCAA to have two top-10 marks in the 100 and 200 meters in Kayla White (North Carolina A&T). Richardson has served as the anchor leg on the women’s 4×100 meter relay five times this season and has led LSU to a victory three times. All three races that LSU has won have featured stunning chase downs by Richardson.

Sophomore jumper JuVaughn Harrison will factor into LSU’s championship aspirations on both the SEC and NCAA level is the upcoming weeks. Harrison is currently the NCAA and SEC leader in the long jump and ranks No. 2 in the SEC in the high jump. At the 2019 SEC indoor meet, Harrison racked up 14 points for the Tigers with a win in the high jump (10 points) and a fifth-place showing in the long jump (four points). Harrison’s NCAA leading long jump came this season at the Miami Hurricane Invitational when he leaped out to a mark of 26′ 9.75” (8.17 meters) to rank fourth all-time in the LSU record book. Just one week after that, Harrison set an outdoor personal best of 7′ 4.25” (2.24 meters) in the high jump to rank fourth nationally in the event and third in the LSU record book.

LSU’s best chance for a big point grab on the women’s side will come in the 100 and 400 meter hurdles. The aforementioned Jurnee Woodward and Brittley Humphrey own the top two marks in the SEC in the 400 meter hurdles and Milan Young rates behind them in fifth. If all three finish on where they are ranked that would mean 22 points for LSU in the 400 hurdles. Humphrey and Young will have a decent shot to score in the 100 meter hurdles as well as they own the eighth and ninth fastest times in the SEC. Junior hurdler Tonea Marshall checks in with the No. 2 time in the conference with a wind-legal 12.81 that she ran at the LSU Alumni Gold. She followed that up with a wind-aided 12.74 the following week at the LSU Invitational.

You’d have to go all the way back to 2015 in the SEC record book to find out who last won an SEC title in the 4×100 meter relay besides the LSU men and women. LSU’s men and women have combined to win the last six SEC titles in the 4×100 meter relay. Jaron Flournoy and Kortnei Johnson have been a member of all three of those relay titles and will look to make it a fourth consecutive LSU sweep in 2019. Kary Vincent Jr., Correion Mosby, and Rachel Misher were all members of the 2018 4×100 meter relay titles. The women’s foursome of Mikiah Brisco, Kortnei Johnson, Rachel Misher and Aleia Hobbs set the collegiate record a year ago at this meet with a 42.05.

At the 2019 indoor SEC meet, 41 of LSU’s 78 team points came via the long jump, triple jump, high jump and pole vault. Mondo Duplantis won the pole vault, Rayvon Grey was victorious in the long jump and JuVaughn Harrison won the high jump to accrue 30 points. Tack on a fifth-place finish by Harrison in the long jump, a surprise seventh-place showing by Kenan Jones in the long jump, and a fourth-place finish by Christian Miller in the triple jump, and that gets you to 41 points. Add in Da’Quan Bellard, who did not compete indoors, and the men’s jump crew could be close to totaling 50 points for the Purple and Gold at the SEC meet. Harrison, Grey, and Miller all scored at the 2018 SEC outdoor meet for LSU, and Duplantis and Jones will be participating at their first SEC outdoor meet.

Two women who have the capability of making an impact on the SEC and national levels for the LSU women’s squad will be making their outdoor debuts this weekend. Kortnei Johnson will compete in the 100 meters and be an option for the 4×100 meter relay team, and pole vaulter Lisa Gunnarsson will compete for the Purple and Gold for the first time since January. Johnson is an eight time All-American and Gunnarsson owns the school record in the pole vault indoors.

One school record and 10 additional top-10 LSU marks have been registered this outdoor season by the Tigers. Mondo Duplantis set the school record at the final regular season meet of the season, the LSU Invitational (April 27), as he cleared 19′ 5.75” (5.94 meters) in the pole vault to set the school record by nine inches. Four additional LSU top-10 marks were registered at the LSU Invitational by the women’s squad. Amy Stelly cleared a personal best of 12′ 8” (3.86 meters) in the pole vault to rank No. 4 in school history, and Julia Palin ran a career-best 5,000 meter run time of 17:02.47 to also rank fourth in the record book. Hollie Parker (4:23.32/1,500m run) and Jurnee Woodward (56.82/400m hurdles) clocked the 10th-best times in their respective events at the LSU Invitational as well. The other six top-10 LSU marks that have been accomplished this season are listed below: