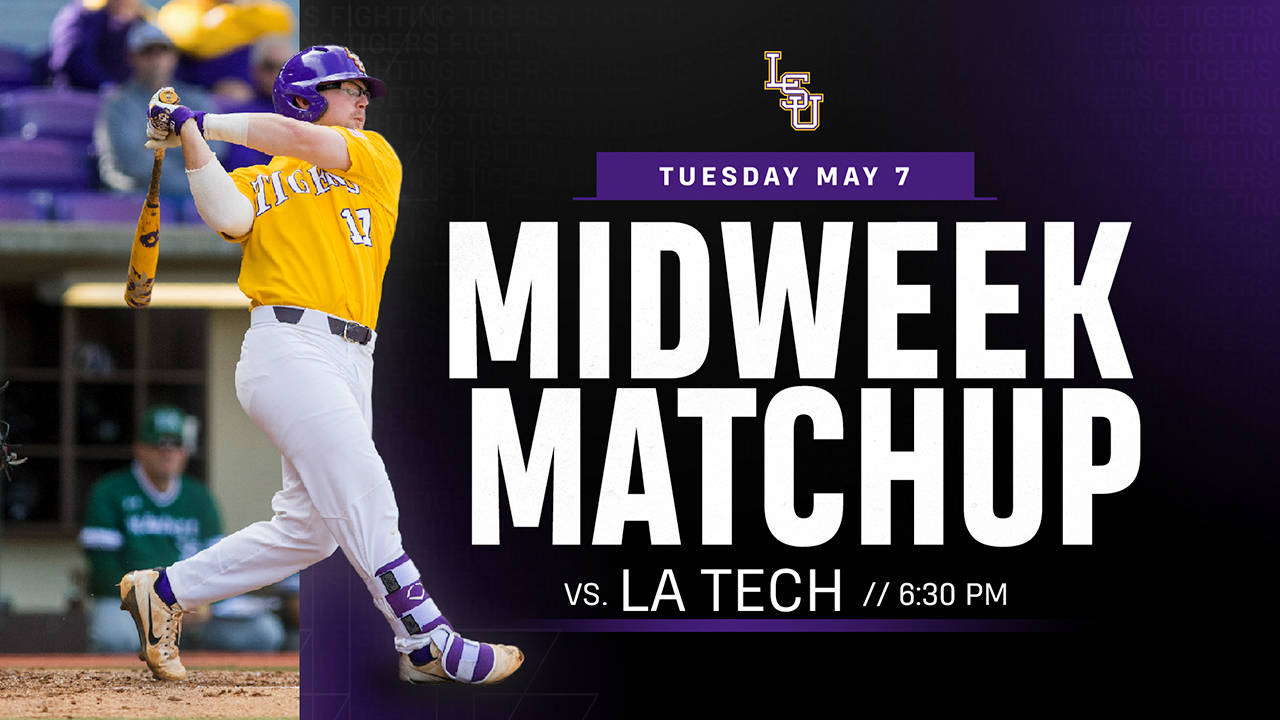 ONLINE
The game may be viewed via SEC Network +

QUOTING PAUL MAINIERI
“We’ve got a lot of work to do over these final eight games of the regular season, beginning with a very good Louisiana Tech ball club. We’re going to get our minds set and put a lot of emphasis on this game because it will have significant NCAA Tournament bid implications. We’re going to play as hard as we can and hopefully get a victory.”

ABOUT THE TIGERS
• LSU is 14-10 in the Southeastern Conference, and the Tigers are three games behind first-place Arkansas in the SEC Western Division standings … LSU plays at Arkansas this week in a three-game SEC series that begins on Thursday night
• The Tigers hit .331 (39-for-118) in last weekend’s Ole Miss series with six doubles, seven homers and 24 runs … the Tigers collected season-highs of 22 hits and five home runs in Sunday’s game against the Rebels
• Sunday’s game against Ole Miss featured a six-run LSU rally in the bottom of the ninth inning to tie the game at 15-15 … the uprising featured three home runs in three straight at-bats by rightfielder Antoine Duplantis, first baseman Cade Beloso and shortstop Josh Smith … the inning marked the first time LSU hit back-to-back-to-back homers since June 9, 2008, when the Tigers accomplished the feat in the first inning versus UC Irvine in Game 3 of the NCAA Super Regional … the consecutive ’08 homers were hit by DH Blake Dean, catcher Micah Gibbs and first baseman Matt Clark
• Senior rightfielder Antoine Duplantis hit . 538 (7-for-13) in the Ole Miss series with one double , one homer, six RBI and three runs … Duplantis raised his LSU career hits total to 330, and he is now No. 3 on the all-time LSU hits list … Duplantis needs just three hits to surpass Blake Dean (332 hits, 2007-10 for second place on the career hits chart, and he needs 23 hits to become LSU’s all-time leader … former first baseman Eddy Furniss (1995-98) currently holds the LSU career hits record (352)
• Antoine Duplantis became LSU’s all-time leader in at-bats during the Ole Miss series, as he now has 1,028 at-bats in his four-year career .. the previous at-bats record of 1,019 was held by former LSU shortstop Jason Williams (1993-96) … Duplantis tied the LSU career triples record earlier this season – he and former second baseman Todd Walker (1992-94) are currently tied at the top of the school list with 15 triples
• Junior shortstop Josh Smith hit .583 (7-for-12) in the Ole Miss series with one homer, four RBI and three runs … senior third baseman Chris Reid batted .462 (6-for-13) in the series with two doubles, one RBI and two runs
• Freshman first baseman Cade Beloso launched two homers in Sunday’s game against Ole Miss, marking the second multi-homer game of his career … Beloso also blasted two dingers on March 9 against California
• Junior right-hander Zack Hess, the Tigers’ No. 1 weekend starter throughout the past two seasons, was moved to the bullpen prior to the Ole Miss series, and he delivered a brilliant performance in Friday’s win over the Rebels … Hess worked four innings (55 pitches), allowing one run on three hits with one walk and seven strikeouts
• Sophomore catcher Saul Garza launched a three-run homer in Sunday’s game against Ole Miss, marking the third straight weekend he has homered in an SEC series (vs. Florida, at Alabama, vs. Ole Miss) … Garza had not homered this season prior to the April 18-20 Florida series

ABOUT THE BULLDOGS
• Louisiana Tech is 29-19 overall and 13-11 in Conference USA … the Bulldogs are in fourth place in the C-USA league standings behind Southern Miss, Florida Atlantic and Western Kentucky
• The Bulldogs are hitting .278 as a team with 47 home runs and 54 steals in 74 attempts … the Louisiana Tech pitching staff has a 4.58 team ERA
• Louisiana Tech is led at the plate by senior outfielder Mason Mallard, who is hitting .361 on the year with seven doubles, one triple, seven homers and 28 RBI … sophomore outfielder Steele Netterville has 16 doubles, one triple, seven homers and 36 RBI, and junior outfielder Parker Bates has 11 doubles, six homers and 44 RBI
• Louisiana Tech senior right-hander Braxton Smith is the Bulldogs’ closer, and he has nine saves and 50 strikeouts in 33 innings