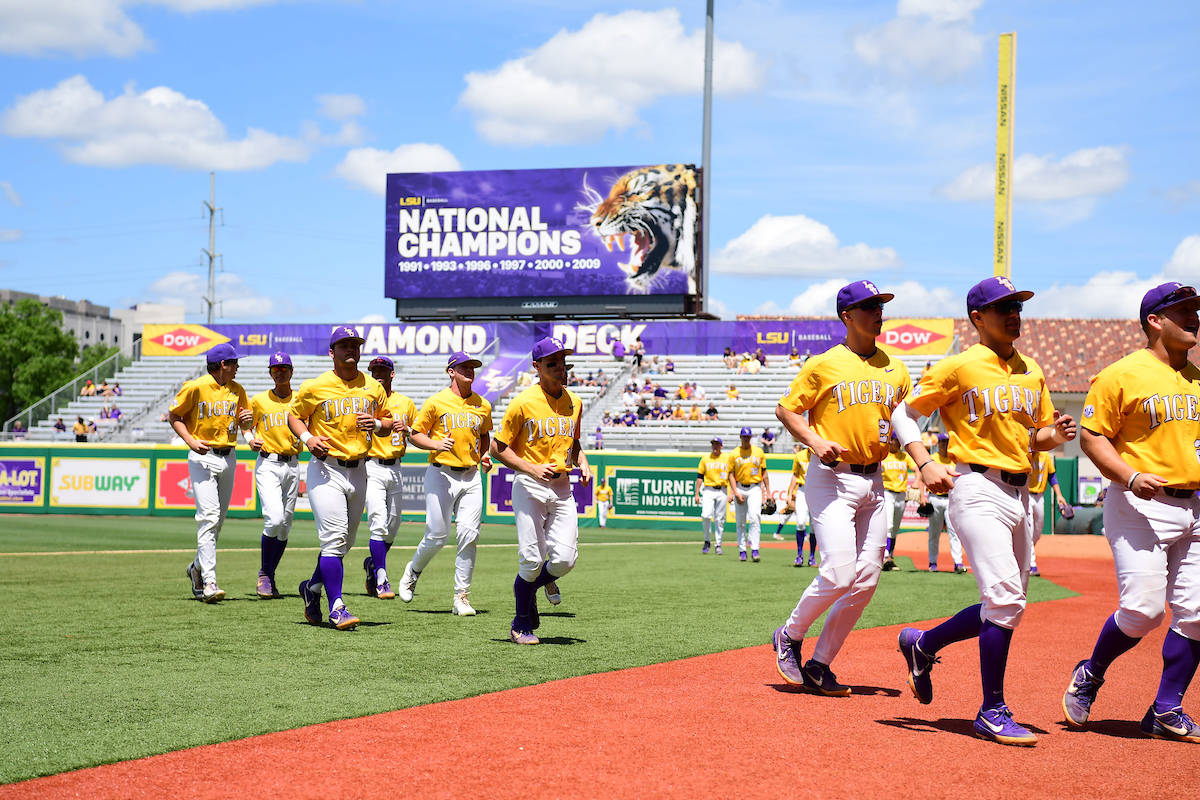 The Tigers are back at “The Box” Tuesday night for a 6:30 p.m. CT matchup with Louisiana Tech. The game will be broadcast on the SEC Network+ and it can be heard on affiliates of the LSU Sports Radio Network.

Ole Miss, however, responded with four runs in the top of the 10th to reclaim the lead.

Junior right-hander Austin Miller (4-0) earned the win for the Rebels, as he recorded the final out in the bottom of the ninth.

Sophomore Devin Fontenot (4-1), who entered the game in the top of the 10th, suffered the loss for the Tigers. He allowed four earned runs on three hits in one inning of work.

“You’ve got to give a lot of credit to Ole Miss,” said LSU coach Paul Mainieri. “They can really swing the bats; they’re a very tenacious offensive team and tough to pitch to. It’s a frustrating loss, but at the same time, I’m really proud of our guys for the fight that they showed in coming back. The back-to-back-to-back home runs we hit in the bottom of the ninth inning to tie the game were amazing.

“We’ve got to put this one behind us, come back out on Tuesday against Louisiana Tech, play as hard as we can and hopefully get a victory.”

Duplantis was 5-for-6 at the plate on Sunday with one double, one homer and five RBI. He moved up to third all-time in career hits at LSU with 330, surpassing Jason Williams, who had 327 hits from 1993-96.

Beloso was 3-for-6 with two homers and three RBI for the Tigers. Shortstop Josh Smith, had three hits, a homer and two RBI, while catcher Saul Garza blasted a three-run homer.

Landon Marceaux was the starter for LSU, and he pitched 2.1 innings, allowing seven runs, only three earned on eight hits.

Designated hitter Cole Zabowski hit a one-out double down the right field line to ignite the Ole Miss offense in the second inning. Catcher Cooper Johnson followed with a single to right that allowed Zabowski to score. First baseman Kevin Graham reached on a fielding error and second baseman Jacob Adams followed with a base hit that scored Johnson. Shortstop Grae Kessinger lined a two-out double to left center that allowed Graham and Adams to score and give Ole Miss the 4-0 lead.

Center fielder Ryan Olenek was hit by a pitch and Zabowski singled up the middle to start the third inning. Johnson hit a two-RBI single to right that scored Olenek and Zabowski. With Johnson on base, Adams singled through the right side and Johnson scored to give the Rebels a 7-0 lead.
Beloso sent a solo shot to right to leadoff the bottom of the fourth, increasing the Ole Miss lead to 7-1.

Designated hitter Brandt Broussard slapped a single through the left side to leadoff the bottom of the fifth for LSU. Right fielder Antoine Duplantis then stroked a base hit to move Broussard to third. Beloso singled up the middle, allowing Broussard to score. Shortstop Josh Smith reached on a fielding error by the right fielder and Duplantis scored. With Beloso on second and Smith on first, third baseman Chris Reid lined a double to right that scored Beloso. The Tigers put up three runs to cut into the Ole Miss lead, 10-4.

Zabowski hit a two-out single to left and Johnson followed with a double to score Zabowski and give the Rebels an 11-4 lead in the top of the sixth.
Broussard drew a one-out walk and center fielder Zach Watson doubled to left to start the bottom of the sixth. Duplantis dropped a base hit in right field that allowed Watson and Broussard to score and trim the Ole Miss lead, 11-6.

Adams hit a leadoff single to right to start the seventh. Third baseman Tyler Keenan singled to left with two runners on to load the bases. Left fielder Thomas Dillard drew a one-out bases loaded walk and Adams scored. Olenek then hit a sac fly to center to score another run to give Ole Miss a 13-6 advantage.

Ole Miss started the ninth with a double from right fielder Anthony Servideo and a single from Kessinger. Keenan followed with a single through the right side to score Servideo. Olenek hit a one-out single up the center that scored Kessinger to give the Rebels a 15-9 advantage.

Garza and Broussard both reached on two-out singles to set up Watson for the RBI single to the shortstop that scored Garza. With two Tigers on base, Duplantis launched a three-run homer to right. Beloso followed with a home run to right. Then Smith came to the plate and launched the third straight homer of the inning to right field to tie the game, 15-15.

Johnson drew a walk to start the 10th for Ole Miss. Graham doubled to left center and Josh Hall hit a two-RBI single to right to score Johnson and Graham. With Hall and Servideo on base, Kessinger dropped a single in left to score Hall. Keenan then grounded into a double play, but Servideo scored from second base to give the Rebels a 19-15 lead.