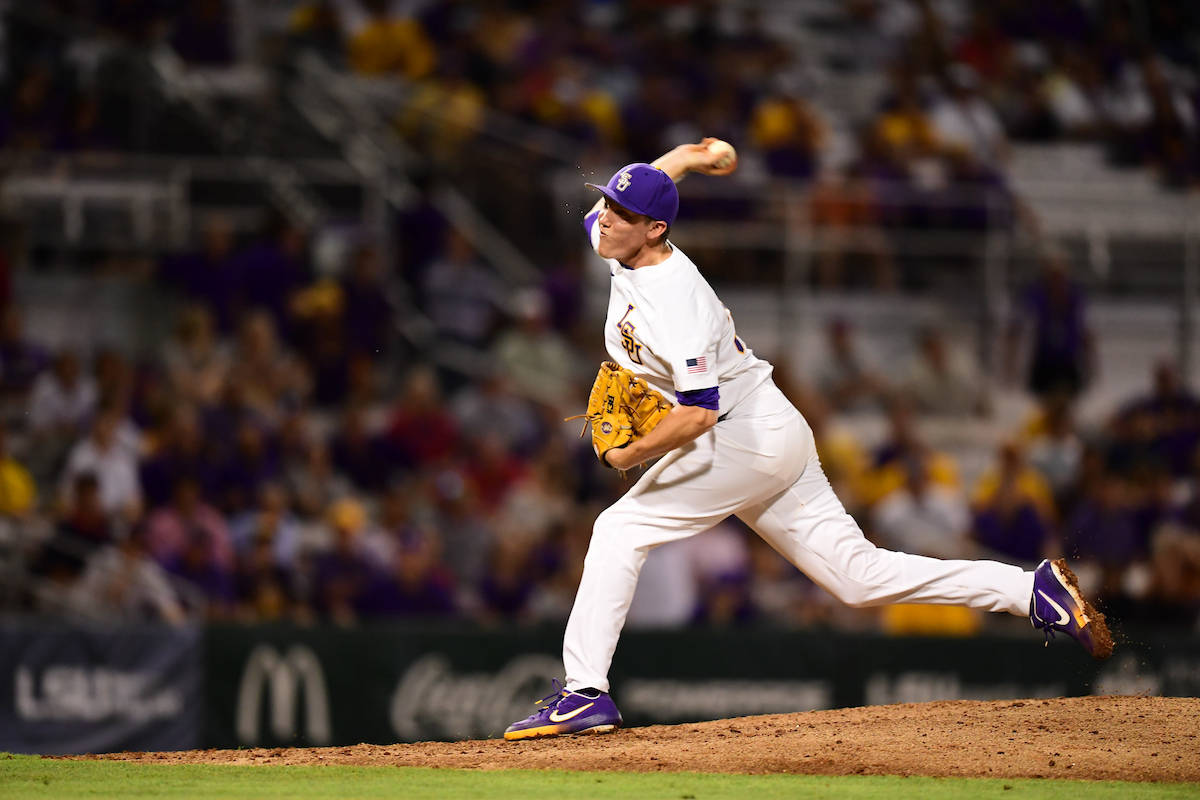 BATON ROUGE, La. – Behind four strong innings of relief from Zack Hess and back-to-back home runs by Drew Bianco and Daniel Cabrera in the bottom of the eighth inning, the No. 9 LSU baseball team earned the series opening victory against No. 13 Ole Miss, 8-3 Friday night in Alex Box Stadium, Skip Bertman Field.

In his second appearance out of the bullpen, Hess limited the Rebels to one run on three hits, walked one and struck out seven to earn the win and improve to 3-3 on the year.

“This game had a little bit of everything, and it turned out to be a great victory for us,” said LSU coach Paul Mainieri. “I just thought Zack Hess was unbelievable tonight. I just couldn’t take the ball away from him; we had the lead, and he was throwing so many strikes. I had only intended on him going a couple of innings, but he was throwing so many strikes and was looking so good, I figured we should try to ride it as far as we could.”

Cabrera’s home run was his team-high ninth of the season, and Bianco’s was his third. It was the first time LSU hit back-to-back home runs since April 13, 2018, against Tennessee when Hunter Feduccia and Jake Slaughter hit consecutive solo home runs in the third inning.

Game 2 of the series between LSU and Ole Miss is slated for Saturday at 6:30 p.m. CT in The Box. Prior to the game, the 2009 National Champions will be honored, and tickets for the Star Wars night contest at $4 at LSUtix.net. The game will be broadcast online through the SEC Network+, and fans can listen to the game on the LSU Sports Radio Network, including 98.1 FM in Baton Rouge.

Sophomore right-hander Ma’Khail Hilliard threw four solid innings for the Tigers to start the game. He allowed two runs on six hits and struck out four. Devin Fontenot closed things out for the Tigers, shutting out the Rebels in his one inning, walking three and striking out one.

“Ma’Khail did a really nice job for us,” Mainieri said. “He gave us four innings, and we tried to get one more inning out of him, but we had to go to Hess with runners at first and third and nobody out in the fifth. Zack got the double play ball, and then he struck out the next batter to end the inning.”

Ole Miss starter Will Ethridge was charged with the loss and dropped to 5-4 on the year after allowing four runs—three earned—on seven hits and struck out four in seven innings.

“Offensively, I thought we did some really good things,” Mainieri said. “I like the balance we have in our lineup right now. Having (second baseman) Gavin Dugas in the lineup has brought a lot of energy to our team.”

Ole Miss first baseman Kevin Graham came around to score in the top of the second on a ground ball by Jacob Adams after leading off the inning with a base hit, giving the Rebels a 1-0 lead.

With one out and runners in scoring position after a single by third baseman Chris Reid and a double by Dugas, left fielder Daniel Cabrera slapped a ground ball back to the first baseman to bring in Reid and tie the game 1-1.

The Tigers brought in two runs in the bottom of the third, extending the lead to 3-1 after shortstop Josh Smith slapped a two-out single into center field to bring in catcher Saul Garza and right fielder Antoine Duplantis, who recorded base hits earlier in the inning.

Right fielder Anthony Servideo and Adams started the top of the fifth with back-to-back base hits to put runners on the corners before LSU turned the ball to Hess. With one pitch, Hess induced a double play, which allowed Servideo to score, before recording his first strike out, cutting the LSU lead to 3-2.

With Smith on first base after a leadoff single in the bottom of the sixth, Dugas roped a ball straight at the first baseman, who was unable to come up with it, allowing Smith to score on the error and making it a 4-2 game in favor of the Tigers.

Ole Miss catcher Cooper Johnson took the first pitch he saw in the top of the seventh and deposited it over the left field wall for a solo home run, his sixth of the season.

After loading the bases in the top of the eighth inning, Hess struck out Johnson swinging for his seventh K of the night and put “The Box” on its feet.

“Zack was tired, but he found some inner strength there at the end of the eighth to get the strikeout of Johnson and preserve the lead,” Mainieri said.

In the bottom of the eighth inning with first baseman Cade Beloso and Smith in scoring position after back-to-back base hits and a sac bunt, Dugas hit a ball to deep right field for a sacrifice fly to bring in Beloso before Cabrera hit a two-run shot and Bianco followed with a solo homer.