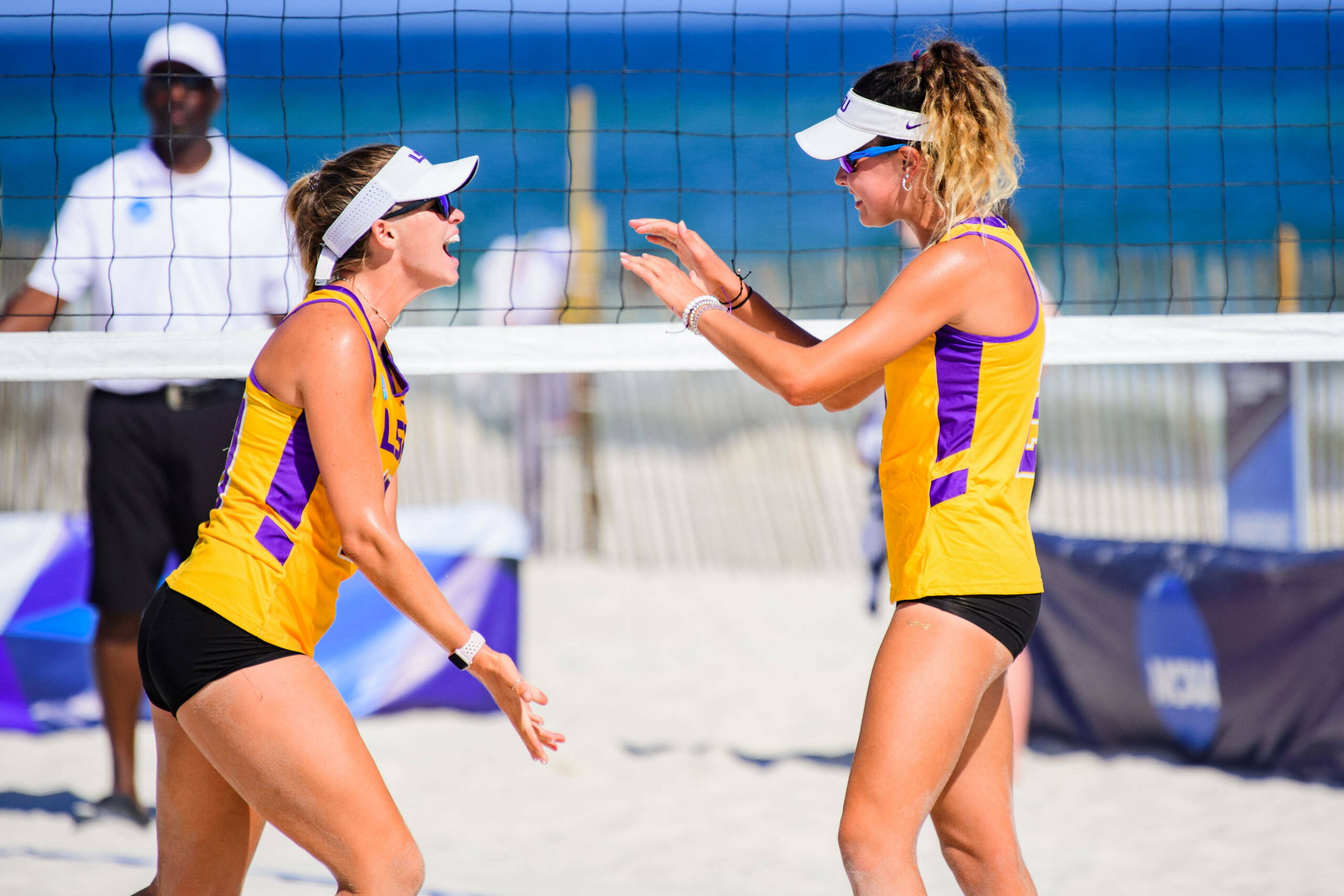 GULF SHORES, Ala. – After a sweep over Pepperdine Friday morning, the LSU Beach Volleyball team won a nail biter over Stetson, 3-2, clinching a spot in the NCAA Semifinals for the first time in program history.

This is the first time that LSU has swept through the first day at the NCAA Championship. In two prior trips to Gulf Shores for the event, LSU had accumulated one win in both 2017 and 2018.

“It’s awesome to make history for our program,” said sophomore Hunter Domanski who was a part of the 2017 team that went to Gulf Shores.

With the win, the Tigers are guaranteed a match on Sunday due to the championship’s double-elimination format. LSU, who has finished No. 6 in each of the past two seasons, will undoubtedly earn its highest finish ever at the NCAA Championship no matter what transpires over the next two days.

LSU defeated Pepperdine Friday morning to get into the match against Stetson. For the Hatters to make it to the match, it took the largest upset in the history of the NCAA Championship. Stetson, the No. 8 seed, took down top-seed USC to begin the championship. They carried that underdog mentality into Friday afternoon’s match against the Tigers.

LSU got rolling strong on Court 4 with Olivia Beyer and Maddie Ligon. The pair that clinched LSU’s match over Pepperdine would earn their second straight-set win of the day, 21-8 and 21-19. Shortly thereafter, though Kelli Agnew and Olivia Powers would stumble on Court 2, 21-16 and 21-18.

Like a pendulum, the match would swing back in favor of the Tigers when Claire Coppola and Kristen Nuss earned their second win of the day, 21-14 and 21-16, on the top court.

Ashlyn Rasnick-Pope and Toni Rodriguez fell in the first set on Court 3, 21-17, but rebounded nicely, 22-20, to force a deciding set.

Meanwhile, as the third set was taking place on Court 3, Allison Coens and Hunter Domanski were in a battle on Court 5. The LSU duo that took a  21-5 record into the match won the first set, 22-20, but dropped the second, 21-18.

It looked as though LSU would potentially clinch on Court 3, but with the set tied at 15 a piece, Stetson scored back-to-back points, evening the match, leaving it all up to Court 5.

All the attention shifted to Court 5 and the tension was sky-high. With the set tied at 13, Coens and Domanski scored two consecutive points, clinching the match and sending the Tigers to the semi-finals. It was the pair’s ninth three-set victory on the season.

“For Al and Hunt once again to come through in a three-set match, props to them for pulling it out,” said Brock.

“Throughout the year, Hunter and I in the third set, have always just been focused on playing our game,” said Coens. “With all of our fans’ and teammates’ support, we got that extra energy to push us to the next level.