2009 National Champs to be Honored on Saturday 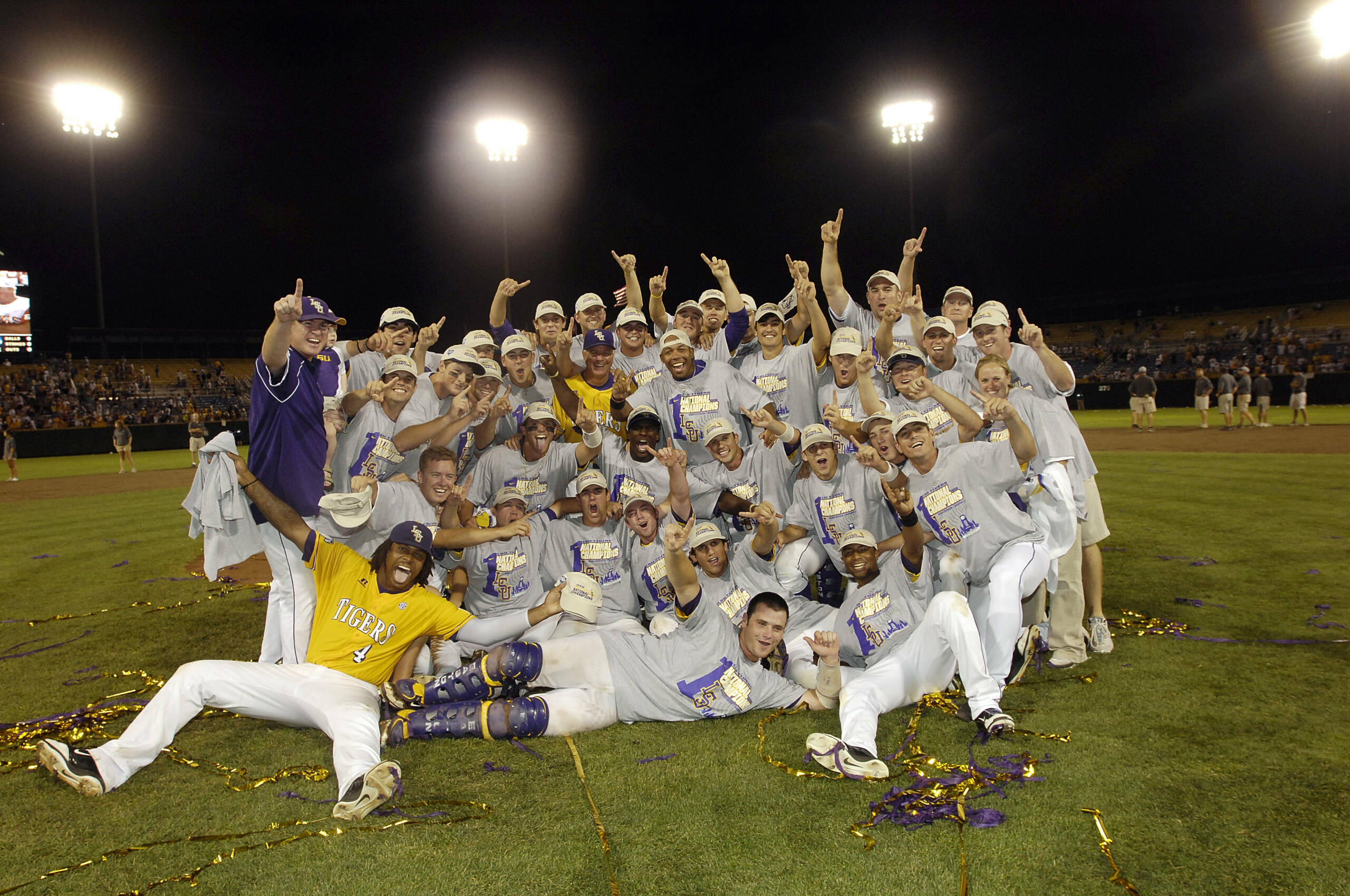 BATON ROUGE, La. — LSU will honor on Saturday its 2009 national championship baseball team as it commemorates the 10-year anniversary of the Tigers’ College World Series title.

Members of the ’09 squad will be recognized prior to Saturday’s 6:30 p.m. CT game versus Ole Miss in Alex Box Stadium, Skip Bertman Field.

LSU coach Paul Mainieri directed the 2009 Tigers to the College World Series title, posting a 56-17 overall record, including a 10-1 mark in NCAA Tournament competition. The Tigers defeated Texas in the CWS Championship Finals to win the national title, LSU’s sixth CWS championship and its first since 2000.

Mainieri also guided his squad to the 2009 Southeastern Conference regular-season and tournament titles.

“Obviously, the 2009 team will always be very special to me,” said Mainieri, who is in his 37th season as a collegiate head coach. “When you win it all, it’s an amazing feeling, and it’s going to be great to see those players again this weekend. Winning a college baseball national championship is something that is very difficult to accomplish, and that team met every challenge in order to hold up the trophy at the end.”

“It’s going to be a great time seeing everybody again this weekend,” Gibbs said. “The ’09 team featured great camaraderie and tremendous leadership. The older guys on the team made sure that we brought our best effort to the field every day. We had each other’s backs, and we were all working toward the same goal.”

The 2009 season was a magnificent year that began with LSU ranked No. 1 in the polls and ended with the Tigers still occupying college baseball’s summit.

LSU played host to the 2009 NCAA Baton Rouge Regional, where the Tigers defeated Southern, Baylor and Minnesota to set up a Super Regional matchup versus Rice in Alex Box Stadium. LSU swept two games from the Owls, earning a berth to the CWS for the second straight season.

The Tigers defeated Virginia in their CWS opener and recorded two wins over Arkansas to advance to the CWS Championship Finals versus Texas. Trailing 6-4 in the ninth inning of Game 1, the Tigers staged a dramatic two-run rally and eventually prevailed, 7-6, in 11 innings. The Longhorns posted a 5-1 win in Game 2; however, LSU overwhelmed UT, 11-4, in the deciding game to claim the NCAA championship trophy.

Coleman, Ranaudo and Matty Ott earned 2009 All-America recognition. Coleman was the ’09 SEC Pitcher of the Year, and he finished the season ranked No. 2 in the nation in wins (14) and No. 4 in strikeouts (142).

Ott, the SEC Co-Freshman of the Year, established an LSU single-season record with 16 saves.

Schimpf finished his career No. 10 on the all-time LSU home run list with 38 career dingers. He had three home runs in the 2009 College World Series and finished the season with 22.

Junior outfielder Jared Mitchell was named the 2009 CWS Most Outstanding Player, and he finished his career No. 2 on the all-time LSU steals list with 70.

Junior DH/OF Blake Dean completed the 2009 season ranked No. 8 on the all-time LSU home run list with 44 dingers, and he was No. 6 on the LSU career RBI list with 190.

“It was an incredible run and an amazing team,” Mainieri said. “They joined the prestigious fraternity of College World Series championship teams at LSU that will always be remembered.”