Beach Eager to Make Biggest Leap Yet at 2019 Nationals 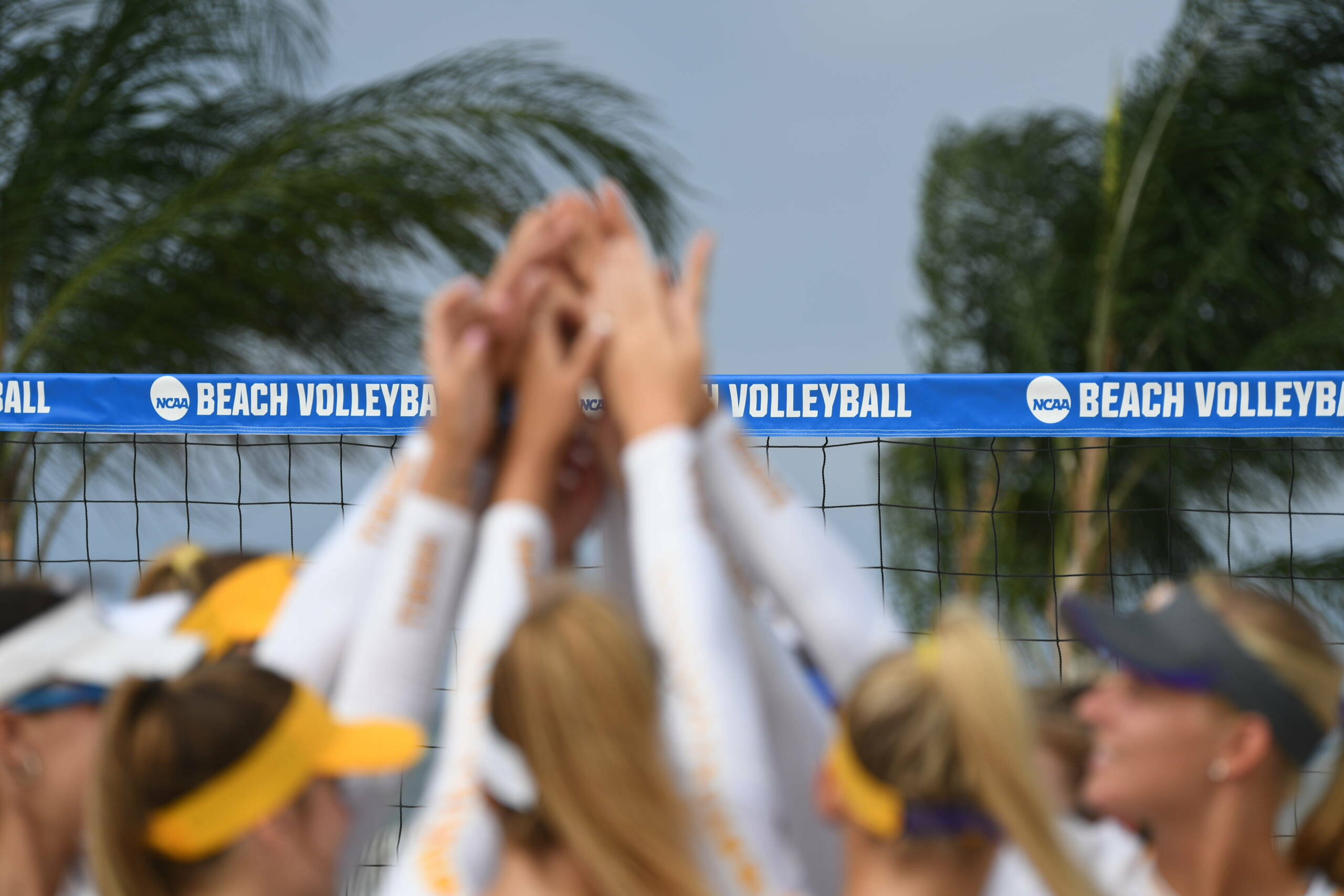 It was six years ago, but Cati Leak can still remember it like it was yesterday.

A freshman on LSU’s inaugural beach volleyball team in the spring of 2014, Leak – now a first-year assistant coach with the program, which is set to play in the NCAA Championships from May 3-5 in Gulf Shores, Alabama – can still see her coach’s face, clear as day.

“I vividly remember Fran Flory telling us,” Leak recalls, “even before we got started, saying: ‘Take this in. You’ve made history.’”

Leak knew, then, how cool it was to be a part of starting something. She just didn’t know exactly what she was starting.

“Getting to go into that season of learning and failing and really sucking at the sport, we always had hope and carried that history with honor – getting to create something,” Leak says. “That year was pretty rough, not knowing any skills, learning on the fly.”

Six years later, the program that went 6-10 in its first year and failed to win three matches in a row would has reached its third straight NCAA Championships and established itself nationally as one of the sport’s premier programs.

Now, it aims to take its biggest step yet.

“THERE WAS NOTHING THERE”

For head coach Russell Brock – who served as the Flory’s associate head coach for three seasons before taking the reins in 2017 – going from upstart to mainstay has been an incremental process, a long journey traveled by small steps.

“Every year, when we started, we had these really basic skills we had to implement across the board,” Brock says. “The first year, we had to learn how to pass and really understand the game of beach volleyball, because we had four people who really didn’t know what they were doing, and we had another eight people who had no clue what they were doing. It was very basic.”

“Every year, there was a building of the technical side of the game,” Brock says.

A primary building block, he says, was recruiting players like junior Claire Coppola, who, alongside partner Kristen Nuss, already holds the program’s wins record with 89 – and counting. A two-time beach state champion as a prep in Scottsdale, Ariz., Coppola bought into LSU’s vision of what the program could become, rather than what others perceived it to be at the time.

“Honestly, I think it was players like Claire that we saw potential in,” Brock says. “They believed in our vision, because we weren’t good enough to garner the interest of anyone who was good on a national stage, according to other people. They had to believe what we were selling, because what we had to show – we didn’t have a stadium, we didn’t have the wins where they would expect to go to nationals and compete for nationals and compete for national championship. There was nothing there.”

Nothing tangible, at least. But there was a vision, and there was a culture. Just as important to Brock as a foundation of fundamentals was establishing that family atmosphere and that genuine, authentic feel for the program. He worked carefully to not only recruit talented freshmen, but also to bring in graduate transfers and crossovers from indoor volleyball to speed up the program’s development.

“You have to develop the trust, the commitment,” Brock says. “When we bring in kids from indoor or fifth-year kids who could infuse some culture. That’s one of the things we were able to fast-track, because of the people we were able to infuse and graft into our family. They brought things, wisdom, knowledge, experience that was beyond what our recruits who have never been in college before could bring.”

“He was so personable and wanted to know about my day,” Coppola says. “I was just a high school student. He didn’t care, but he made it seem like he cared.

Coppola watched a few practices. She got a feel for the vibe and for the talent. She saw what was in front her, and she saw what could be in her future.

“I thought they were so good,” she remembers. “I was like, ‘Wow.’ And also, I was not very good. But Russell had a plan for how they were going to accomplish all these things, and I believed him.”

ON THE FAST TRACK

“Absolutely, positively, we experienced favor, supernaturally, with our group,” Brock says. Our ability to be a little tighter, a little more moldable, a little less critical of where we were or should be, to get a little faster to where we could.

“To experience some wins maybe we didn’t deserve early on. You need those if you’re going to fast track the process and develop the confidence it takes to keep pushing. We were able to get over that hump and get some wins that helped us believe we were closer than it actually was.”

The next season – Coppola’s first year, Leak’s last – the Tigers took off, riding a 23-match win streak to the CCSA Tournament semifinals and a berth in the 2017 NCAA Championships. There, LSU lost its first match before beating Long Beach State in its second to secure a top-six finish.

The Tigers matched that finish last season, falling to No. 1 UCLA in the third match of the double-elimination event.

“Maybe we got to nationals a little ahead of schedule,” Brock says. “Maybe even last year, being a top five or six program nationally was a bit ahead of schedule. But this is the year we thought, okay, we can absolutely be the team that can go in as a top team with expectations of winning matches and pushing people for a title.”

As the successes stacked up, the Tigers made sure not to skip past them. When they started tasting success, they savored it.

“That’s something our program has always done well: celebrate well,” Leak says. “Every little milestone we’ve hit, whether it was faster than we expected or not, we’ve celebrated that and appreciated it.”

“THIS YEAR IS THE LEAP”

The opening of the program’s state-of-the-art, on-campus arena, coupled with an elite recruiting class and a strong core of returning, proven veterans, has propelled the 2019 Tigers back to Gulf Shores for a third straight time.

The last two appearances, the Tigers, admittedly, were happy to be there. That’s not the case this season. Years of work have gone into this appearance. They want more this go-round, and Brock is preaching a mindset of aggression ahead of Friday’s opener against Pepperdine.

“We have to impose our will,” he says. “It’s not that they won’t resist. Everybody’s going to resist. But if we trust our training and we go in to beat people and not play against people, then we can unlock our potential. That’s really what our mindset needs to be as we head to Gulf Shores.”

The field is loaded but familiar. LSU has wins over Stetson, Cal-Poly, Hawaii, Pepperdine, and Florida State, and the Tigers have faced every team in the tournament.

“Everybody there is going to be good,” Brock says. “But we also know, the vast majority of those teams, we’ve proven we can compete, and we’ve played with everybody there. Now it’s just a matter of us driving forward and executing – without fear – what we know we can do.”

The good news: LSU can expect plenty of support in Gulf Shores. Tigers roam the sands of its beaches year-round, and they’ve packed The Hangout every time LSU’s been there.

“My freshman year, there was a sea of purple and gold,” Coppola says. “It was so cool, especially when it came down to one court, and everyone swarmed there. That was all you saw. It definitely makes a difference with the energy and the way you play. You want to put on a show for the people watching you.”

Coppola knows the task her team faces. Each step to this point, small as they started, has gotten bigger and bigger. No stride will be larger than pushing past the standard that’s been set and setting a new one.

“From what I’ve learned, it’s a whole new ballgame to make nationals,” she says. “It’s very hard to make semi-finals. Then the next step is to make the finals. And then win a championship. We have done incredible, and we have a lot more to improve on. But this year is the leap. We’ve gotten fifth the last two years. We need to make more strides for LSU Beach Volleyball.”