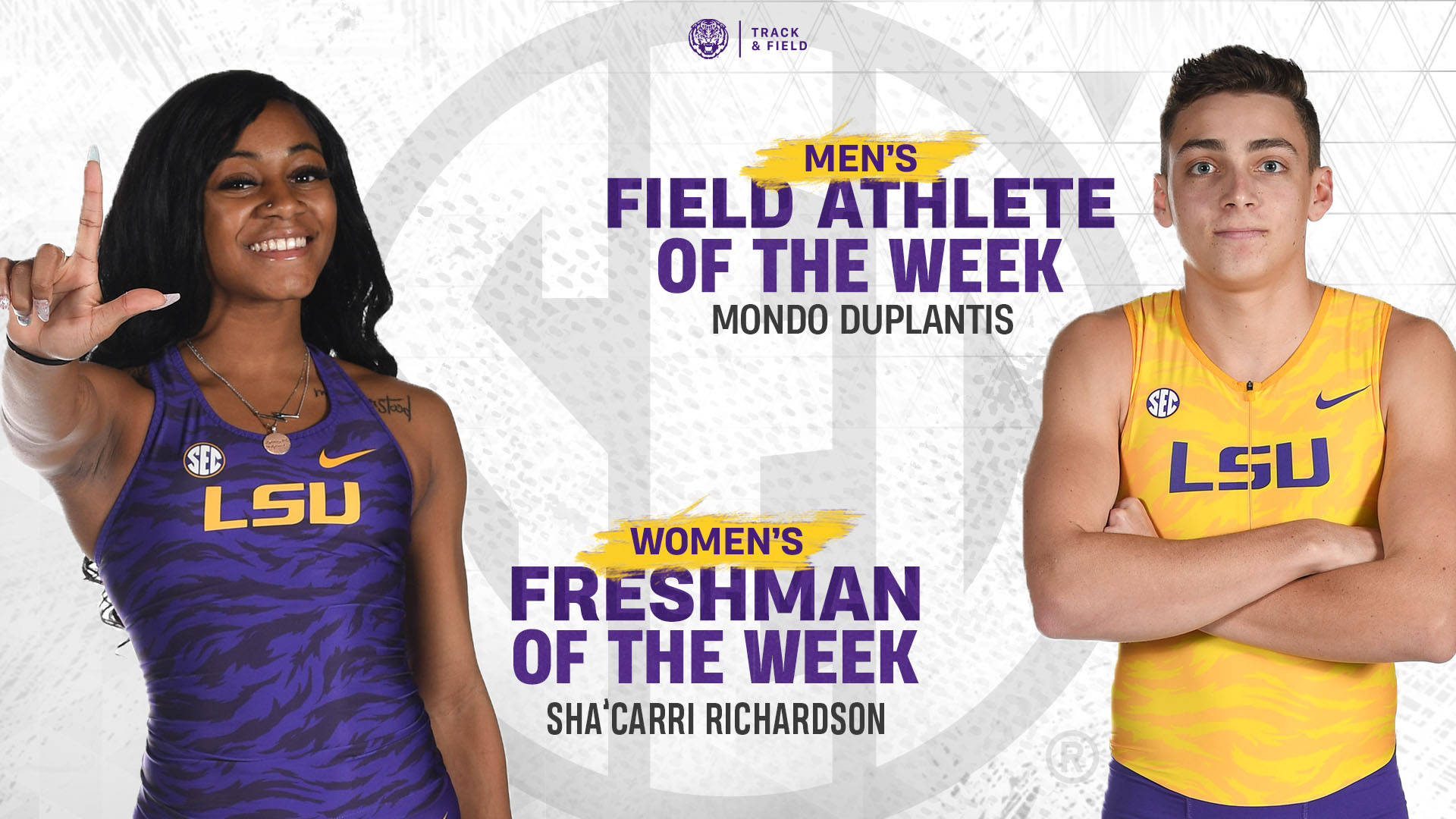 Baton Rouge, La. – For the second week in a row, Sha’Carri Richardson and Mondo Duplantis have been picked as SEC Athletes of the Week in their respective categories. The conference office announced on Tuesday that Richardson was the SEC Women’s Freshman of the Week and Duplantis was the SEC Men’s Field Athlete of the Week.

Richardson was an absolute work horse on Saturday at the final home meet of the season for LSU – the LSU Invitational. The freshman from Dallas, Texas, raced three times and was the victor in every single race. Her day started off as the anchor of the women’s 4×100 meter relay that claimed gold with a time of 43.75 seconds. Richardson got the baton on the final leg with about five meters between her and the lead runners from Ole Miss and Alabama. Richardson did what she has done most of the year and chased down the leaders in the home stretch to claim gold for the Lady Tigers. Richardson did that at 12:30 p.m., and in less than an hour, she’d be back on the track in the 100 meters.

Richardson, who has run a wind-aided 10.91 (+4.3) with a strong tailwind this season, clocked her best NCAA legal time of the year in the 100 meters with a readout of 11.06 to win the race. It was the third fastest time in the NCAA this season, and the fastest by a freshman. Richardson is currently the only SEC runner to be ranked in the top 10 of the 100 meters on the women’s side. In her final performance at the LSU Invitational, Richardson returned to the track to close out her day in the 200 meters exactly 30 minutes after her 100 meter performance. She ran a personal best of 22.78 in the 200 meters to claim gold along with the sixth-fastest time in the NCAA. The times of 11.06 and 22.78 make Richardson one of only two athletes in the NCAA to currently own top-10 times in the 100 and 200 meters. She joins the likes of 2019 NCAA indoor national champion Kayla White of North Carolina A&T Richardson is the only freshman to have top-10 times nationally in the 100 and 200 meters.

Duplantis, who was already honored as the U.S. Track & Field and Cross Country Association Men’s Division I Athlete of the Week earlier Tuesday, added his second SEC honor of the outdoor season. Duplantis became the second-best collegiate pole vaulter outdoors with a world-leading clearance of 19′ 5.75” (5.94 meters) on Saturday at the LSU Invitational. The clearance of 19′ 5.75” broke his own Bernie Moore Track Stadium facility record and made him the NCAA leader in the pole vault for the 2019 season. The mark moved him from No. 3 on the LSU outdoor list to No. 1 as he surpassed Russ Buller (18′ 8.75”/2000) and his dad, Greg (18′ 5.25”/1986), for the best mark in school history.

The LSU track and field team will be back in action May 9-11 at the SEC Championships in Fayetteville, Ark.

Prior SEC Athletes of the Week