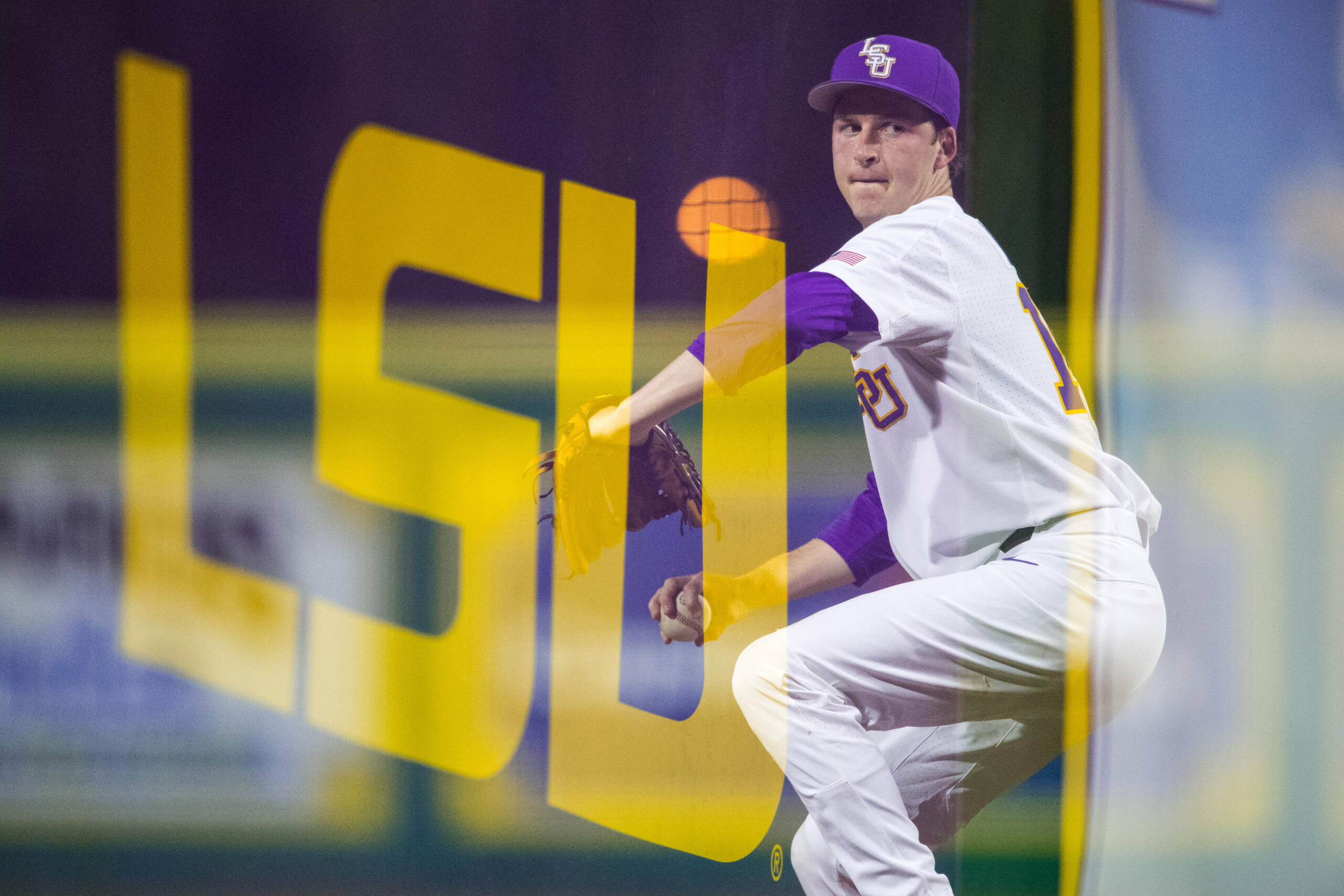 Chatting in the outfield during a game of catch with pitcher Eric Walker, whose 5.2 innings of one-run ball led LSU to arguably its biggest win of the season Saturday at Alabama, Mainieri couldn’t help but draw on his impeccable memory.

“That was very Jared Poche-ish,” Mainieri said, likening his sophomore righty to the winningest pitcher in school history. “Jared Poche did that so many times in his career. If we didn’t win Friday night, Jared pitched in the game two and came up with a marvelous performance, and that’s what Eric Walker did. He just pitched like a seasoned veteran and a leader of the team.”

When LSU needed Walker most, he delivered over the weekend, keeping the Tigers’ SEC West title hopes alive with three weeks to play and erasing a Mainieri mistake.

Going into last weekend’s road series, the Tigers (29-16, 13-8 SEC) sat just a game back of the division lead. Though Alabama entered at just 4-14 in SEC play, Mainieri knew the Tide posed a serious threat.

In an effort to get his team to see the big picture, however, the Tigers’ head coach did something he’s never done before: he challenged his team to pick up the sweep.

“I used the S-word,” Mainieri joked Monday, “and I never will use it again.”

He knew the dangers: that Alabama was too good to overlook, and that offering a big picture view might backfire and cause them to overlook one of the games. The intention was the opposite: to hone in their focus and raise the level of expectation.

“I was trying to make them understand how important the whole series was,” Mainieri said. “After that first night” – a 6-1 Tiger defeat – “I was hoping we’d avoid getting swept. To talk about sweeping, it’s for the fans and the media, not the players and coaches.”

Enter Walker, who moved up from his normal Sunday starting role to Saturday in place of injured ace Cole Henry. Like Poche, Walker doesn’t possess electric velocity – though his fastball did reach into the 90s on Saturday – or devastating off speed stuff. But his command, confidence, and competitive mindset proved critical in game two, as he struck out a career-high nine batters and stranded six runners to turn the momentum of the series back in LSU’s favor.

“After the game Friday, we were down,” Mainieri said. “I let the players know it was unacceptable at the level of competing. What did we need? We needed a starting pitcher to go out there on Saturday and assert himself, and that’s exactly what Eric Walker did.

End 2 |  @EricWalker_8 gets out of the inning and strands men in scoring position with a HUGE K.

Due up: Mathis, Watson and Duplantis.

“And that’s why I’ll always believe in that kid. I saw it in him early, and I knew that he’d be a winner, and nothing he’ll ever do will change my mind about that.”

The other turning point in the series came in the form of a lineup change, sparked by Friday’s loss. Discouraged by the Tigers’ offensive showing in game one – LSU struck out 11 times and stranded eight runners in a 6-1 loss – Mainieri tweaked his batting order, moving Zach Watson to the leadoff spot, putting Josh Smith in the cleanup role, making Cade Beloso his three-hole hitter, and inserting Gavin Dugas into the starting lineup and the fifth spot in the order.

“I was really upset Friday night after the game, not because we lost, and not because we didn’t get a lot of hits,” Mainieri said. “(Sam) Finnerty is a good pitcher. I just don’t like not seeing competing. We took six called third strikes on Friday night, and that distressed me quite a bit. What does really bother me is when we don’t dig in with two strikes and fight the guy until the end. You just want them out there competing, and we took six called third strikes and then turned around and complained to the umpire. That’s just not what I want to see, so I switched it up a little bit.”

It worked. Watson led the charge from the top on Saturday, with three hits and three RBI, all on a three-run homer in the fourth inning. Dugas, meanwhile, picked up three hits in eight at-bats, giving Mainieri that extra edge he was seeking from his hitters best exemplified by a mighty Sunday hack the freshman offered on a 3-0 green light.

The next pitch: Dugas blasted a two-RBI single to extends the Tigers’ lead early Sunday.

Mid 3 | No better way to describe that than CLUTCH! @gavin_dugas04 makes it a 4-1 game with that base hit! #GeauxTigers

“He was a spark plug for us,” Mainieri said of Dugas. “I thought Gavin gave our team a real jolt. He’s not afraid. My favorite swing he took in the three days was the 3-0 green light I gave him when he swung so hard he fell down. That’s what I’m talking about! A 3-0 swing, that’s what I want to see.”

– Mainieri also praised the Sunday start from Landon Marceaux. Back in the weekend rotation, Marceaux gave up just two runs in five innings. The freshman battled from a bases-loaded, no-outs start to strike out the next two batters and limit the early damage, before controlling the Tide lineup the rest of the way with his fastball command and heavy curve. “I thought that was a big step forward for him, gave him a lot of confidence going forward,” Maineri said. “As long as he’s healthy, I think he’s going to go some good things for us going forward.”

– Henry went home this weekend to Alabama while dealing with arm soreness and threw with his dad, who was also his high school pitching coach. There’s some cautious optimism that the freshman could be back in the rotation soon. “All indications are he’s doing much better,” Mainieri said. “Now, does that mean he’s going to pitch this weekend? I don’t know yet.”

– Jaden Hill is also nearing a return, though Mainieri isn’t sure of a time frame. Another freshman battling arm soreness, Hill threw Sunday with “more length than he’s thrown in a long time, and felt great,” Mainieri said. “I don’t know if he’ll be back for Auburn, the SEC Tournament or the NCAA Tournament… but if he can get back, even if we use him for short stints out of the bullpen, it’d be another quality arm for us. You never know when that might factor in.”

LSU is 11-3 in one-run games this season, the latest coming Sunday. “Every year I say, the season will be defined by how you do in the one-run games,” Mainieri said. “Some years, we haven’t done 11-3, and the year has been not to the level we wanted, and other years we’ve won the one-run games and gone on to do great things. It doesn’t matter how you got here. You are where you are.”

The Tigers went 3-1 last week and are gearing up for a big weekend at The Box! #GeauxTigers