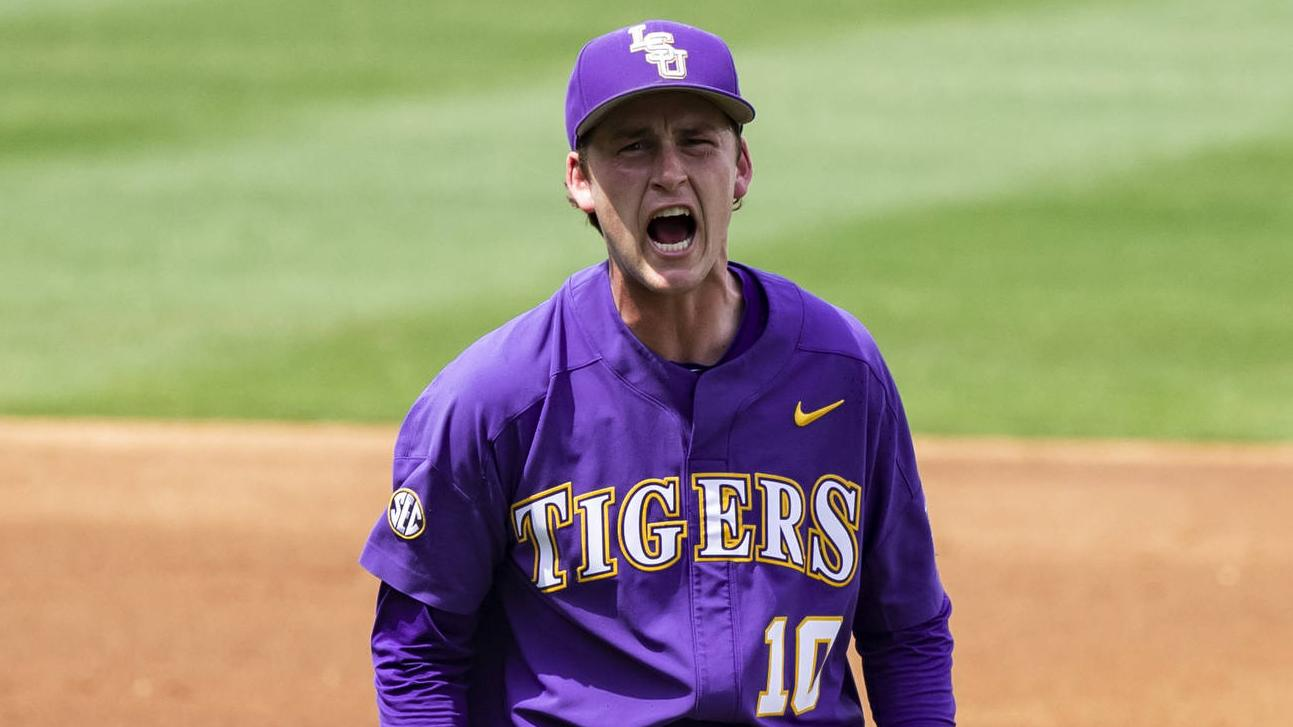 TUSCALOOSA, Ala. – Sophomore right-hander Eric Walker limited Alabama to one run over 5.2 innings Saturday to lead ninth-ranked LSU to a 5-2 win over the Crimson Tide in Sewell-Thomas Stadium.

The weekend series, tied at one game apiece, concludes at 1 p.m. CT Sunday in a game that can be heard on the affiliates of the LSU Sports Radio Network and viewed online via SEC Network +.

Walker (4-3) fired a career-high nine strikeouts while allowing one run on five hits with three walks in his 5.2-inning outing. He threw a season-high 105 pitches to earned the victory.

“Eric was phenomenal with nine strikeouts, and his velocity was up to 90 miles per hour, which is very encouraging,” said LSU coach Paul Mainieri. “His command was really good – I was hoping to get at least four innings out of him, and he gave us nearly six. He did a tremendous job, he’s a great competitor and leader for our team.”

Right-hander Devin Fontenot picked up his fifth save of the season, working 1.1 perfect innings with two strikeouts.

Alabama starter Brock Love (4-4) was charged with the loss, as he surrendered four runs on five hits in 3.2 innings with three walks and three strikeouts.

Centerfielder Zach Watson paced LSU at the plate by going 3-for-5 with a three-run homer that gave the Tigers a 4-1 lead in the top of the fourth inning.

“We had much better at-bats and execution today at the plate,” Mainieri said. “We had some clutch hits, and obviously the home run by Watson was huge; he really came through with a big swing.”

Alabama leftfielder Keith Holcombe provided the Tide’s only run against Walker, when he led off the bottom of the first inning with a solo homer, his fourth dinger of the season.

The Tigers tied the game in the third on an RBI single by first baseman Cade Beloso, and LSU surged ahead, 4-1, in the fourth on a three-run homer down the left field line by Watson, his fifth dinger of the season. The home run was initially ruled a foul ball, but video replay overturned the call and confirmed the home run for Watson.

The Tigers extended the lead to 5-1 in the fifth against reliever Garret Rukes, when a sacrifice bunt by third baseman Chris Reid scored shortstop Josh Smith from third base.

Alabama narrowed the gap to 5-2 in the seventh against reliever Todd Peterson, when rightfielder Tyler Gentry delivered an run-scoring single. Peterson worked two innings in relief of Walker, allowing one run on five hits with no walks and one strikeout.