Mainieri Looking for Arms to Emerge in Henry's Absence 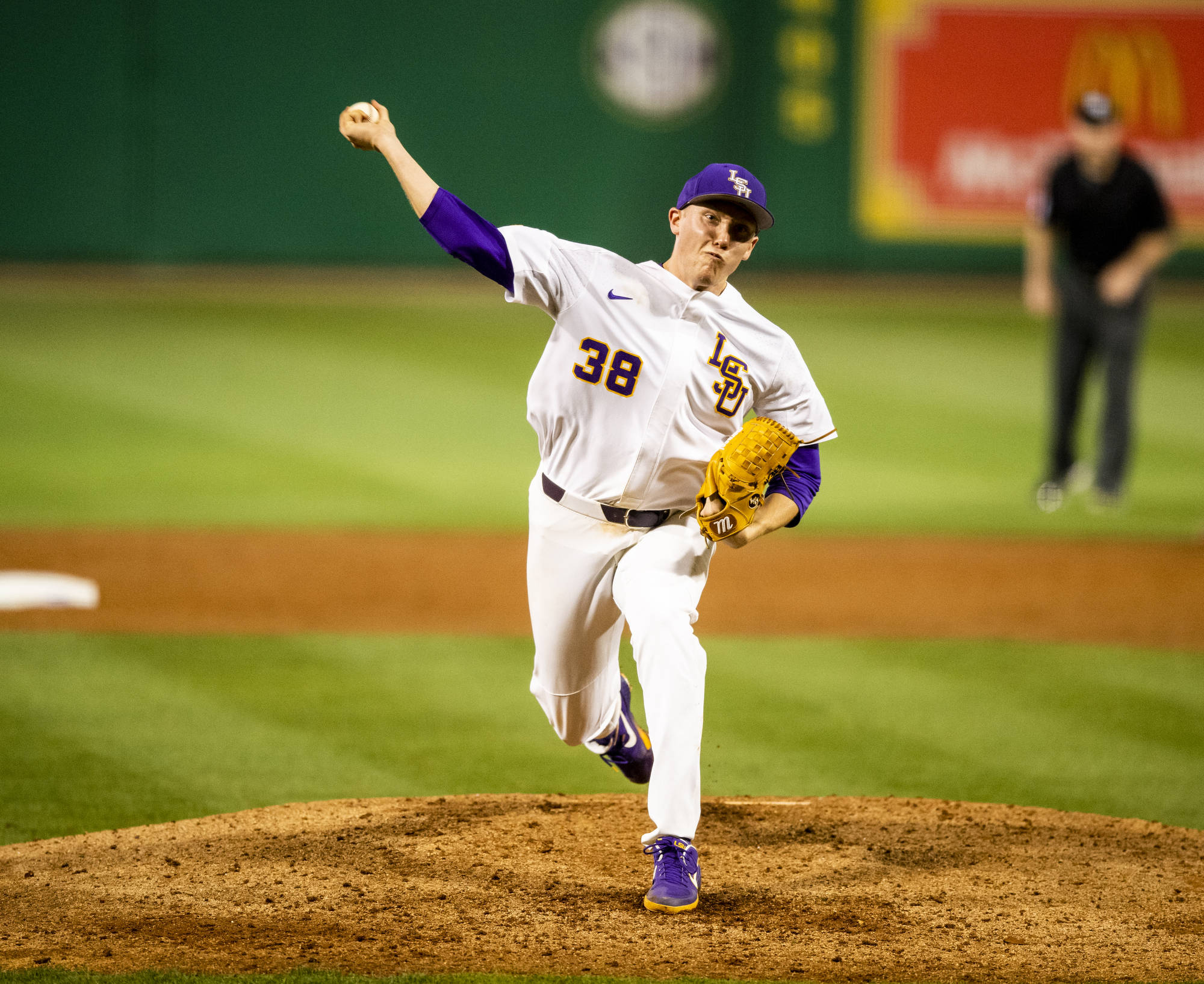 For 30 minutes, Paul Mainieri thought he had made the last big tweak to propel LSU into the final weeks of the season.

Then, he felt the familiar bite of the injury bug, and he did what he does best: adapted.

The short-lived alteration went as follows: Freshman ace Cole Henry would take over as LSU’s Friday night pitcher. Junior Zack Hess would move back to the bullpen, where he was a superstar in 2017 and shone on Sunday against Florida.

“We’re at that stretch run where we tweak little things,” Mainieri said Thursday, as the Tigers boarded the busses for a three-game series at Alabama. “I thought this was going to be the last big tweak

“I talked to Zack about it. He was all for it. He came out of the pen the other day and did a great job, and man, that would have certainly strengthened our pen.”

Two minutes after his conversation with Hess, Mainieri’s plans went to the wayside. Trainer Cory Couture –busier than ever this injury-riddled season – told the head coach his freshman star had elbow soreness.

Consider the tweak untweaked – for now, at least.

“A half-hour later,” Mainieri said, “I went to (Hess) and said, ‘Hey, remember all that stuff I just talked to you about a half-hour ago? Nevermind. We need you as a Friday night guy.’ Zack, in typical fashion, said, ‘Coach, I’m going to do whatever you need me to do to help this team.’”

That mentality will have to carry the Tigers through the weekend, as the soreness will keep Henry – who has won five of his six SEC starts and is in the midst of a debut season as good as any in the last decade in Baton Rouge – sidelined for this weekend.

.@LSUbaseball freshman pitchers who had WHIP <1.18 in at least 49.2 IP.
SEC POW @Cole__Henry12 certainly earning his place among the best under coach Mainieri. #LSU pic.twitter.com/3aTLnOZYQ4

That’s the bad news. The good news: the results of the MRI on Henry’s elbow came back “picture perfect,” and the head coach hopes a week of rest will mend that valuable right arm.

“It’s kind of disheartening,” Maineiri said. “Cole pitched so great last weekend. Just thought he was on the road to greatness…You can’t fight injuries. When they happen, you just have to deal with them and do the best you can.”

The weekend plan on the mound, then, will be Hess on Friday and sophomore Eric Walker on Saturday. Sunday is up for grabs, depending on who is available from the bullpen. The only pitcher who Mainieri said he wouldn’t throw Friday or Saturday was freshman Landon Marceaux, who started on Tuesday and went three shutout innings.

“Todd Peterson came to me and said, ‘Coach, with Henry hurt, give me the start on Sunday.’ I said, ‘You’re too valuable to our team coming out of the pen. If I take you out of the pen – especially with not moving Hess to the pen – it makes our pen too thin,” Mainieri said.  “If we need Peterson to win game one or game two, I’ve got to use him then.”

Hess spoke with the media before Mainieri revealed the nature of his role change, so he didn’t delve into the specifics of going from starter to reliever to starter in a half hour. But he did say he felt 100 percent after Sunday’s relief appearance, his first true outing in more than two weeks due to a strained groin. And he did talk about the need for everyone to step up in Henry’s absence.

“We’re going to have to figure it out this weekend,” Hess said. “With Cole being out, that just means the bullpen is going to have to step up. It’s something we’ve had to do almost every weekend this year, in some shape or form.”

Third baseman Chris Reid, who has not played since the first couple of innings in the series opener against Florida last week, practiced Thursday and is clear to play this weekend.

Outfielder Zach Watson was also set to practice, but he picked up an illness and missed the session. Mainieri said he will travel this weekend, though he’s unlikely to play Friday, as he will drive up separately from the team to keep the chances of contagion limited. He could appear in the lineup later in the weekend.

Offsetting that absence from the right side of the plate could be freshman infielder Gavin Dugas, who has reached base in six of eight at bats this season in his only three games played. Mainieri said he’s been hitting with “amazing authority” in batting practice and could DH, with Giovanni DiGiacomo filling in for Watson in the outfield.

Hal Hughes will also be available in a defensive role, Mainieri said, after the infielder hurt his thumb and his ribs in an in-game collision last weekend.

Mainieri could also call on freshman Drew Bianco, who broke out of a season-long slump over the past week. Starting in Reid’s place at third, Bianco is hitting .455 (5-for-11) in his last four games, including a 430-foot homer Tuesday against Lamar.

“It’s something that might help us down the stretch, once we get into postseason play, just getting those guys experience,” said Hess. “With Reid being out, I thought Bianco played really well for us. Gio’s played good outfield for us.

“Getting those guys experience, I think it’s going to make the moment less big when we get into postseason play and have to put some of those guys in there.”

Another promising development has been the defensive work displayed by sophomore Saul Garza at catcher.

Since healing up from an offseason procedure on his meniscus, Garza has provided a steady presence behind the plate. He’s thrown out two runners and been error-free in four games behind the plate, starting the last three there.

Mainieri said he would take the five-hour bus ride to Tuscaloosa to consider whether to start Garza or Brock Mathis behind the plate this weekend.

“Saul has distinguished himself with his catching, his receiving skills, blocking, and throwing,” Mainieri said. “Offensively, they’ve both done about the same, but I think Saul’s emerged a little bit with his defensive skills. I (just) don’t know that he’s got the endurance Brock Mathis has, where he can catch every game.”