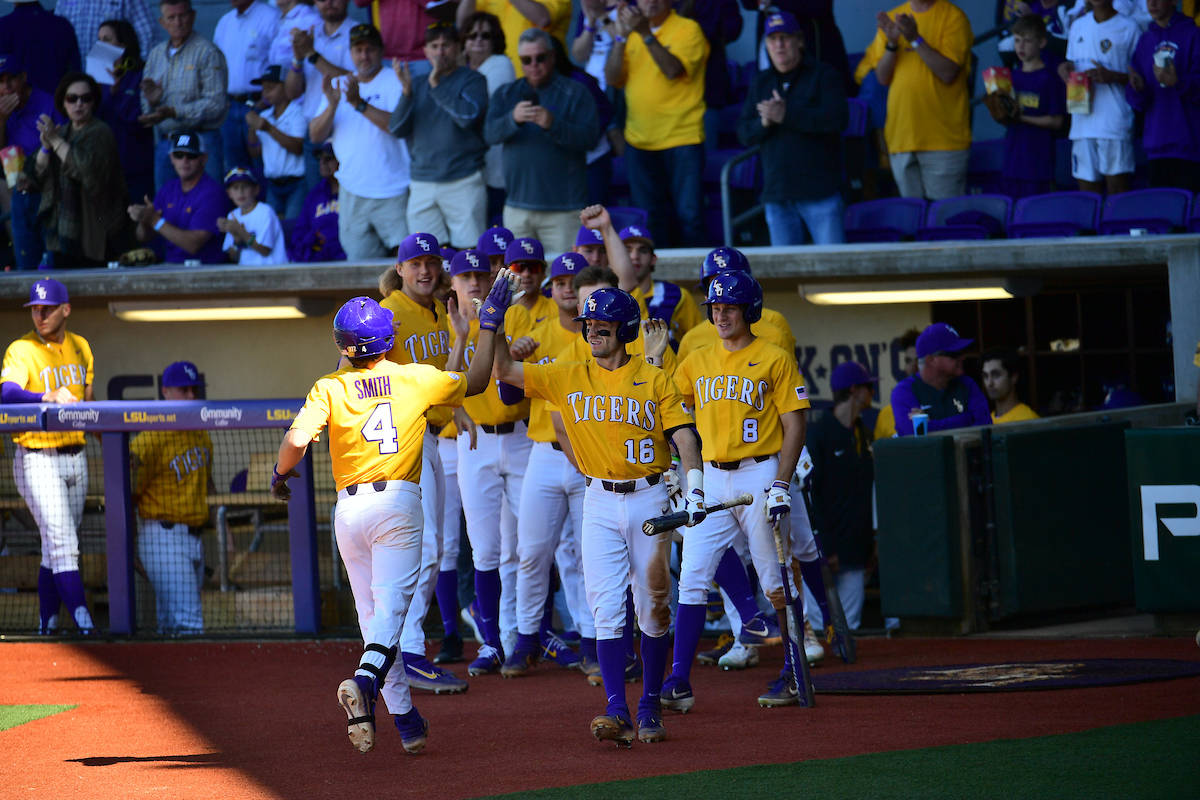 BATON ROUGE, La. – The No. 10 LSU baseball team scored nine runs in the first three innings to propel it to an 11-2 win over No. 25 Florida Saturday afternoon in Alex Box Stadium, Skip Bertman Field.

The Tigers return to “The Box” Tuesday night for a matchup with Lamar. First pitch is set for 6:30 p.m. CT. The game will be streamed through SEC Network+.

Fans can listen to Tuesday’s game on the LSU Sports Radio Network, including 98.1 FM in Baton Rouge. Live audio can be found online at LSUsports.net/live.

Junior Zack Hess came out of the bullpen to get the final out sixth inning. He tossed 2.1 innings, allowing two hits and notching three strikeouts.

Devin Fontenot pitched the ninth inning and recorded a strikeout to end the game.

LSU collected 11 hits in the contest, as rightfielder Antoine Duplantis was 3-for-5 with four RBI, and shortstop Josh Smith belted two doubles and a solo homer.

Florida had opened the SEC series with a 16-9 win over LSU on Thursday night, but the Tigers came roaring back with a 13-1 victory Friday night before clinching the three-game set with Saturday’s triumph.

“I’m just real proud of our guys,” said LSU coach Paul Mainieri. “They rebounded with two tremendous wins after a tough loss on Thursday night. We won series the hard way – we lost the first game on Thursday, but we came back to play exceptionally well in all phases of the game over the next two days.

“Eric Walker was just great today. He was really outstanding, and he probably could have gone another inning, but we wanted to give Hess and Fontenot some work. Eric’s stuff was back up to its normal velocity, his command was really good, and we played good defense behind him.”

Smith doubled to right to leadoff the LSU first inning. With Tigers on first and second, Duplantis lined a single through the right side that scored Smith. First baseman Cade Beloso reached on a fielder’s choice that allowed second baseman Brandt Broussard to score, and designated hitter CJ Willis followed with a one-out double to right center that scored Duplantis and gave LSU a 3-0 lead.

Third baseman Drew Bianco singled through the left side to start the second inning. Smith then doubled to right and Bianco scored. Broussard reached after being hit by a pitch, then Smith and Broussard completed the double steal to put Tigers on second and third with no outs. Duplantis singled to right to score Smith before Cabrera grounded into a double play, but Broussard was able to score to give the Tigers a 6-0 lead.

Bianco was hit by a pitch with two outs in the third. Smith was also hit by a pitch and Broussard followed with a walk to load the bases. Duplantis reached first after he beat the throw on an infield single and two runs scored. Cabrera followed with another single that scored Broussard. For the third straight inning, the Tigers put up a three-spot to take a 9-0 lead.

Left fielder Austin Langworthy doubled to left-center to start the top of the fourth for Florida. With two outs in the inning, third baseman Cory Acton hit a two-run homer over the right field wall to cut the LSU lead to 9-2.

In the fifth, Smith launched a leadoff solo shot – his sixth homer of the season — over the right field wall to give the Tigers a 10-2 lead.

Center fielder Giovanni DiGiacomo drew a one-out walk in the sixth. He then moved to second and third on two passed balls. Bianco fouled out to right for the second out, and DiGiacomo came home, extended the advantage to 11-2.