Henry Shines as No. 10 Baseball Evens Series with UF 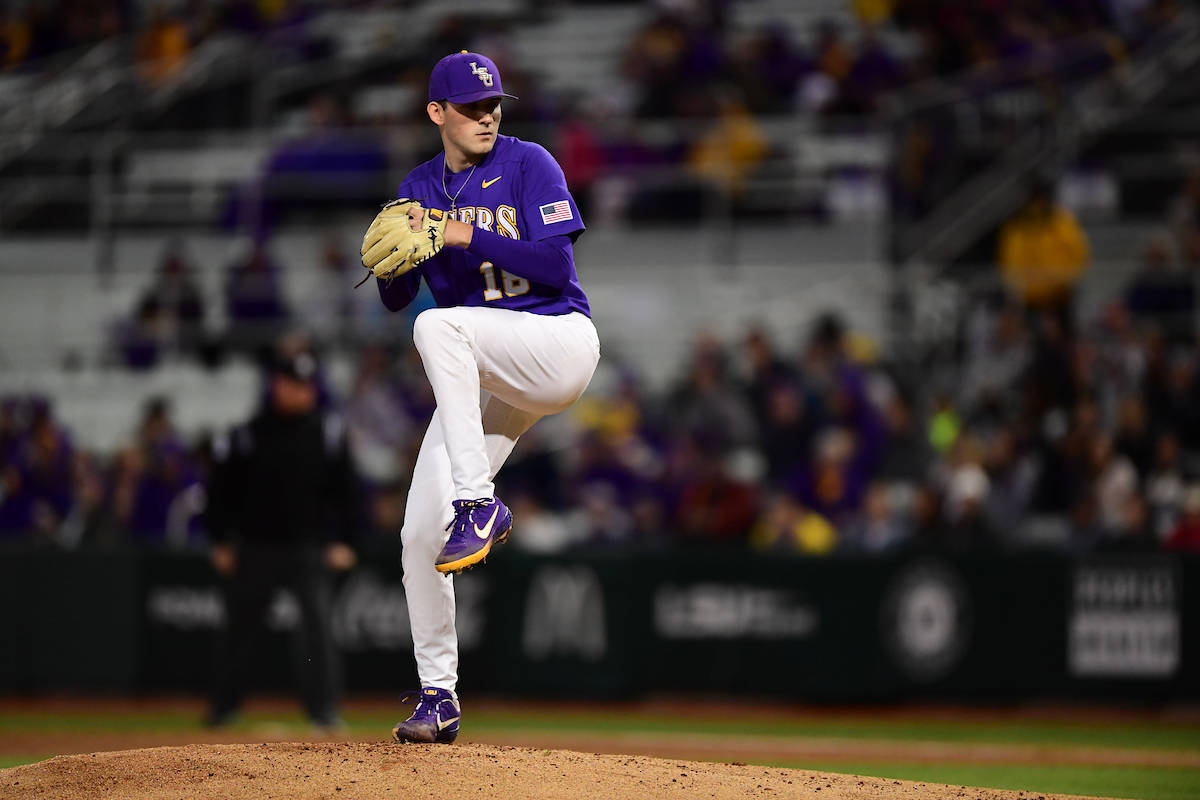 BATON ROUGE, La. – Freshman right-hander Cole Henry struck out a career-high12 batters to propel the No. 10 LSU baseball team to a 13-1 win over No. 25 Florida to even the series Friday night in Alex Box Stadium, Skip Bertman Field.

Henry improved to 4-2 on the year and limited the Gators to one run on four hits and did not walk a batter in 103 pitches.

“Isn’t baseball amazing?” said LSU head coach Paul Mainieri. “We got thumped last night, but our kids never gave up and they carried the momentum generated near the end of last night’s game into the game tonight. Although we lost last night, our hitters gained confidence that they could hit Florida’s pitching, and tonight we had a tremendous pitching performance from Cole Henry, 12 strikeouts, no walks, just phenomenal.

“It was a good victory for us, and it’s a lesson I’ve been trying to emphasize to our players. One game doesn’t carry over into the others, they’re all separate entities. Our fantastic effort tonight really has no bearing on tomorrow’s game at all. It should be a great ball game tomorrow to see if we can win this series.”

The Tigers were led at the plate by left fielder Daniel Cabrera, who was 2-for-5 on the night with four RBI, a home run, a double and a run scored.

Todd Peterson fired the final 3.2 innings and blanked the Gators, limiting Florida to two hits and striking out one.

Right-hander Christian Scott suffered the loss and dropped to 3-3 on the year after allowing five runs on six hits, walked three and struck out one in 3.2 innings.

First baseman Cade Beloso led off the bottom of the second with a double to center field. With runners in scoring position, after a walk and a ground ball to the pitcher, catcher Saul Garza grounded out to shortstop, which allowed Beloso to score and gave LSU the 1-0 lead.

The Tigers tacked on a run in the third to make it a 2-0 game when left fielder Daniel Cabrera doubled down the right field line to bring in shortstop Josh Smith, who was hit by a pitch to start the bottom half of the frame.

With two outs in the top of the fourth inning, third baseman Cory Acton hit a solo home run to right field to put Florida within one, 2-1.

LSU responded with three runs with two outs in the bottom of the fourth to extend the lead to 5-1. Down 0-2, third baseman Drew Bianco ripped a double down the left field line. After Florida intentionally walked shortstop Josh Smith, second baseman Brandt Broussard smoked a single through the left side to bring in Bianco.

A double steal put Broussard on second and moved Smith to third, who touched home on a throwing error by the catcher. Broussard scored from second on an RBI single up the middle by right fielder Antoine Duplantis to round out the frame.

Beloso got the bottom of the fifth started with his sixth home run of the year, a solo blast to right field. With the bases loaded after base hits by designated hitter CJ Willis and right fielder Giovanni DiGiacomo and a walk by Garza, Bianco was hit by a pitch, which allowed Willis to score.

Smith followed with a RBI single to right, and Broussard hit a sac fly to right field, which allowed Garza to tag up and score. Bianco came in to score on a ground ball to second by Duplanits for the Tigers’ fifth run of the inning to put LSU up 10-1.

After back-to-back errors by the Florida second baseman, Cabrera blasted his seventh home run of the year over the right field wall to extend the LSU lead to 13-1.