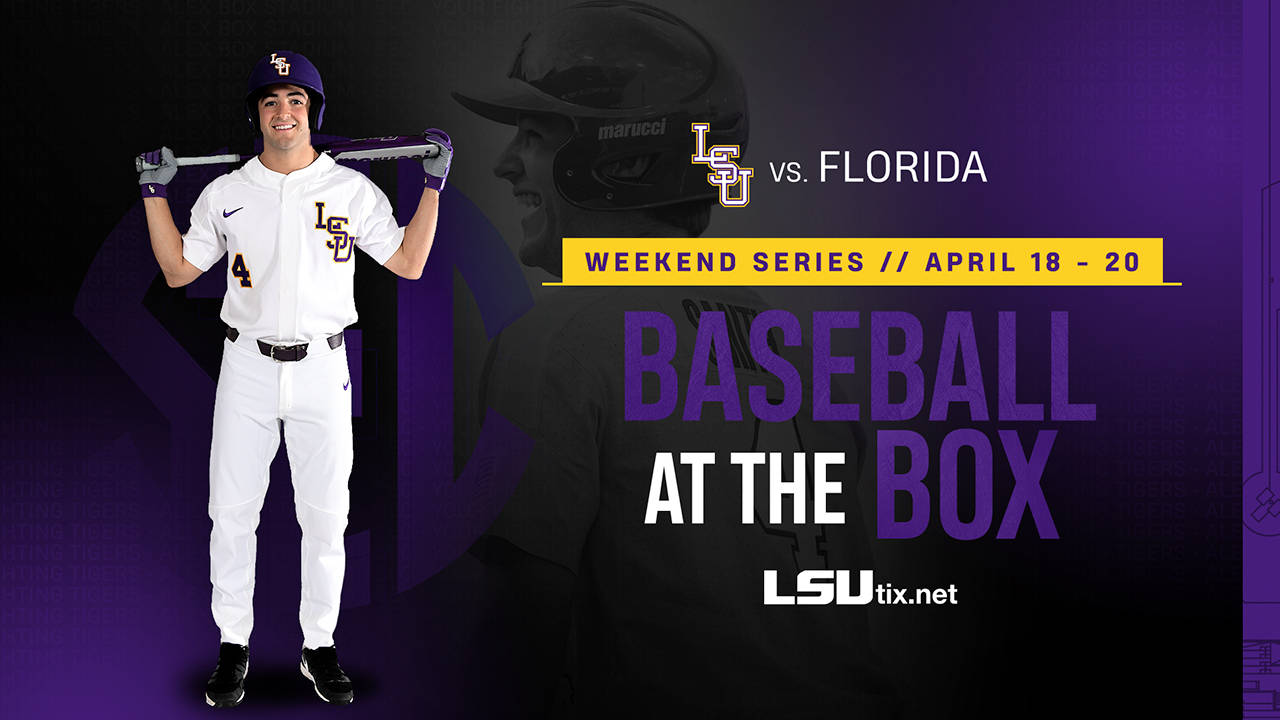 ONLINE
All three games will be streamed on SEC Network +

SERIES RECORD
LSU leads the overall series with Florida, 62-50-1, but the Gators have won seven of the last 10 meetings between the teams, dating back to 2016. Last season, Florida defeated LSU, 4-3, on Day 2 of the SEC Tournament before LSU rebounded to eliminate the Gators from the tournament two days later, 11-0 in seven innings. This weekend’s series marks the first LSU-Florida SEC regular-season matchup since March 24-26, 2017, when the Gators won two of three over the Tigers in Gainesville, Fla. LSU and Florida met in the 2017 College World Series Finals in which UF posted two straight wins over LSU to claim the national championship.

QUOTING PAUL MAINIERI
“We’ve played a lot of very big games against Florida over the years, and this series falls into that category. It’s the start of the second half of SEC play, and we traditionally have played our best baseball at this time of the year. We’re only a game out of first place in the overall league race, so each of these remaining 15 conference games take on a great deal of significance. Florida is an extremely talented team that has won four of its last five games and is playing with a lot of confidence, so we know we’re facing a tremendous challenge starting on Thursday.”

ABOUT THE TIGERS
• LSU is 9-6 in the Southeastern Conference, and the Tigers are just one game behind first-place Georgia and Mississippi State in the overall league standings
• The Tigers have 11 come-from-behind wins this season … the largest deficit the Tigers have overcome to win is three runs at Missouri on April 12 and versus California on March 9
• Senior rightfielder Antoine Duplantis has 312 career hits at LSU and has a chance to become the all-time hits leader in LSU history; former LSU first baseman Eddy Furniss is the all-time LSU and SEC hits leader with 352 from 1995-98 … Duplantis is No. 4 on the LSU career hits list, and he is just the sixth LSU player to collect 300 career hits … during this past weekend’s series at Missouri, he surpassed former LSU All-American Todd Walker (1992-94) for fourth place on the all-time LSU hits chart … Duplantis also collected his 15th career triple in the Missouri series, tying Walker for No. 1 on the all-time LSU triples list
• Senior second baseman Brandt Broussard led LSU at the plate in the Missouri series, batting .385 (5-for-13) with two doubles and four RBI … in LSU’s 12-11 win over Mizzou last Friday night, Broussard was 2-for-5 with a double and three RBI to lead LSU’s 13-hit output
• Junior centerfielder Zach Watson and senior third baseman Chris Reid may return to action on Thursday versus Florida … Watson suffered a groin injury in the eighth inning at Missouri Friday night and did not play for the remainder of the series, and he missed Tuesday’s game versus UL Lafayette … Reid strained a hamstring early in Saturday’s game at Missouri, causing him to leave the contest after the third inning, and he has not played since that time
• Junior right-handed pitcher Zack Hess also has a chance to pitch this weekend versus Florida, though his role has yet to be determined … Hess suffered a pulled groin muscle in the first inning last Friday at Missouri and had to leave the contest
• Junior right-hander Todd Peterson was brilliant in relief on Friday night at Missouri to earn his third win of the season … Peterson entered the game at the start of the seventh inning with the score tied 11-11 and worked three perfect innings with five strikeouts … LSU scored the eventual winning run in the top of the 10th inning to give Peterson the victory