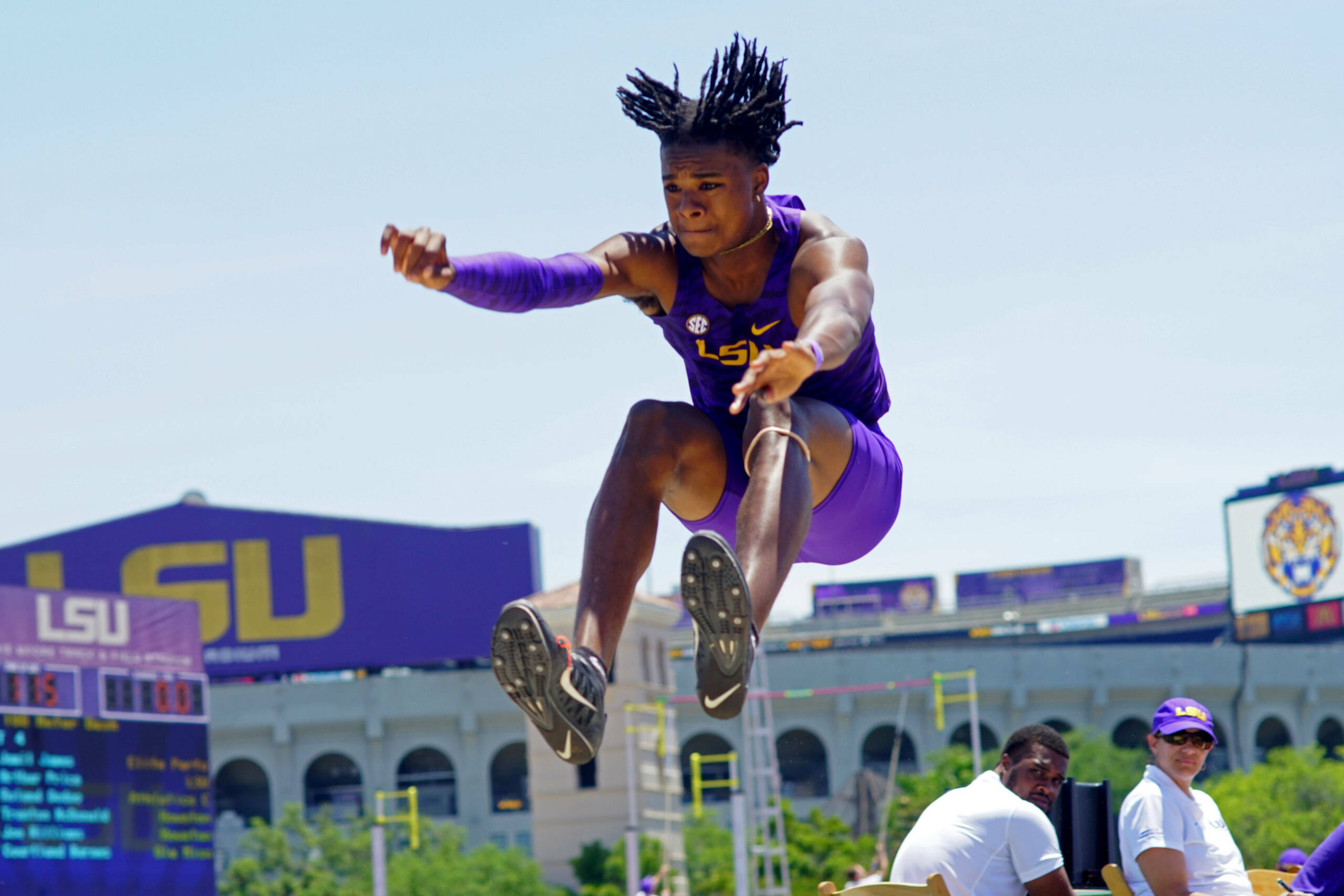 JuVaughn Harrison, who competed in the long jump for the first time outdoors, went big with his final jump of the competition. Having already wrapped up the title, the sophomore from Huntsville, Ala., leapt out to a career-best mark of 26′ 9.75” (8.17 meters) on his final attempt to put the finishing touches on an excellent set of jumps. The 26′ 9.75” bound is an NCAA lead, ranks No. 3 in the world for 2019 and is the fourth-best jump in LSU history. All three of his jumps that registered a mark were over 26 feet in the competition as he also added jumps of 26′ 1.50” and 26′ 2.25”.

😱 a BIG season opener from @jaay_jumps

The men’s 4×400 meter relay closed out the meet with a bang by clocking a NCAA leading 3:02.88. Dorian Camel started the relay off with a split of 46.3 before giving way to Raymond Kibet (45.6 split). Correion Mosby replicated Kibet’s split of 45.6 and then Tyler Terry brought the win home with a closing time of 45.2. LSU becomes the first collegiate team this year to go sub 3:03 outdoors. The 3:02.88 ranks third in the world for 2018 and is a meet record.

LSU got the day started by taking the top collegiate spots in the 4×100 meter relays. The foursome of Tonea Marshall, Ariyonna Augustine, Rachel Misher, and Sha’Carri Richardson clocked a season best of 43.47 to zoom away from the field on their way to registering the NCAA’s third-fastest time of the season. On the men’s side, Damion Thomas, Akanni Hislop, Correion Mosby, and Jaron Flournoy took second overall, and first collegiately with a time of 39.40.

Richardson, Marshall, Flournoy, Thomas and Hislop would all go on to win individual titles as well. Marshall led a 1-2-3 finish by LSU’s women’s hurdlers. Marshall clocked a winning time of 13.19 and she was followed by Brittley Humphrey (13.22/second place) and Milan Young (13.30/third place). In the men’s 110 meter hurdles, Thomas clocked a season best 13.60 to place first collegiately and second overall behind 2016 Rio Olympic champion Omar McLeod (13.29).

Flournoy ran his first individual race of the 2019 season in the 100 meters and he did not disappoint. The senior from Detroit, Mich., clocked an opening 10.14 (+2.3) to claim the overall title with the fifth-fastest readout to date in the NCAA. Mosby also ran in his heat and registered a time of 10.43, which was good enough for eighth overall and second collegiately.

In the 200 meters, Richardson and Hislop came away victorious. Richardson ran the first 200 meter dash of her outdoor collegiate career and clocked a time of 22.99 to beat out 68 other competitors. The 22.99 ranks sixth on the national level and is the fastest by a freshman. About 45 minutes before they helped set a NCAA leading 3:02.88 in the 4×4, Hislop and Camel ran to a 1-2 collegiate finish in the 200 meters. They both won their heat and Hislop clocked a time of 20.75 to finish second overall, and Camel came in at 20.96 to place sixth overall.

The women’s distance crew picked up a couple of wins in the 800 and 1,500 meter races. Ersula Farrow led a charge of three women that finished in the top four spots with a season best time of 2:04.95 to win and rank 11th in the NCAA. Katy-Ann McDonald took third with a time of 2:07.97, while Hollie Parker finished fourth with a readout of 2:09.00. For Parker, the 800 meter run was her second race of the day. She was victorious in the 1,500 meter run with a clocking of 4:25.45; Hannah Bourque checked in right behind her with a career best of 4:36.44 for second place.

Mercy Abire (triple jump), Christian Boyd (400 meter hurdles) and RC Walbrook were the final three collegiate champions of the day. Abire registered a mark of 42′ ½” and Boyd circled the track with hurdles in 51.86 seconds for his win. Walbrook completed the first decathlon of his career with a collegiate winning score of 6,183 points. His detailed event-by-event scoring can be found at deltatiming.com.