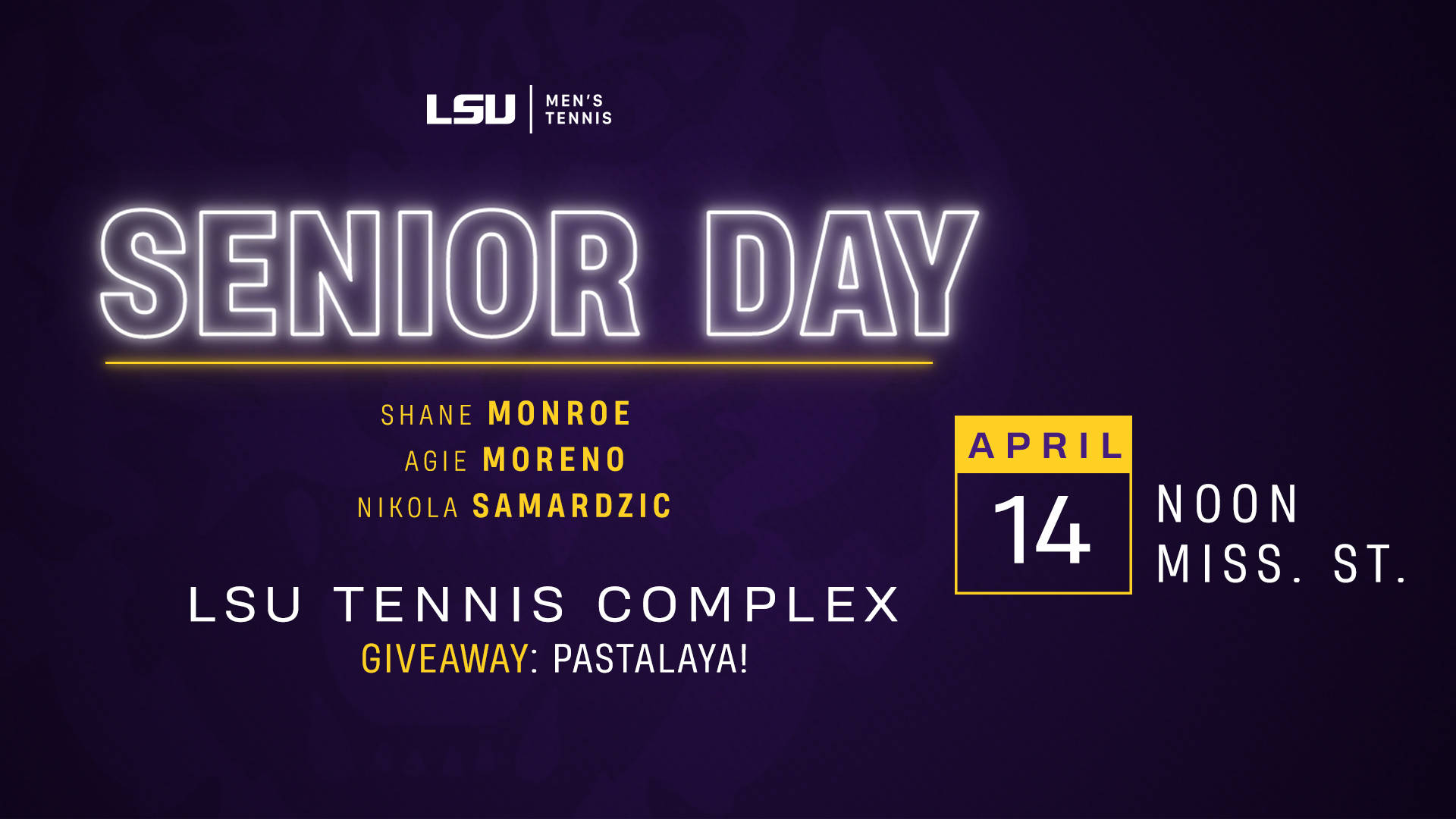 BATON ROUGE – The LSU men’s tennis team will wrap up the regular season with a match against No. 7 Mississippi State Sunday at noon CT in the LSU Tennis Complex.

In between the doubles point and singles play, the Tigers will honor three members of the team for a senior tribute: Shane Monroe, Agie Moreno and Nikola Samardzic.

Admission to all matches in the LSU Tennis Complex is free. Pastalaya will be served for fans attending the match. Fans can follow the match at www.LSUstats.com and on Twitter @LSUtennis. The match also can be streamed online at LSUsports.net/tennisvideo.

Thoughts from Co-Head Coach Chris Brandi
“Tomorrow is the last regular season match of the year and Senior Day. All three guys who will be honored have done a great job this year in different ways. It’s been a tough few years for them and the program, but they will be moving on having a positive impact on where this program wants to go. Mississippi State is one of the best teams in the country. They might play the best doubles point of any team. They are strong 1-6 in singles, and we will have our hands full.”

Tiger Tidbits
The Tigers are 16-9 on the year and 3-8 in conference action with wins against Auburn, Arkansas and Kentucky.

LSU fell in a heartbreaker to Ole Miss Friday afternoon, 4-3. Rafael Wagner and Joey Thomas won their doubles match on court two, and the Tigers secured the Doubles point when Monroe and Daniel Moreno earned a win on court one.

Freshman Boris Kozlov earned his 20th win on the season with a win on court three in singles, and Daniel Moreno swept his opponent in back-to-back 6-4 sets on court six.

In the latest ITA poll, the Tigers are No. 36 as a team, and freshman Kozlov has remained in the singles rankings at No. 107. Doubles pair Wagner and Thomas checked in at No. 42 in doubles.

Kozlov leads the field with a 16-3 record in the dual season. Eleven of those wins have come from court four, and he has a perfect 5-0 record on court three along with a win against a ranked opponent.

Thomas and Wagner have recorded 13 wins in the dual season and have split time between courts one and two with eight wins coming from the top court and five on court two.

Notes on the Bulldogs
Mississippi State is 18-3 on the year and 10-1 in conference play. The Bulldogs are on an eight-match win streak and are coming off of a dominating 6-1 win at No. 8 Texas A&M.

Nuno Borges is the No. 2 player in the country, and Giovanni Oradini is No. 70. The Bulldogs also have two doubles pairs ranked. Borges and Strahinja Rakic are No. 3, and Niclas Braunand Oradini are No.15.