No. 4 Beach Continues to Dominate at Home 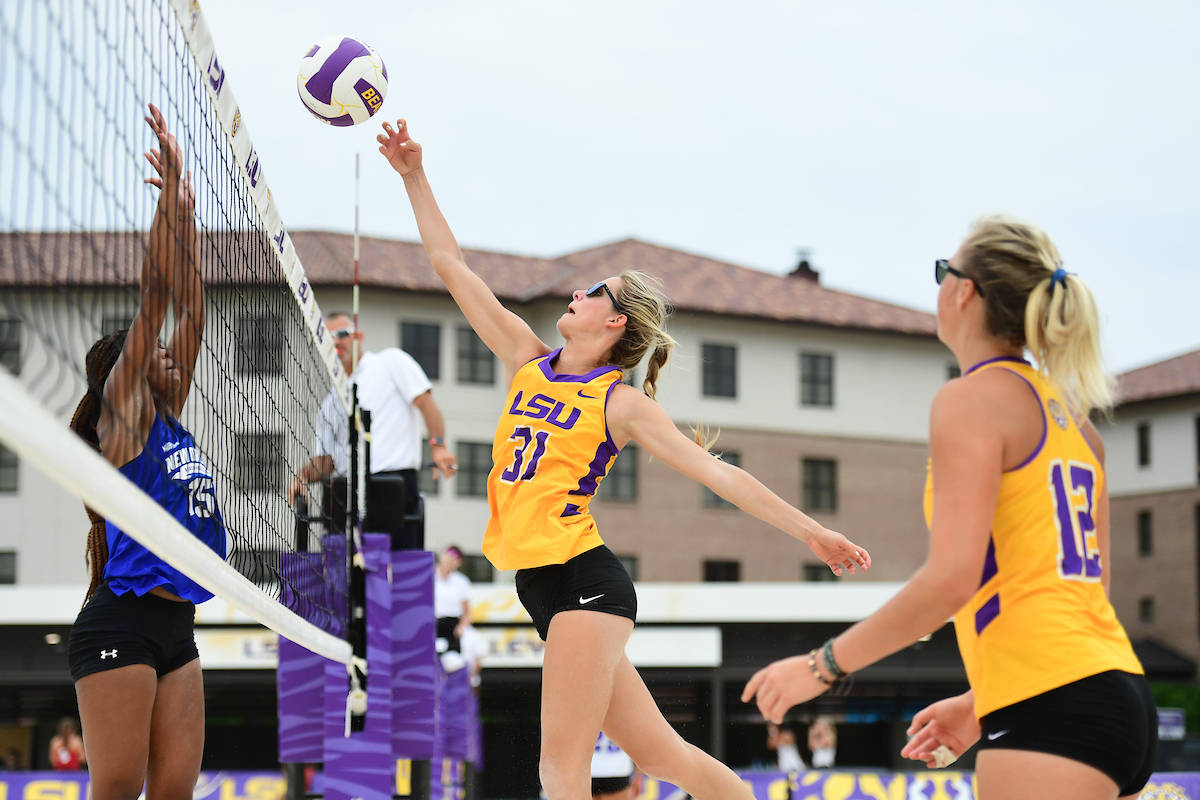 BATON ROUGE – The No. 4 LSU Beach Volleyball team improved to 9-0 at home this season on Friday during the Battle on the Bayou, sweeping both Nicholls State and New Orleans.

The Tigers have won all 11 of their home matches by a score of either 5-0 or 4-1, dominating their opponents in the inaugural season of LSU Beach Volleyball Stadium. The Tigers are 23-5 overall on the year.

“We very rarely lost at Mango’s and we haven’t lost here yet,” said head coach Russell Brock. “That’s always our mentality. We want to play well at home and our fans help us do that. This is just the next level of that reality.”

The Tigers did not drop a single set on Friday, defeating both Nicholls State and UNO, 5-0.

“We started out the day talking about going out and playing with joy and wonder,” said Brock “We were successful in that effort today and it showed”

To begin the day LSU face Nicholls State, a team in its first season as a program. Senior Olivia Beyer and sophomore Hunter Domanski got it going on Court 5 with pure domination, 21-3 and 21-9. Graduate transfer Taryn Kloth and senior Maddie Ligon continued the effort on Court 4, 21-15 and 21-11.

Senior Toni Rodrgiuez and freshman Ashlyn Rasnick-Pope finished the sweep for the Tigers on Court 3, 21-11 and 21-13.

On Court 4, Kloth paired up with senior Megan Davenport who was in search of her 70th career victory.

The senior, @MegDav__, gets her 70th career victory here on senior weekend! pic.twitter.com/BmaNxzPEBG

“I’ve got to hand it to my partners,” said Davenport, “because obviously I couldn’t do it without them. Kudos to all the girls I’ve played with at LSU Beach Volleyball. The list is pretty long. I’m so grateful that I got to be a part of so many different pairs.”

“She’s one of those kids that was born and raised to be a part of this program and she may not have even realized it,” added Brock.

Coppola and Nuss, LSU’s two winningest players in program history, would finish the Tigers’ second sweep of the day on Court 1, 21-12 and 21-12.

The Tigers will close out the regular season on Saturday against ULM at 10 a.m. and Spring Hill College at 12:30. The Tigers will then honor their eight seniors in a ceremony on the courts following the conclusion of the final match.

“At times we proved that we have more to give and that’s what our job is to do,” said Brock. “Tomorrow is another opportunity to do that.”