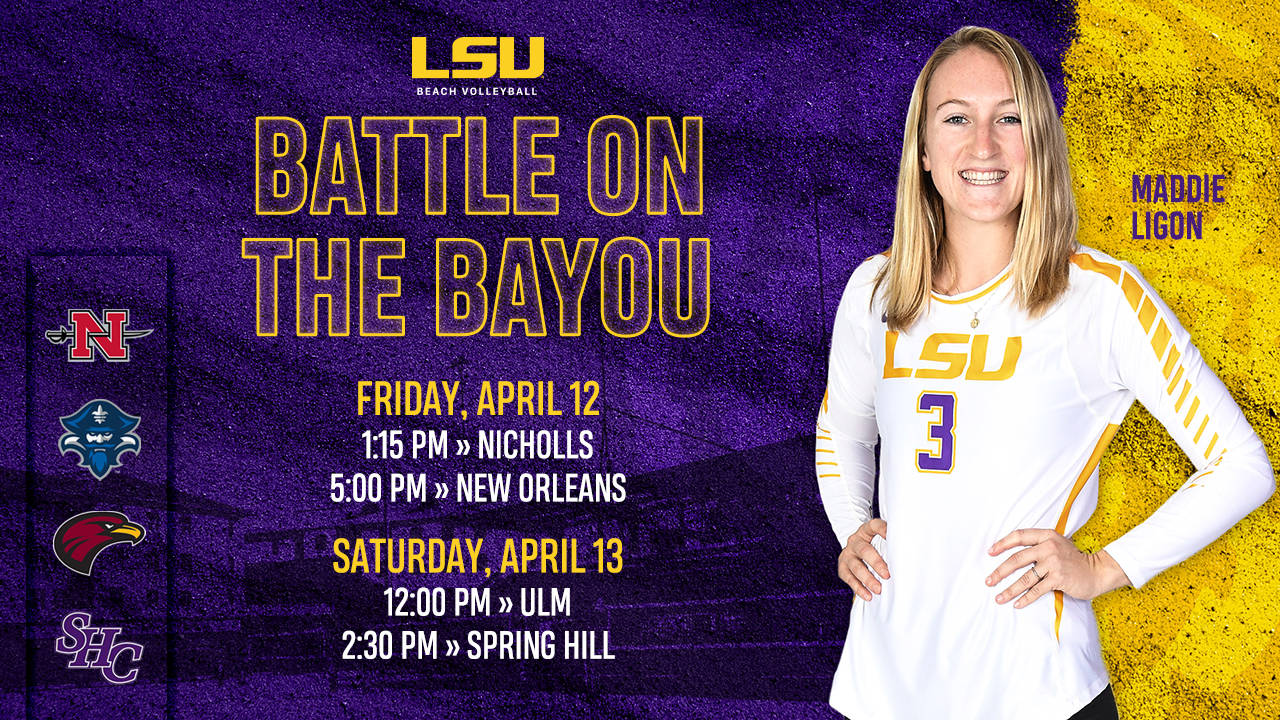 BATON ROUGE – The No. 4 LSU Beach Volleyball team will close out its regular season Friday and Saturday when it hosts the Battle on the Bayou. The Tigers will honor all eight of their seniors on Saturday after the matches.

LSU is 21-5 on the season and currently has a 9-0 record at home in the inaugural year of LSU Beach Volleyball Stadium. The Tiger are looking to once again lock down their sand this weekend to finish the first year in their new home undefeated.

“On the line is an undefeated initial campaign on our home courts,” said head coach Russell Brock.

LSU will welcome Nicholls State, New Orleans, ULM and Spring Hill College to campus this weekend for the final matches of the regular season. The Tigers will face Nicholls State at 1:15 p.m. CT and UNO at 5 p.m. on Friday and will close the weekend out on Saturday against ULM at noon and Spring Hill at 2:30.

“To be able to host those teams and give them a place to showcase what they’re doing in front of our fans and in our stadium is an honor,” said Brock.

Gates will open one hour prior the first match each day, 11 a.m. on Friday and 8:30 a.m. on Saturday. Fans are reminded that the Geaux Clear bag policy will be in effect for all matches. there will be a food truck along with refreshments, including adult beverages, throughout the weekend. Fans in attendance at 3:45 p.m. on Friday will receive free crawfish.

The ones pair on Friday of LSU vs. Nicholls State at 2:30 p.m., SHC vs. UNO at 3:45 p.m, Nicholls State vs. SHC at 5:00 p.m. and LSU vs. UNO at 6:15 p.m. will be featured on Cox Sports Television. Garrett Walvoord will be the play-by-play announcer and he will be joined by Andrew Beyer as the color analyst and Carley McCord court side.

“They believed in what we were selling before we had success, before we had a stadium and before we were in a position for anybody to know that this was a good place to go,” said Brock of the senior class. “They came purely on trust.”

Following the weekend, LSU will begin postseason play. The Tiger will compete at the CCSA Tournament next weekend and then will await selection Sunday on April 28 to see if they make it as one of the final eight teams to compete at the NCAA Championship in Gulf Shores.