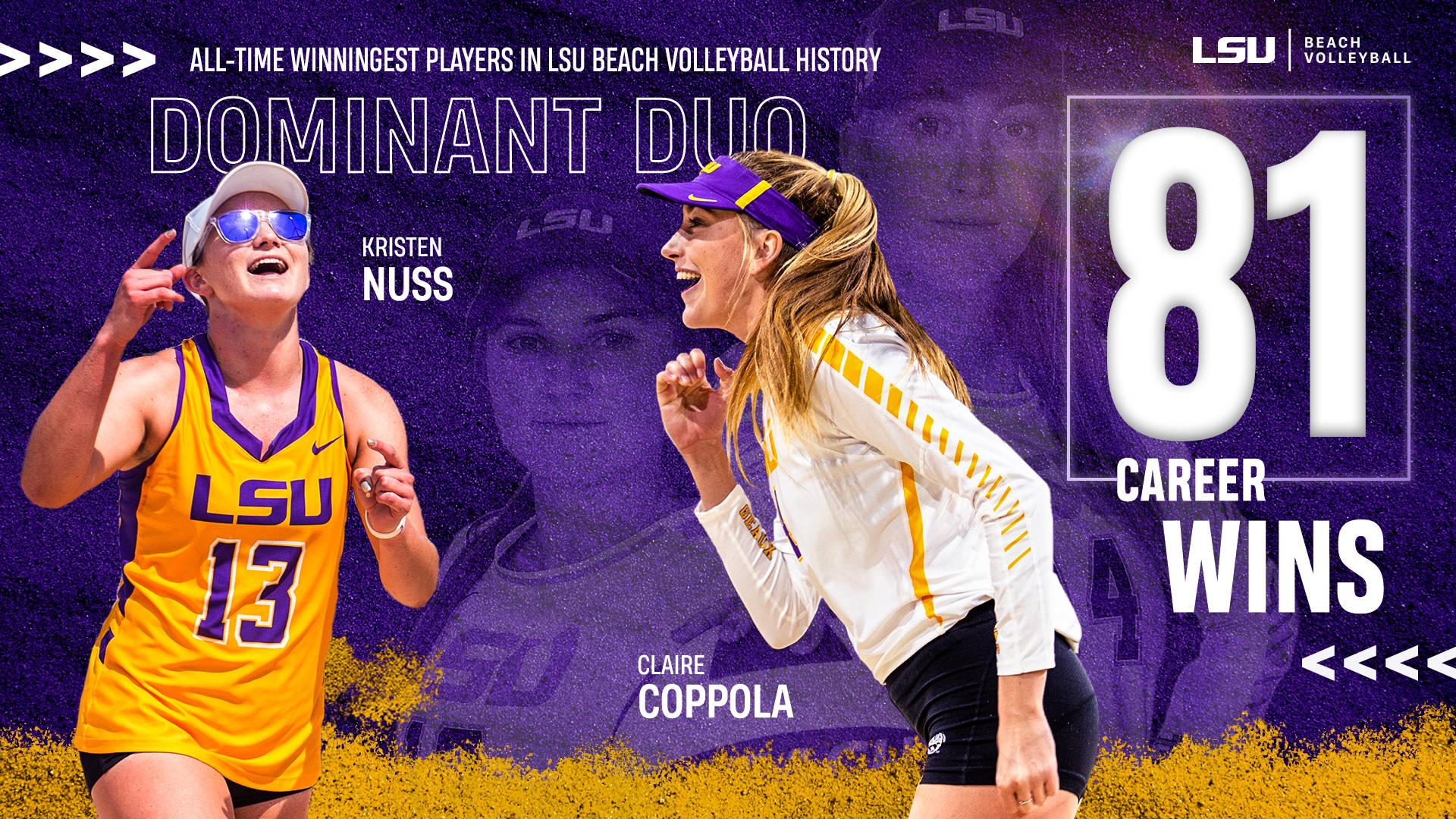 BATON ROUGE – Claire Coppola and Kristen Nuss led the Tigers to two victories on Sunday at the LSU Beach Invitational, as the LSU duo notched their 81st career victory to become the two winningest players in program history.

Coppola and Nuss, both just juniors, earned straight-set victories against No. 20 TCU and Houston Baptist to lead LSU to a 4-0 weekend. The LSU duo has competed together in every match together since they were freshmen. They past Katie Lindelow who competed for LSU from the start of the program in 2013-2017.

The LSU duo went 27-7 in their first year together before going 31-8 and earning CCSA Pair of the Year honors in their sophomore campaign. With their four wins this weekend, Coppola and Nuss sit at 23-3 on the season.

“We’re so honored and blessed to have this acknowledgment,” said Nuss.

“I couldn’t ask for a better partner and teammate to push me every day in practice,” added Coppola. “We just want to keep going from here and continue to do well.”

In the overall matches, LSU earned wins over No. 20 TCU and HBU to finish the weekend perfect after defeating Texas A&M – Kingsville and No. 11 South Carolina on Saturday. The Tigers now sit at 21-5 in 2019 and have come away with at least 20 victories in each of the past four seasons. LSU is a perfect 9-0 at home in the inaugural season of LSU Beach Volleyball Stadium.

“We’re proud to be undefeated in this space,” said Brock. “It’s a beautiful facility and we love having fans come and watch, but we’re also trying to protect this territory. To be able to come out with another four victories is always satisfying”

In the first match of the day LSU took down TCU. Graduate transfer Taryn Kloth and redshirt junior Maddie Ligon took Court 4 with ease, 21-16 and 21-17, as did senior Toni Rodriguez and freshman Ashlyn Rasnick-Pope, 21-17 and 21-19.

Coppola and Nuss would earn their 80th victory against TCU, 21-11 and 21-18, competing against a familiar face. Mandi Orellana was an integral part of the Tigers’ team from 2015-18. She is now a grad transfer at TCU where her sister is an assistant coach.

Sophomore Kahlee York and Kelli Agnew would drop LSU’s only court of the match on Court 2. Similarly to on Court 1, there was an recognizable foe across the net. Taylor Bradley played for two seasons at LSU before transferring to TCU. York and Agnew fell in the first set, 21-14, but battled to win the second set by the same score. In the third set, York and Agnew came up just short, 15-13.

Freshman Allison Coens and sophomore Hunter Domanski played in a battle on Court 5 in which they dropped the first set, 23-21, but returned the favor in set two, 25-23. In the deciding set, the LSU duo took it home, 15-8, to give the Tigers a 4-1 victory over TCU.

In the final match of the weekend against HBU, senior Olivia Beyer paired up with Rasnick-Pope on Court 4 for domination, 21-7 and 21-10.

Soon thereafter Coppola and Nuss got No. 81 and received a large ovation from the crowd of over 520.

Graduate transfer Taryn Kloth and Agnew would take Court 3 as well, 21-12 and 21-8, to clinch the match for LSU.

Coens and Ligon took the first set on Court 5 as did Rodriguez and senior Ashley Allmer on Court 2, but they both dropped the second set. In the final sets it was all LSU as the Tigers earned the sweep over HBU.

LSU will be back in action for the final weekend of the regular season next weekend for the Battle on the Bayou. The Tigers will face Nichols St. and New Orleans on Friday before concluding the regular season Sunday against ULM and Spring Hill

“We’re coming in this week to get better ,” said Brock, “and when Friday rolls around we’ll look to put that into action against some other teams.”