No. 4 Beach Takes Down No. 11 South Carolina 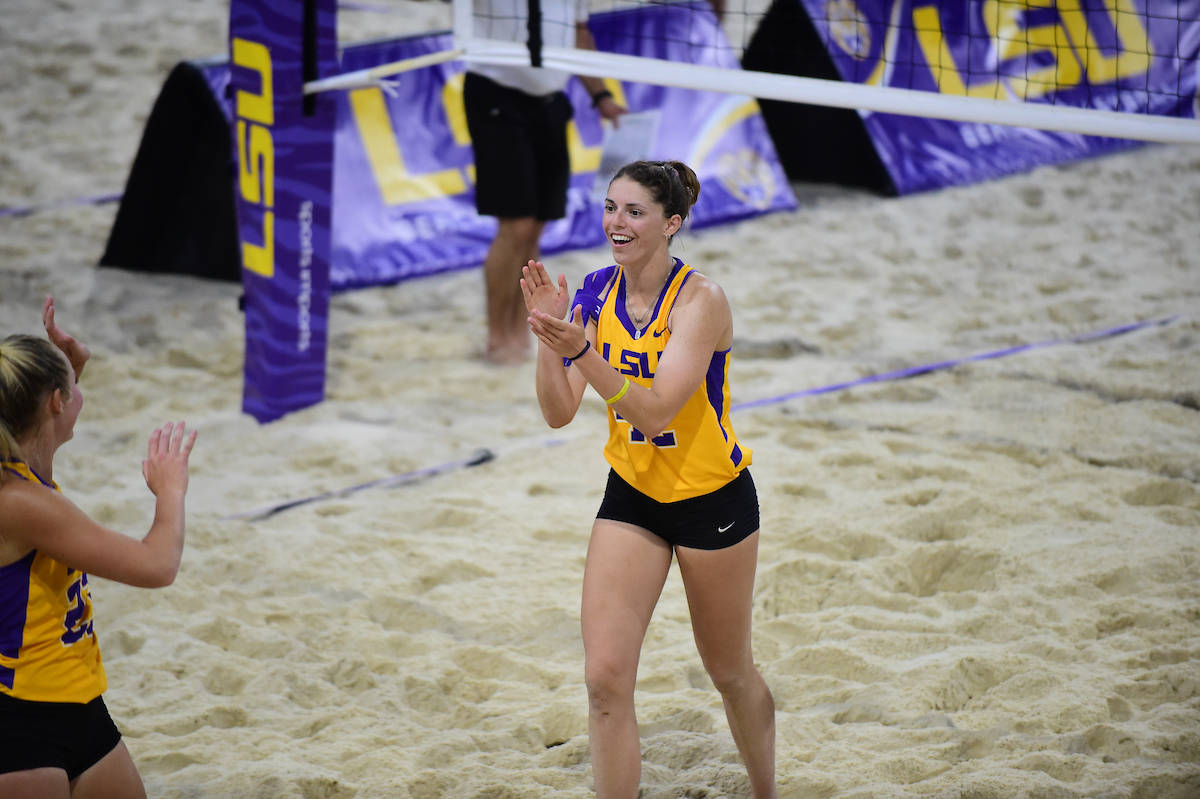 All six courts will be used at the same time.

BATON ROUGE – With two wins on Saturday, the No. 4 LSU Beach Volleyball team handled their business at day one of the LSU Invitational and advanced to 19-5 on the season.

With a heavy mix of LSU athletic events taking place on-campus, over 1,000 spectators made their way through the gates of LSU Beach Volleyball Stadium to witness to Tigers’ two victories.

“We knew with so many things going on on-campus that there would be people around that would hear the music and want to join us and clearly they did,” said head Coach Russell Brock whose team is 7-0 in its new stadium. “We couldn’t be more grateful and we hope it’s just the beginning.”

The junior pair of Claire Coppola and Kristen Nuss earned two more victories today, both in straight sets. The LSU duo now sits at 79 career victories as they both are just two wins away from becoming the two winningest players in program history. Coppola and Nuss will play two matches on Sunday.

The Tigers earned a 4-1 victory over Texas A&M-Kingsville in the morning to start the weekend off right. Heading into the later match against No. 11 South Carolina, the Tigers knew it would come down to how they executed on their side of the net.

“Through the course of the season we’ve had matches where we knew we needed to play well,” said Brock. “If we played as well as we could against South Carolina, we would get a big win that was going to really matter in the grand scheme of things.”

With their defeat over No. 11 South Carolina that required comebacks on three courts, the Tigers earned their 13th victory over a ranked team this season and clinched the regular season series over their conference foe after splitting their first two matches of the season with them. LSU now has the upper hand in all of its season series against eastern opponents except No. 3 Florida State, who the Tigers have split two matches against.

“To win the regular season series against South Carolina is huge,” said Brock. “They’re one of the better teams in the east. That was a big, huge win for us and one that was absolutely necessary from our perspective.”

The big match began with a Court 5 victory for freshman Allison Coens and sophomore Hunter Domanski who were 17-5 together entering Saturday and earned a win against TAMUK in the morning. Coens and Domanski struggled in the first set and fell, 21-13.

In the second set, the LSU duo came back with a vengeance and earned a 21-16 victory to force a third set. One they were there, there was no being denied.

“In the first set we had some mishaps here and there,” said Domanski, “but we talked about and we knew we were capable of beating them.”

On Court 4, the defending CCSA Pair of the Week of senior Olivia Beyer and redshirt junior Maddie Ligon were back in action after earnin a win against TAMUK. Like Coens and Domanski on 5, Beyer and Ligon dropped their first set, 21-19, but came back strong in set two, 21-17. The LSU duo would suffer their first loss together this season when they dropped the final set, 15-12.

With a win on both Court 1 and Court 5, the Tigers were setting themselves up nicely for a victory over South Carolina. Heading into Saturday, LSU was 15-1 on the season when earning wins on Courts 1 and 5. Coppola and Nuss have been a steady ones pair for the Tigers as have Coens and Domanski on Court 5, each pair playing every match together in their respective positions.

After freshman Kelli Agnew and sophomore Kahlee York dropped the first set on Court 2, 21-19, and senior Toni Rodriguez and freshman Ashlyn Rasnick-Pope did the same on Court 3, 24-22, the path to victory for LSU did not look great.

That’s when Rodriguez and Rasnick Pope went on a tear. Over the course of the entire second set and beginning of the third set, the LSU duo went on a 32-5 run, putting South Carolina away in dominating fashion, 21-4 and 15-5.