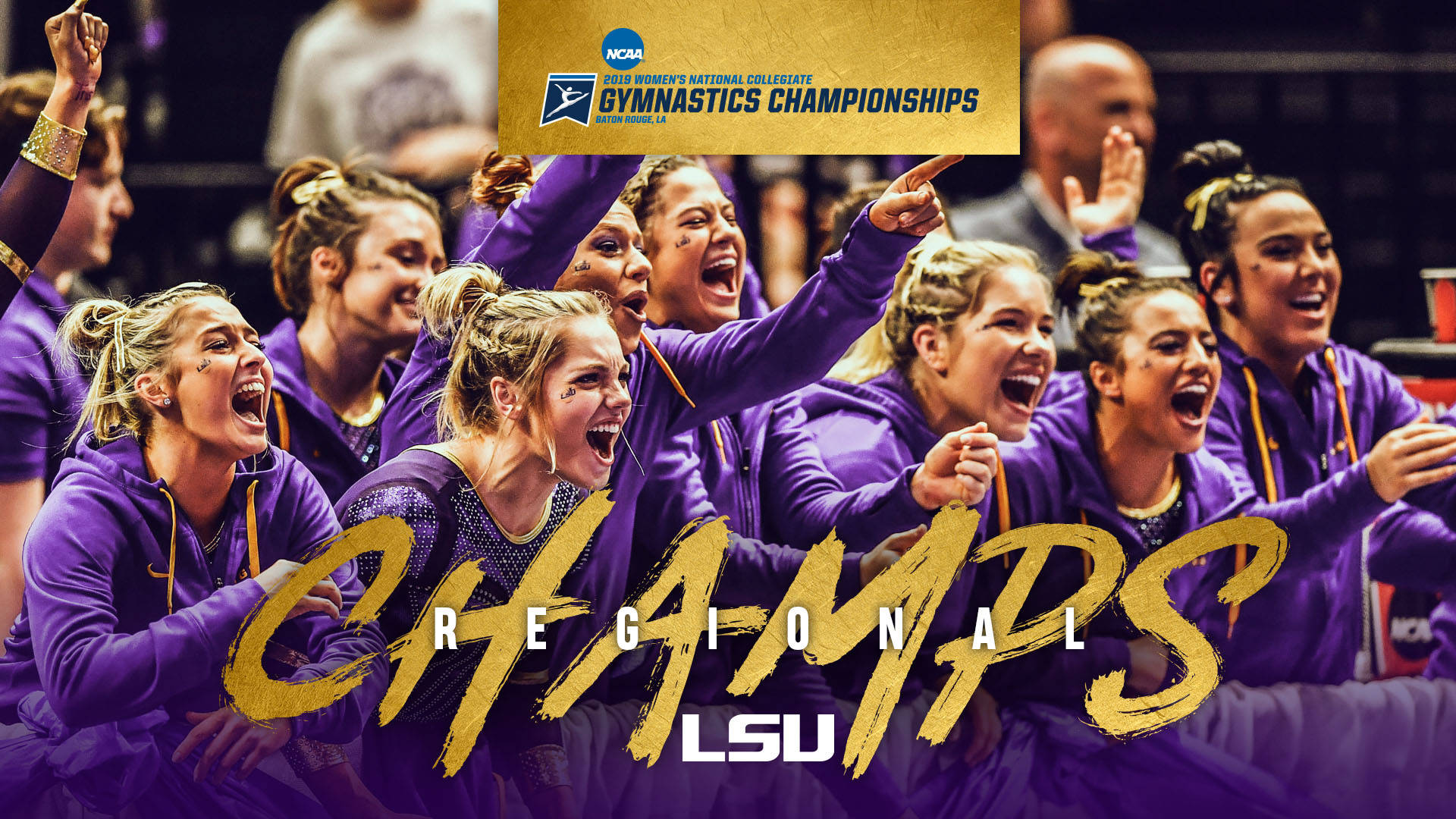 BATON ROUGE – For the 30th time in school history, LSU advanced to the NCAA Gymnastics Championships after winning the NCAA Baton Rouge Regional with a team score of 197.500 Saturday night inside the Maravich Center.

The Tigers won their 12th NCAA Regional in program history and the seventh in a row. The squad will compete at the NCAA Championships in Fort Worth, Texas, April 19-20. LSU improved to 24-3 overall after posting the fourth-highest team score at an NCAA Regional in school history.

“What an exciting and hard-fought night of competition,” LSU head coach D-D Breaux said. “This team did not give up and took every routine one at a time. We were dealt some real adversity this weekend and this team did not stop. I am proud of them and so happy to advance to NCAA Championships.

Utah finished second at the meet with a score of 197.250 to also advance to NCAA Championships. Minnesota and Auburn wrapped up the standings with scores of 196.900 and 195.725.

Seniors Sarah Finnegan, Lexie Priessman, McKenna Kelley and Julianna Cannamela competed for one final time in the Maravich Center with a crowd of 7,819 behind them for every routine.

Finnegan pushed her total individual tiles for a season to 45 to tie Sandra Smith and Susan Jackson for the school record. The Lee’s Summit, Missouri, native won the all-around with a 39.600 and also finished first on beam with a 9.95. She tied April Burkholder for the most beam title in season with her 10th win.

Beam Lineup Opens with 49.500
The Tigers opened the PMAC on fire with a 49.500 on beam for the second-highest total on the event at a regional in school history. Christina Desiderio opened the meet with a 9.875 and Bridget Dean followed with a 9.85. The final three performers were crucial with Kennedi Edney scoring a 9.90, Reagan Campbell scoring a 9.925 and Finnegan closing the event with a 9.95.

Kelley’s Routine Keeps Tigers in the Lead
The Tigers were consistent on floor to finish with a 49.350 on the event. Ruby Harrold opened with a 9.85, Reagan Campbell scored a 9.825 and Sarah Edwards earned a 9.85. Senior All-American anchored the squad with a 9.925.

Vault gets LSU to 148.20 Heading into Final Rotation
Mainstays in the lineup, Finnegan and Edney led the way yet again tying one another with 9.90’s on vault. Following them were a trio of Tigers as Harrold, Kelley and Edwards recorded 9.85’s to extend the team lead going to the uneven bars.

Finnegan Seals Victory for Tigers
In the final event of the night, Finnegan left no doubt in her final performance inside the PMAC with a resounding 9.95. The Tigers used scores of 9.875 from Edney, 9.85 from Sami Durante and 9.825 from Harrold to earn the win.

Next Up
LSU will begin its preparation for the NCAA National Semifinal I held in Fort Worth, Texas. The Tigers will compete against four other teams with the top two advancing to the National Championship meet. Semifinal I will begin at 1 p.m. Friday, April 19 and will be televised on ESPN2.