Beyer and Ligon Earn CCSA Pair of the Week 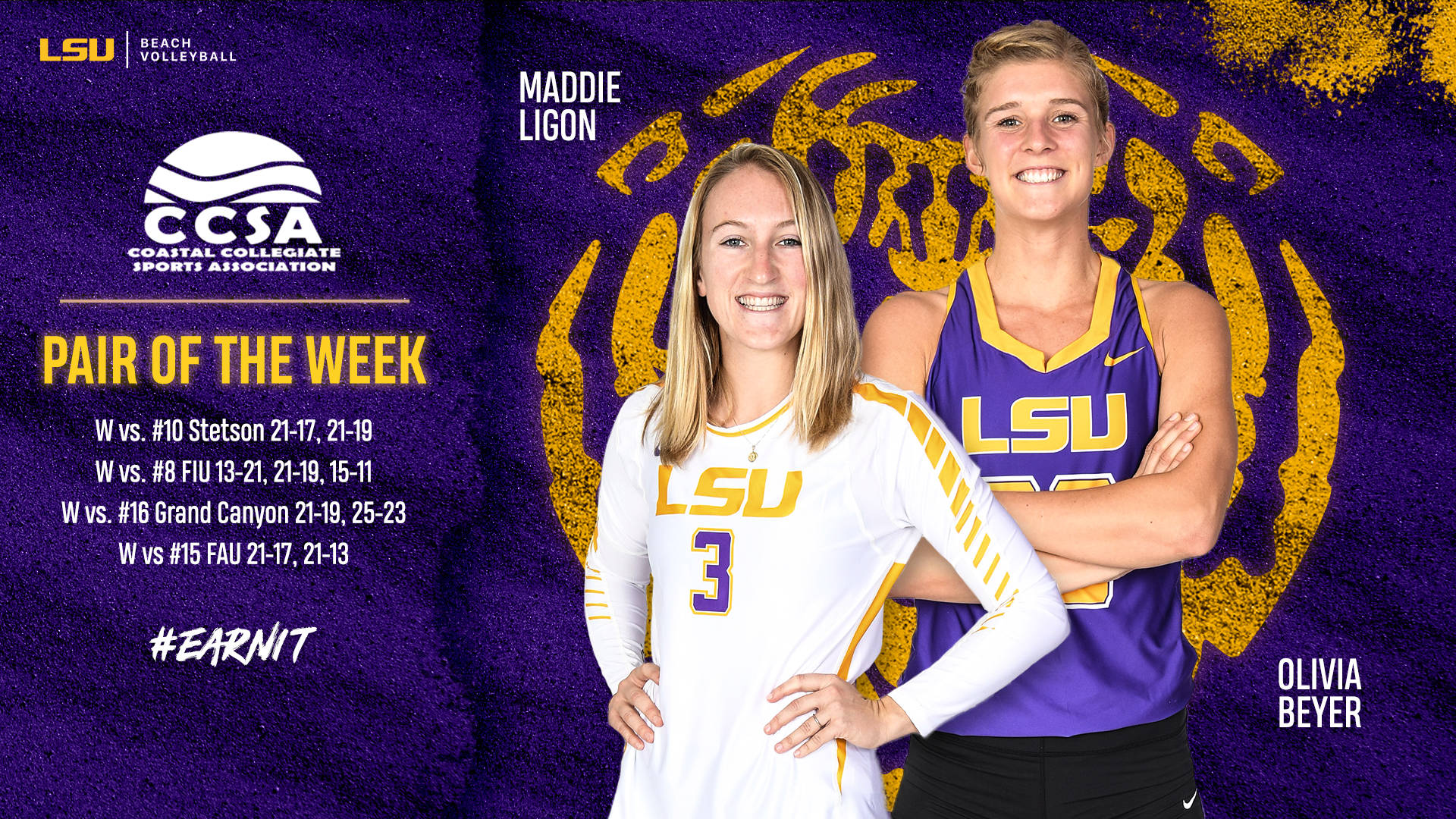 BATON ROUGE – Olivia Beyer and Maddie Ligon of the No. 4 LSU Beach Volleyball team (19-5) earned CCSA Pair of the Week, the conference announced Tuesday after the duo went 4-0 against pairs from Top-20 teams at the FIU Surf and Turf in Miami.

Joining up as a pair for the first time this season, Beyer and Ligon swept their competition on Court 4 over the weekend, defeating pairs from No. 10 Stetson, No. 8 FIU, No. 16 Grand Canyon and No. 15 FAU.

“I’m excited for Maddie and Olivia,” said head coach Russell Brock. “They really deserve this honor. I haven’t very often seen a pair come together and take advantage of an opportunity like they did this weekend.”

Heading into the weekend, Beyer and Ligon had not competed together.  Ligon, a redshirt junior, had compiled six victories on Court 4 while Beyer, a senior who is in her first year with the team after playing for the LSU indoor team for four years, had only competed in two matches on Court 3 and three matches on the extra court all season.

The pair came teamed up to help lead the Tigers to four consecutive wins over Top-20 teams in Miami. It started in a critical match against No. 10 Stetson on Friday. Beyer and Ligon defeated Julie Varga and Sam Harris in straight sets, 21-17 and 21-19.

“Playing in Miami Beach really gave them an opportunity to showcase their ability, and it came at a really important time,” added Brock. “To have them go undefeated for the weekend in so many big matches, it was really clutch.”

The Tigers were able to improve their Court 4 record to 14-8 on the season. On top of the four victories from Beyer and Ligon, Megan Davenport and Melia Lindner were able to get the win on Court 4 in the first match of the weekend against No. 1 UCLA, as the Tigers swept the competition there throughout the weekend.

It was a critical weekend for LSU in that it was the only time during the regular that the Tigers would face either Stetson or FIU. Getting victories over both of those teams means that LSU has secured at least one victory over every team from the east region that it has played this season thus far which could prove to be vital come Selection Sunday on April 28.

The Tigers will be at home for the next two weekends to finish off the regular season. LSU will face Texas A&M-Kingsville, No. 11 South Carolina, No. 20 TCU and Houston Baptist this weekend, April 6-7 at the LSU Beach Invitational.