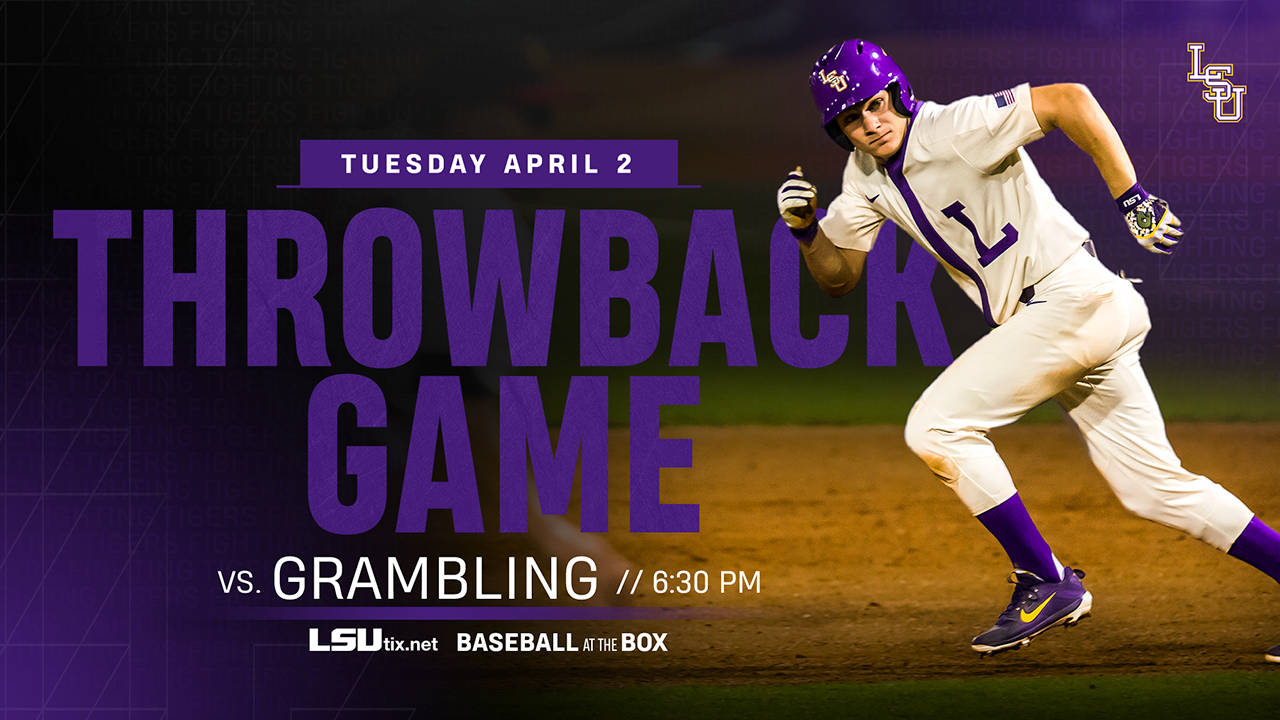 ONLINE
The game will be streamed on SEC Network +

SPECIAL EVENT
LSU will wear “throwback” uniforms in Tuesday’s game reminiscent of the style worn by the Tigers’ teams of the early 20th century. The uniforms feature a purple block “L” on the left chest of the cream-colored jerseys and a white block “L” on the front of the purple cap.

SERIES RECORD VS. GRAMBLING
LSU leads the all-time series with Grambling, 8-0, and the first meeting between the schools occurred in 2009. All eight of the prior meetings have been played in Baton Rouge. LSU defeated GSU,10-3, last season (February 27) in Alex Box Stadium, Skip Bertman Field.

QUOTING PAUL MAINIERI
“We earned a tremendous series win at Mississippi State, something that gives our players a great deal of confidence. I try to explain to our players that no matter who you are in this sport, you’re going to have your peaks and your valleys. The key is that you can’t lose confidence, you’ve got to believe in yourself, you’ve got to keep working hard and be enthusiastic. We’ve reached the halfway point of the season, and hopefully we can continue to build upon the momentum we generated last weekend in Starkville. We’ve got a couple of tough midweek games against Grambling and South Alabama, so we’re going to have to piece out pitching together and still have arms available for this weekend’s series against Texas A&M.”

ABOUT LSU
• LSU is 6-3 in the Southeastern Conference after posting a 2-1 series win last weekend over second-ranked Mississippi State in Starkville … the Tigers are just a half-game behind first-place Texas A&M (6-2-1) in the SEC Western Division standings and just one game behind first-place Georgia (7-2) in the overall league race … LSU hit .303 (33-for-109) in the Mississippi State series with 26 runs, seven doubles and three homers
• Senior third baseman Chris Reid led LSU to the series victory last weekend in Starkville, batting .750 (6-for-8) with one double, six RBI and four runs scored … Reid also walked three times and was hit by a pitch, recording a .769 on-base percentage in three games … in LSU’s 10-5 win on Friday night, Reid paced the Tigers’ 13-hit attack by going 3-for-4 at the plate with three RBI and three runs scored … in the Tigers’ 11-2, series-clinching win over Saturday, Reid provided two RBI with a double and a sacrifice fly, and he scored two runs … he was also 2-for-2 with an RBI in Thursday’s opening game of the series … Reid is batting .370 (10-for-27) in SEC games this season with two doubles and a team-best 11 RBI
• Freshman first baseman CJ Willis made his first collegiate start in the Tigers’ lineup and helped lead LSU to the series victory over Mississippi State, batting .375 (3-for-8) with one double, five RBI, three runs and a .455 on base percentage … he provided an RBI double as a pinch hitter in Thursday’s series-opening game, earning the opportunity to start in his first collegiate game in Friday’s Game 2 … Willis responded by driving in three runs in Friday’s win, including an RBI single and a sacrifice fly … he added another RBI in Saturday’s series-clinching win while scoring two runs
• Senior rightfielder Antoine Duplantis has 305 career hits at LSU and has a chance to become the all-time hits leader in SEC history; former LSU first baseman Eddy Furniss is the all-time SEC hits leader with 352 from 1995-98 … Duplantis is No. 6 on the LSU career hits list, and he is just sixth LSU player to collect 300 career hits … he batted .583 (7-for-12) last weekend at Mississippi State with two homers, two RBI and six runs scored

ABOUT GRAMBLING
• Grambling is 7-5 in the Southwestern Athletic Conference games this season … GSU was swept by Southern in its last conference series (March 22-24)
• The Tigers have lost six of their past seven games, but they posted an 8-7 non-conference win over Abilene Christian on Sunday
• Grambling is hitting .269 as a team with 12 home runs and 29 stolen bases in 35 attempts .. the Tigers are led at the plate by senior outfielder Isaiah Torres, who is hitting .385 (37-for-96) with six doubles, one triple, one homer and 23 RBI … catcher Drexler Macaay has a team-high four homers to go along with five doubles and 20 RBI