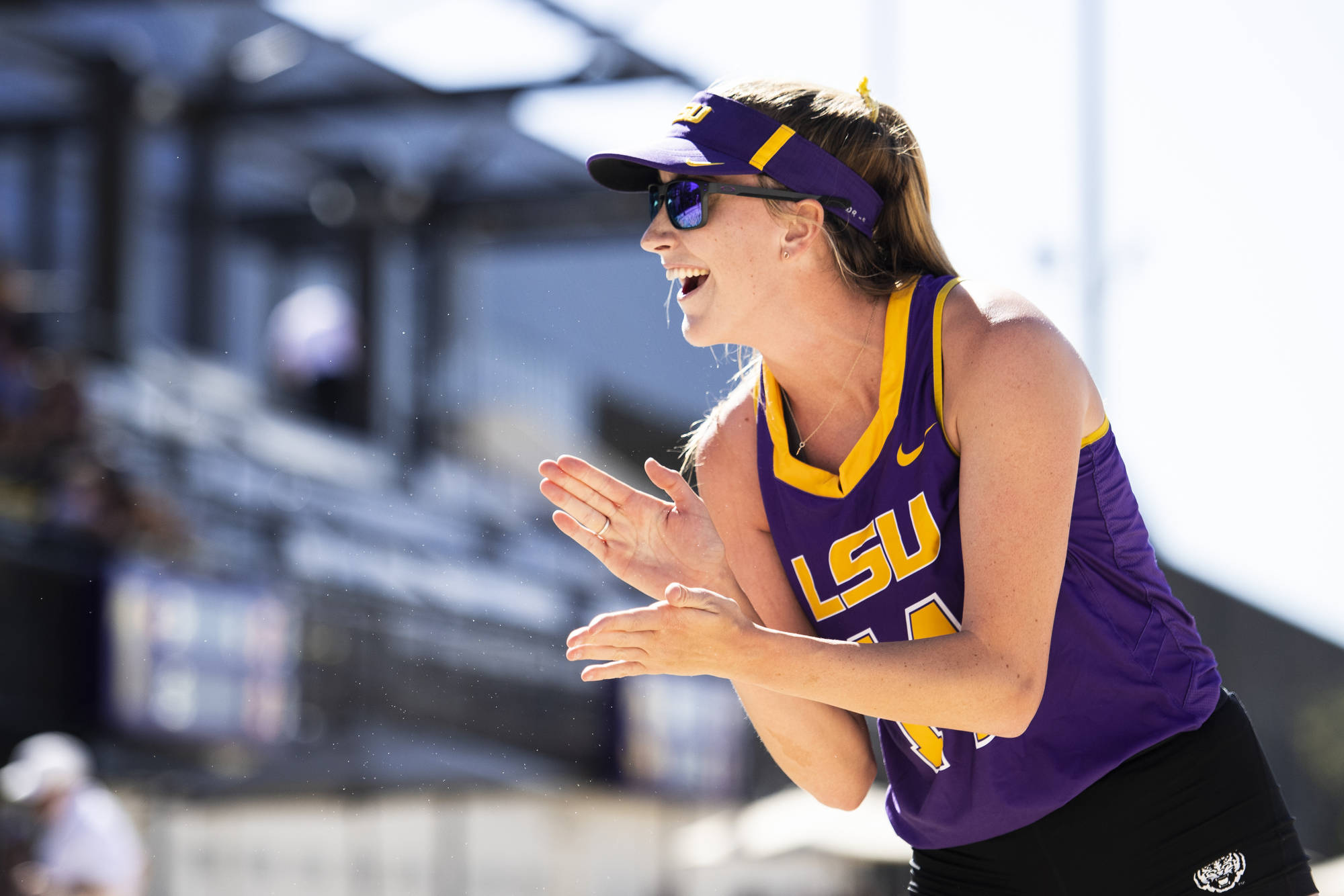 MIAMI – After earning wins over No. 10 Stetson and No. 8 Florida International on Friday in Miami, the No. 4 LSU Beach Volleyball team picked up two more top-20 victories with Saturday wins over No. 16 Grand Canyon and No. 15 Florida Atlantic at the FIU Surf and Turf Invitational.

The Tigers finished 4-1 on the weekend and advanced to 17-5 on the season with their only loss of the invitational coming against undefeated and top-ranked UCLA. LSU now has 12 wins over top-20 competition, including seven over top-10 teams.

“Everyone had moments of greatness this weekend,” said head coach Russell Brock, “and that was something we talked about heading into the weekend.”

LSU and Grand Canyon had the first match of Saturday morning at Lummus Beach Park on South Beach. Despite an early start time, the Tigers came out wide awake. The junior pair on Court 1 of Claire Coppola and Kristen Nuss picked a straight-set victory, 21-13 and 21-12, to get things going.

Sophomore Kahlee York and freshman Kelli Agnew earned a two setter on Court 2 in dominant fashion, 21-14 and 21-16. Freshman Allison Coens and sophomore Hunter Domanski would battle hard on Court 5, but ultimately fell, 21-17 and 21-19.

Senior Toni Rodriguez and freshman Ashlyn Rasnick-Pope also won in straight-sets, 21-18 and 21-18, on Court 3, clinching the match for LSU. Senior Olivia Beyer and junior Maddie Ligon closed it out for LSU on Court 4, taking the match 21-19 and 25-23.

After three consecutive wins against ranked competition, the Tigers went into their final match of the weekend against FAU with confidence.

Once again, Coppola and Nuss opened up with a dominating performance, 21-16 and 21-11, on the top court as the duo picked up their 77th career victory. This sets them up to potentially become the two winningest individuals in program history next weekend at the LSU Beach Invitational. Katie Lindelow currently holds the record with 80 wins in her LSU career.

“Claire and Kristen showed once again why they are one of the elite pairs in the country,” Brock said.

Domanski and Coens would drop the first set, 21-19, on Court 5. In the second set though, the came back strong, 21-18, to set up a decisive third set which they also won, 15-13, clinching the match for LSU. The Tigers are now 15-1 when Coens and Domanski take Court 5 and Coppola and Nuss take Court 1 in the same match.

“We made a focused effort to reach excellence as a group and that really pushed us into a special place,” said Brock. “To play as well as we did in these conditions and on this surface is a testament to the pride these players have and the hard work that we’ve been putting in this spring.”

The Tigers be home the next two weekends to close out the regular season. LSU will host Texas A&M-Kingsville, South Carolina, TCU and Houston Baptist next weekend, April 6-7 for the LSU Beach Invitational.

“We’re looking forward to going home to get back to work,” said Brock. “We’re really excited for another weekend in our home stadium in front of our fans.”