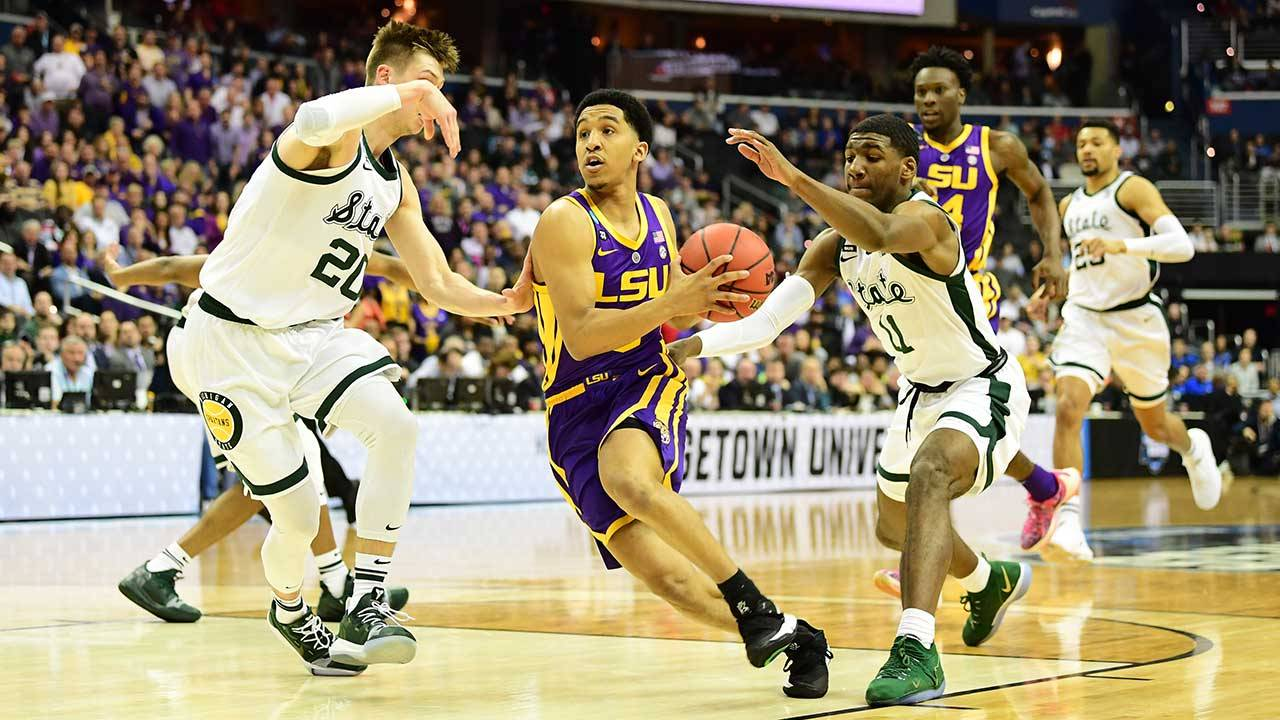 WASHINGTON — Third-seeded Michigan State made 13 three pointers to answer each run LSU made on Friday night in the NCAA Sweet 16, as the Spartan advanced, 80-63.

LSU (28-7), champions of the Southeastern Conference and seeded third in the East Region, saw its season come to an end in its 10th NCAA Regional Semifinal appearance.

The Tigers cut a 17-point first-half deficit to four in the first four minutes of the second half. However, Michigan State answered with an 11-0 run and LSU got no closer than nine for the duration.

Tremont Waters led the charge for LSU, which was held under 40-percent shooting. Waters had 23 points including four three pointers. Forward Kavell Bigby-Williams added 11 points while Naz Reid scored 10 and had nine rebounds.

Aaron Henry was 9-of-14 shooting to lead Michigan State with 20 points, while Big Ten Player of the Year Cassius Winston had 17. Freshman forward Gabe Brown made a team-high four three pointers and finished with 15 points.

Michigan State freshman forward Aaron Henry made a free-throw line jumper and a transition three pointer, followed by another trey from Winston that forced LSU to use its first timeout trailing 8-0 with 18:13 on the clock.

A pair of layups including a three-point put the Tigers on the scoreboard early, 10-5, however, the Spartans were heating up from three-point range.

Michigan State made 5-of-9 threes to start the contest, as Winston and Brown had two apiece.

Trailing 19-9 after a traditional three-point play by Michigan State, Mays scored seven-straight for the Tigers to trim the deficit to 22-16 with 11:25 to play in the half.

Just as the Tigers looked to have the Spartans measured up, rebounding helped give MSU a 12-1 run and a 34-17 lead with 6:19 left in the half. Michigan State outrebounded LSU 18-6 at this point, and Naz Reid picked up his second personal foul.

A dunk and a jumper in the paint by Marlon Taylor helped LSU cut into the deficit, 40-25, with less than a minute to play in the half.

After holding the Spartans scoreless for the final 2:11 of the half, LSU got a big three from Waters – his 10th point of the half – with 2.5 seconds remaining to cut the halftime deficit to 40-28.

LSU’s 28 first-half points were its fewest the 2018-19 season, while its 12-point deficit was also its largest of the season.

The Tigers came out of the lockerroom exactly the same way they left the court, with Waters generating offense. Waters scored the first seven points and fed the ball to Bigby-Williams who was fouled. Bigby-Williams’ free throw had LSU down only four, 40-36, barely two minutes into the half.

After another Bigby-Williams dunk off a pass from Waters, Michigan State responded with an 11-0 run of its own which led to LSU calling timeout down 56-41. With three more three pointers, the Spartans had made 11 of the first 22 three pointers attempted.

LSU used power layups by Reid and a three-pointer by Darius Days to stay within 12, 60-48, but Brown rolled off five straight and the Spartans extended to 66-48 with 9:30 left.

Trailing by 16 with With less than six minutes to play, LSU took another run at the Spartans big men after Nick Ward left the game with an injury. Bigby-Williams fourth-chance layup was followed by consecutive baskets by Reid that cut Michigan State’s lead to 70-61 with 3:06 remaining.

However, Matt McQuiad scored six-straight including Michigan State’s final three pointer of the contest to put the Tigers away with a 76-63 lead inside of two minutes to play.