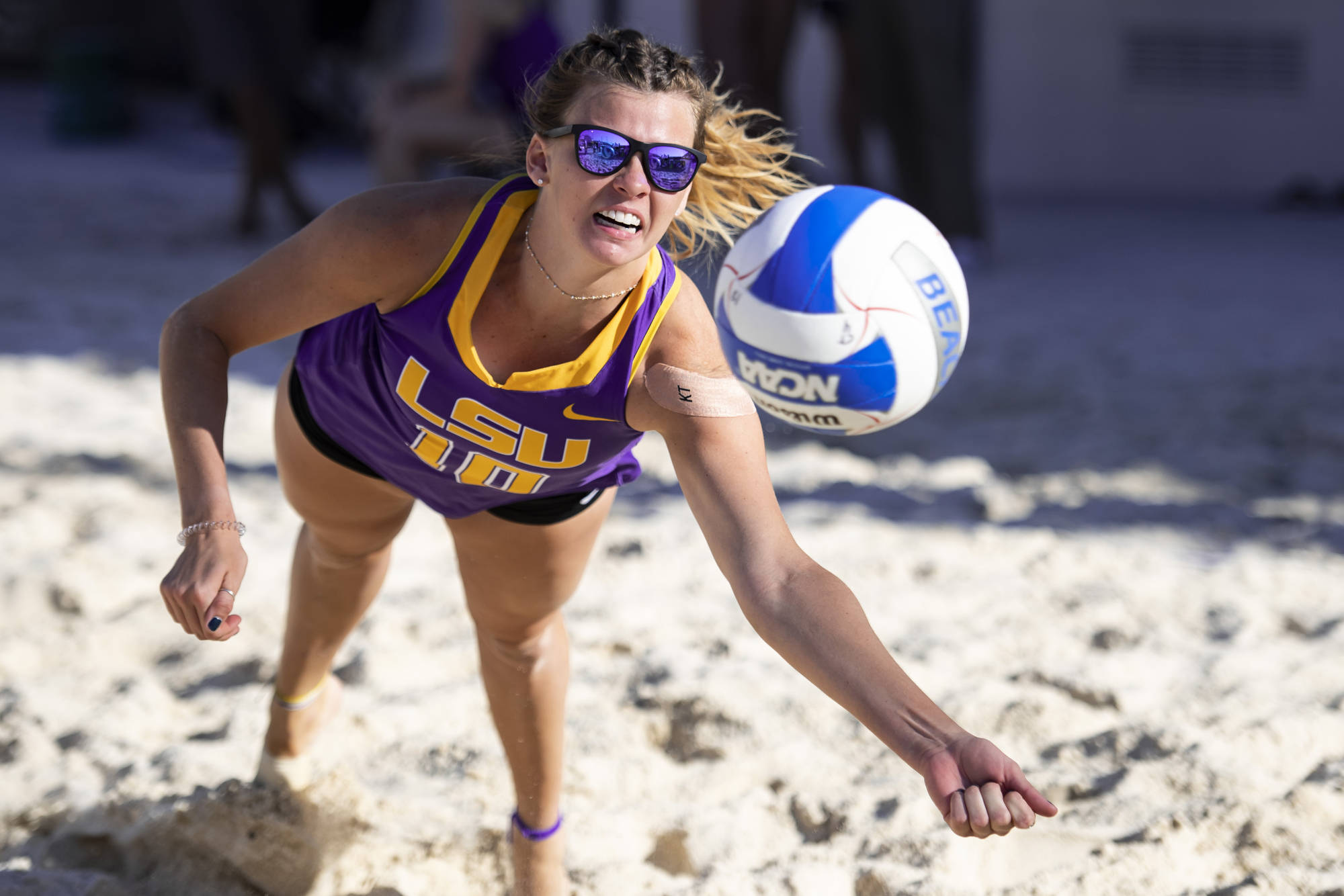 MIAMI – The No. 4 LSU Beach Volleyball teams picked up its sixth and seventh top-10 victories of the season with wins over No. 10 Stetson and No. 8 Florida International Friday at the FIU Surf and Turf Invitational.

“The weather this morning was really rough with wind and rain and then it stayed windy all day,” said head coach Russell Brock. “Playing on a fast surface and windy conditions is definitely not our strongest situation, but we played well enough to get the wins we needed today.”

Heading into Friday, LSU had already picked up top-10 wins against No. 6 Cal Poly, No. 3 FSU, No. 9 South Carolina, No. 3 Pepperdine and No. 5 Hawaii. Before LSU would add to that total it attempted its shot at No. 1 and undefeated UCLA.

The Tigers fell to UCLA in an early morning matchup as the Bruins remained undefeated on the season. Juniors Claire Coppola and Kristen Nuss fell in straight sets on Court 1 for just their third loss of the season. Likewise, on Court 2, sophomore Kahlee York and senior Ashley Allmer would fall in straight sets.

Freshman Melia Lindner and senior Megan Davenport provided some hope for the Tigers on Court 4 though, taking the final two sets, 21-11 and 15-12 after dropping the first set. Senior Olivia Beyer and freshman Kelli Agnew on Court 3 along with freshman Allison Coens and Hunter Domanski on Court 5 both took matches to three sets, but the Bruins, who had dropped just five courts all season entering Friday, prevailed for the 4-1 victory over LSU.

A quick rebound was necessary though as LSU faced No. 10 Stetson just a couple hours later in the teams’ only matchup of the season, a potentially critical matchup when it comes to postseason selection in just a few weeks.

Coppola and Nuss got back on track quickly with a straight-set, 21-10 and 21-13, victory on Court 1. Junior Olivia Powers and freshman Ashlyn Rasnick-Pope would fall in two sets on Court 2 though, 21-18 and 21-15, as Stetson evened it up.

“I was really impressed with how our team handled all the lineup changes,” said Brock who used three unique lineups Friday. “We are still working to find our best lineup and everything we tried today worked well and gave us incredible feedback.”

In the third match of the Tigers’ triple header, LSU faced host FIU. Coppola and Nuss picked up where they left off against Stetson with another straight set victory, 21-11 and 21-19. York and Agnew would stumble on Court 2 though, 21-18 and 21-19, as FIU was able to pick up the court.

The Tigers would add one more court when Beyer and Ligon took Court 4 in three sets. After dropping the first set, 21-14, the LSU duo came back fighting to take the last two sets, 21-19 and 15-11.

“Tomorrow is a new task and we have to get ready to finish well,” said Brock. “ It’s another opportunity to grow as a team.”

LSU will be back in action early Saturday morning to take on No. 16 Grand Canyon at 8 a.m. CT before it finishes the weekend at 3 p.m. CT against Florida Atlantic.