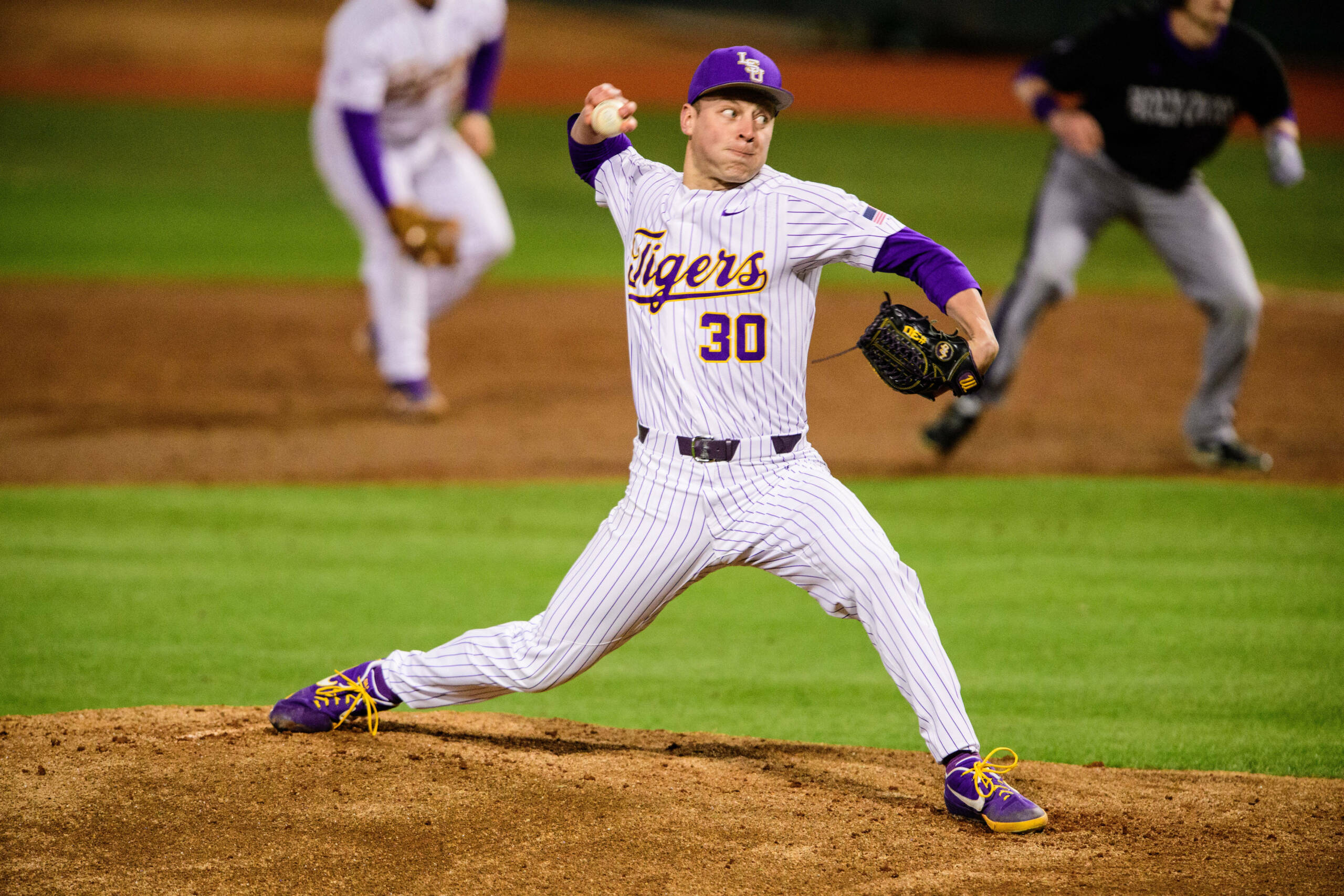 STARKVILLE, Miss. – The No. 12 LSU baseball team mounted a comeback in the eighth inning to cut the No.2 Mississippi State baseball lead to one run but ultimately fell, 6-5, in Game 1 of the series Friday night in Dudy Noble Field.

Mississippi State improves to 24-3 on the year and 5-2 in the Southeastern Conference while LSU drops to 17-9 and 4-3 in the league.

Game 2 of the series between LSU and Mississippi State is slated for Friday at 6 p.m. CT on the SEC Network. Fans can listen to the game on 100.7 FM in Baton Rouge and online at LSUsports.net/live.

“We had a chance,” head coach Paul Mainieri said. “We had some big at-bats, big hits. (Trent) Vietmeier was tremendous, gave us a chance and we had situations with the heart of our order up. We came close; we just came up short.”

Ethan Small improved to 3-0 on the year after allowing two runs on three hits. The southpaw walked four and struck out 10 in five innings. Cole Gordon entered to pitch the final 1.1 innings of the game and limited the Tigers to one hit on the way to his seventh save of the season.

Zack Hess suffered the loss and dropped to 2-2 on the season after allowing six runs on 11 hits, walking one and striking out three in 4.1 innings. Trent Vietmeier was fantastic out of the bullpen. The sophomore right-hander walked three and struck out three in his 3.2 shutout innings.

In the top of the first inning, right fielder Antoine Duplanits worked a two-out walk before left fielder Daniel Cabrera belted his sixth home run of the season for a two-run blast to give LSU the early 2-0 lead.

Mississippi State center fielder Jake Mangum led off the bottom of the third with a double down the left field line. With two outs, right fielder Elijah MacNamee was hit by a pitch and third baseman Justin Foscue followed with a three-run home run, making it a 3-2 game in favor of the Bulldogs.

The Bulldogs tacked on a run in the bottom of the fourth inning when designated hitter Josh Hatcher scored on shortstop Jordan Westburg’s double to the right-center gap after leading off the inning with a base hit to make it a 4-2 game.

MacNamee and Foscue hit back-to-back solo home runs to left field in the bottom of the fifth to extend the Bulldog lead to 6-2.

The Tigers rallied in the top of the eighth inning to cut the lead to one run. Cabrera and designated hitter Giovanni DiGiacomo led off the inning with consecutive base hits and moved to scoring position on a ground ball to first base. A grounder to shortstop by first baseman Cade Beloso moved DiGiacomo to third and brought in Cabrera. CJ Willis entered to pinch hit and roped a double to left-center to drive in DiGiacomo, and third baseman Chris Reid lined a single into right field to make it a 6-5 game.