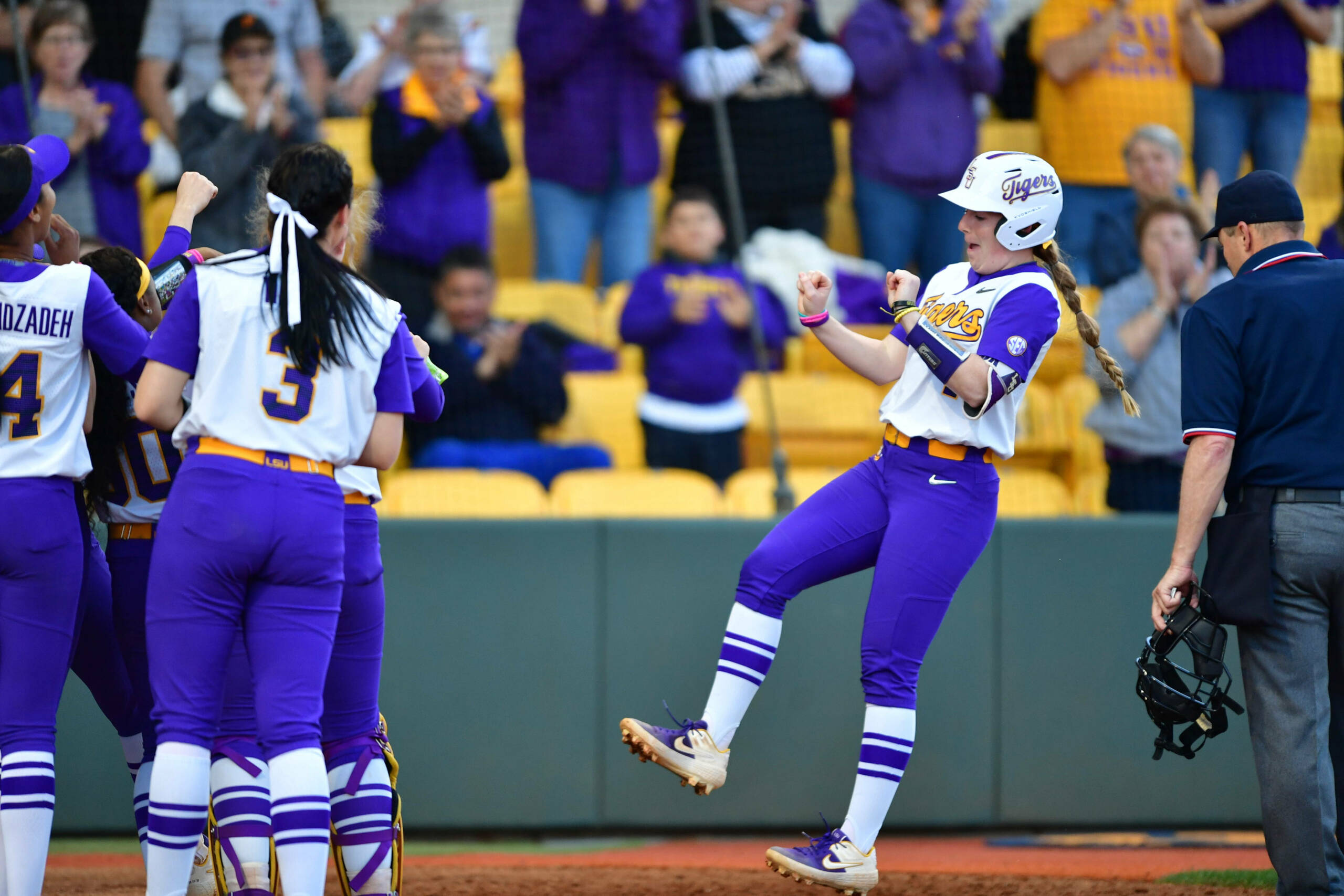 BATON ROUGE– The No. 8/5 ranked LSU softball team run-ruled Nicholls, 12-1 Wednesday night in Tiger Park. The Tigers improve to 29-6 on the year, while the Colonels fall to 15-14.

The Tigers wasted no time at the start of the game, putting one run on the board in the bottom of the first. Aliyah Andrews reached on a bunt and then stole second when she had the chance, followed by a single up the middle from Amanda Sanchez, scoring Andrews. Shelbi Sunseri reached on a hit-by-pitch, but the next three Tigers went down in order. LSU led 1-0 at the end of the first.

In the bottom of the fourth, Amber Serrett singled up the middle, followed by another single to left field from Amanda Doyle. On a 1-1 count, Michaela Schlattman hit a three-run homer to center field, upping the Tiger lead 4-0. Andrews got on base again with a single to the shortstop, and stole second. Amanda Sanchez ripped the ball to left center, scoring Andrews to record her 39th RBI on the year.

With one out and the bases loaded, Elyse Thornhill reached on a fielder’s choice to second base and one Tiger ran in to score. Shemiah Sanchez also scored after Serrett sent a sacrifice fly to right field, but reached on an error. Doyle singled through the left side, followed by a fielder’s choice and an error on a Jordyn Perkins ground ball to score Serrett. Georgia Clark singled to right center to tally two RBI, giving LSU a 12-0 lead.

Shelby Wickersham held it down in the circle, finishing with five strikeouts. She allowed only two hits in the fifth inning and improves to 9-1 on the season.

“She’s really grown as a freshman with almost no hiccups the whole way. It’s so rare. She’s carried us so many times this year.”

On preparation for the game…

“We did make some adjustments with little things. We’re giving a little more attention on fundamental stuff instead of just trying to get prepared for the game, which is really hard to do this time of year because you’re trying to get prepared for an opponent. But, we’ve tried to put time into the little things that got us to be a good defensive team and got us to be where we are now. I think a lot of the stuff we’re doing is paying off. It’s always fun to see as a coach because you get a lot more buy-in when the things you do work.”

The Tigers will be at home this weekend for a three-day SEC series against No. 16 South Carolina. The game on Friday will be at 6 p.m. and will stream live on SECN+.