LSU-McNeese Tuesday Night at 'The Box' 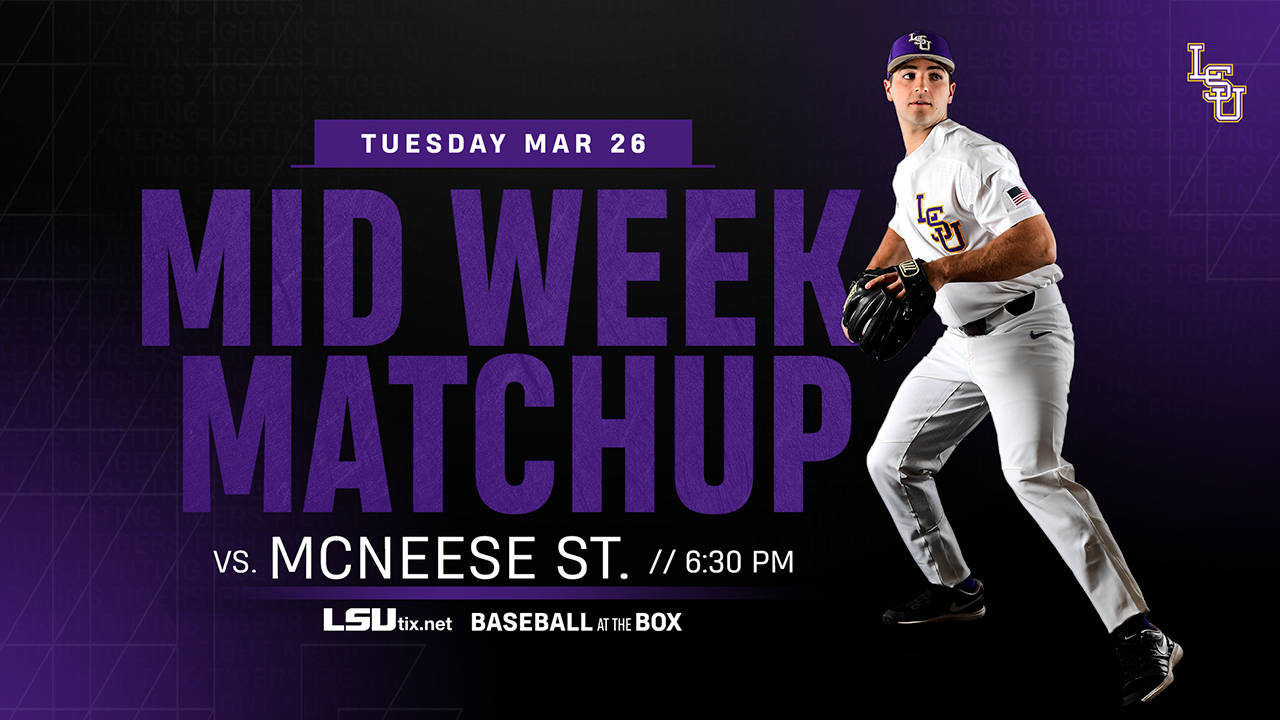 ONLINE
The game may be viewed on SEC Network+

QUOTING PAUL MAINIERI
“When our schedule was first released, I knew this seven-game stretch – Georgia on the road, at home against McNeese, and Mississippi State on the road – would be the most challenging portion of the season. We just finished a series in Athens against the No. 5 team in the nation, and this weekend we’ll be facing the No. 2 team in the nation. In between those series, we’re facing a very good McNeese ball club that’s beaten us two of the last three times we’ve played them. That’s why this business is not for the faint of heart.”

ABOUT THE TIGERS
• LSU is 4-2 in the Southeastern Conference, just one game behind first-place Arkansas and Texas A&M in the SEC Western Division … Friday night’s win at Georgia gave the Tigers their first 4-0 start in SEC play since 1998
• LSU is 8-1 this season in one-run games, and the Tigers have four walk-off wins, including a 5-4 victory over Nicholls on Wednesday night in Baton Rouge … the win over Nicholls also marked LSU’s eighth come-from-behind victory this season
• Junior right-hander Zack Hess delivered a superb performance on Friday night, as he posted a dominating win over fifth-ranked Georgia in Athens … Hess blanked the Bulldogs through eight innings, scattering eight hits with no walks and nine strikeouts … Georgia entered the game No. 4 in the SEC with a .296 team batting average … Hess improved to 2-1 on the year and lowered his ERA to 2.97 … in his two SEC starts versus Kentucky and Georgia this season, Hess is 1-0 with a 0.60 ERA, allowing just one earned run on 12 hits in 15 innings with 15 strikeouts
• Freshman outfielder/DH Giovanni DiGiacomo was LSU’s leading hitter in its four games last week, as he batted .357 (5-for-12) with one RBI and two runs
• Sophomore outfielder Daniel Cabrera drove in five runs last week, including the game-winning, walk-off double in Wednesday night’s victory over Nicholls
• Freshman right-hander Cole Henry delivered an excellent performance at fifth-ranked Georgia on Saturday, working a career-long 7.1 innings and limiting the Bulldogs to two runs on two hits with one walk and a career-high eight strikeouts
• Junior right-hander Matthew Beck has pitched 12 straight scoreless innings over his last seven outings, allowing just three hits with 11 strikeouts
• Junior centerfielder Zach Watson extended his current hitting streak to 10 games over the weekend at Georgia … Watson is LSU’s leading hitter on the year, batting .376 with nine doubles, two homers, 18 RBI and 26 runs
• Junior shortstop Josh Smith has reached base safely in all 23 games he has played this season
• Senior rightfielder Antoine Duplantis has 298 career hits at LSU and has a chance to become the all-time hits leader in SEC history; former LSU first baseman Eddy Furniss is the all-time SEC hits leader with 352 from 1995-98 … Duplantis is No. 6 on the LSU career hits list, and he is seeking to become just sixth LSU player to collect 300 career hits

ABOUT THE COWBOYS
• McNeese head coach Justin Hill was a pitcher at LSU in 2001 and 2002
• The Cowboys are 2-4 in the Southland Conference, and they were swept last weekend by Incarnate Word in an SLC series
• McNeese is hitting .283 as a team this season with 20 home runs and 46 steals in 58 attempts
• Junior outfielder Clayton Rasbeary is batting .315 with four home runs and 22 RBI; senior infielder Carson Maxwell is batting .300 with five homers and 27 RBI, and junior utility player Nate Fisbeck is hitting .271 with six dingers and 19 RBI