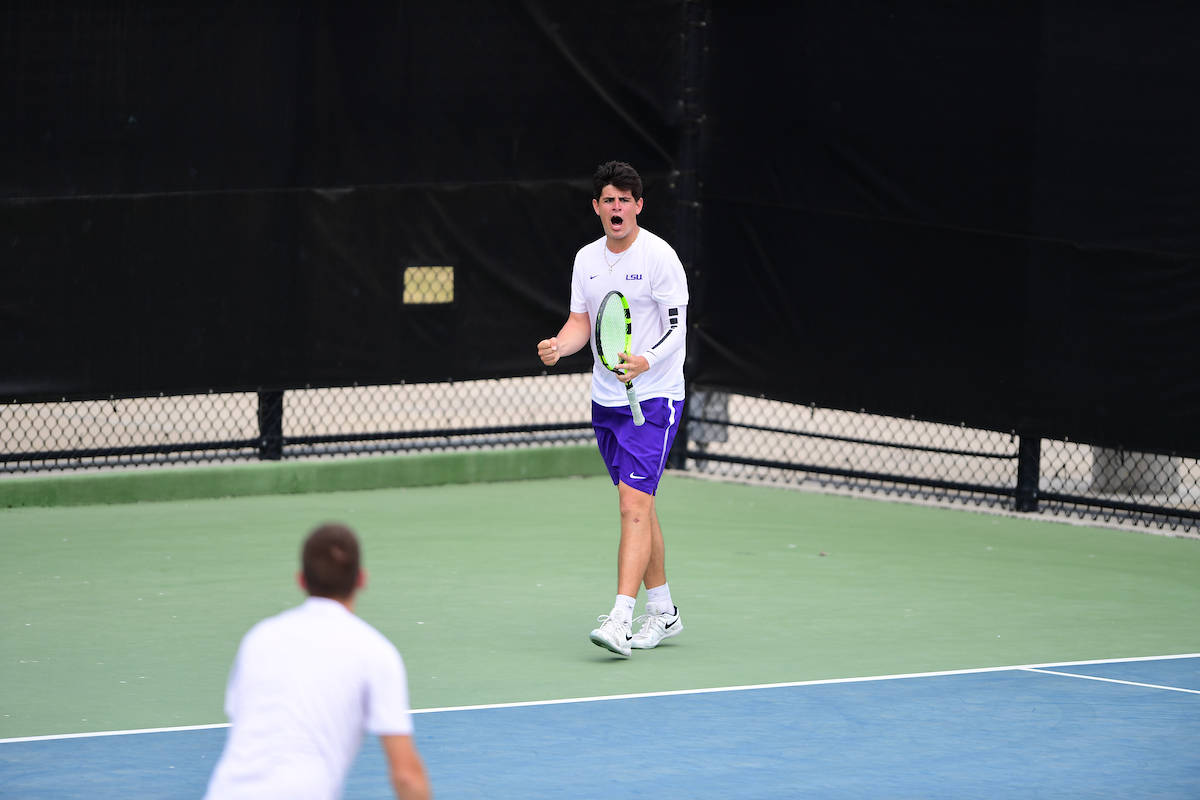 BATON ROUGE — The LSU men’s tennis team clinched the doubles point on court three and rattled off four-straight singles wins to notch a 5-2 victory against No. 25 Arkansas on Sunday at the LSU Tennis Complex.

Co-Head Coach Chris Brandi on the Match
“We think that might be our best win of the year. Arkansas came in here in the top 25 and in the top of our conference. They have had some great wins and a great year themselves. We think our guys from top to bottom just competed amazingly well. Even the matches we lost, they were in three sets, and we had chances at the end. We are really proud of the guys. We think they really took it up another notch today. The SEC does not get easier. Next weekend we are on the road against two really tough teams. We are going to have to play better, but we are really proud of this group, especially Daniel Moreno coming in on short notice in singles.”

Doubles Point
Arkansas’ duo of Oscar Mesquida and Adam Sanjurjo struck first in doubles action with a 6-3 win against Rafael Wagner and Joey Thomas at No. 1 doubles.

Daniel Moreno and Shane Monroe knotted the score back up with a 6-4 victory at No. 2 doubles for LSU against Maxim Verboven and Enrique Paya.

Boris Kozlov and Nick Watson clinched the doubles point for the Tigers on court three with a gutsy 7-5 win against Alex Reco and Jose Alonso.

Singles Results
The Tigers extended the lead to 2-0 when Thomas took a quick 6-1, 6-2 win on court five against Pedro Alonso.

LSU clinched the match with a 2-6, 6-4, 6-2 win on court six from Moreno. He overcame a first set loss to Jose Alonso and stormed back to earn the win.

Arkansas earned their first singles win of the match on court three when Reco defeated Malik Bhatnagar in a 4-6, 6-3, 7-6 victory.

Mesquida notched the second singles win of the day for the Razorbacks with the 3-6, 7-5, 6-3 win against Monroe on court one.

Next Up
LSU will head to Gainesville for a 4 p.m. match with the Florida Gators on Friday, March 29.