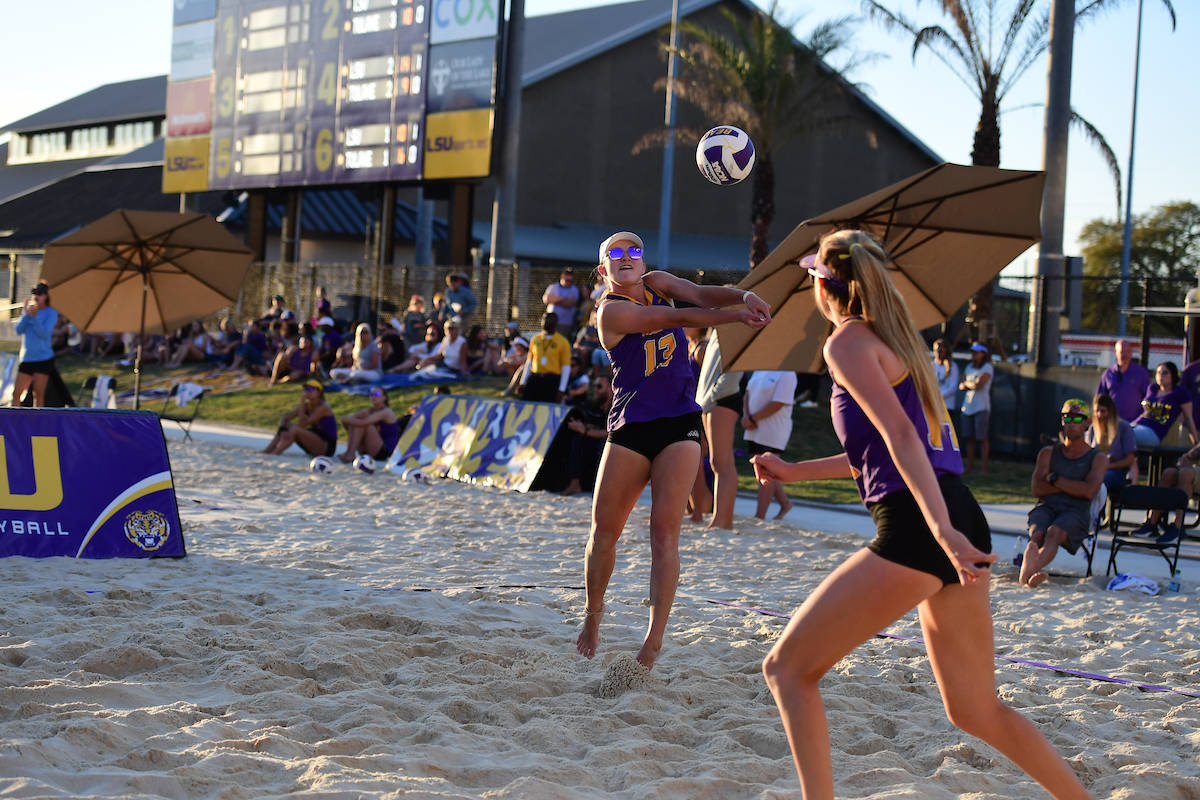 BATON ROUGE –  After sweeping through North Florida and Tulane on Friday, No. 4 LSU defeated No. 19 Georgia State and Southern Mississippi Saturday at the Tiger Beach Challenge to finish the weekend with a perfect record.

“Every time we stepped in the sand we got pushback,” said head coach Russell Brock whose team is now 13-4 on the year. “It was good to see the team respond to that and get through unscathed.”

“I’ve never thought about stuff like that and when you bring it up, it’s so awesome that I get to share it with Kristen,” said Coppola. “I feel really lucky and blessed that we both ended up here and I couldn’t ask for anything better.”

“It’s pretty surreal because Cati Leak is a great player,” said Nuss. “I wouldn’t want to do it with anyone else so it’s pretty exciting and cool. We’re pumped to get some more wins.”

“The fact that they’ve done it this early in their career,” said Leak who played here from 2014-2017 and became the assistant coach during the past offseason. “It’s exciting to see where they’re headed. To get to witness this is an honor.”

Coppola and Nuss have competed in every collegiate match together and already hold LSU’s record for all-time wins as a pair. The individual win’s record is held by Katie Lindelow who gathered 80 wins in her LSU career.

To finish 4-0 on the weekend, the Tigers had to go through No. 19 Georgia State early in the afternoon who proved to be a difficult opponent.  LSU and GSU split matches on Courts 4 and 5. Freshman Allison Coens and sophomore Hunter Domanski won on Court 5, 21-16 and 21-19, to pick up a court for the Tigers. Graduate transfer Taryn Kloth and junior Maddie Ligon fell on Court 4 though, 21-19 and 21-17.

Courts 1-3 for the Tigers would need all three sets to come away with victories. Coppola and Nuss would clinch first. After taking the first set, 21-14, the Tigers’ top duo fell in set two, 21-18. They came out swinging in the deciding set though and took it, 15-9, to give LSU a 2-1 court lead.

Junior Olivia Powers and freshman Ashlyn Rasnick-Pope dropped their first set on Court 2, 24-22. They clawed their way back in the second set, 21-15, before taking the third set, 15-11, to clinch the match for LSU over GSU.

“Liv did a great job of keeping the energy up and we just knew that we could pull it out,” said Rasnick-Pope. “The Tigers came out on top and that’s what matters.”

Senior Toni Rodriguez and freshman Kelli Agnew would add another point for the Tigers. After the LSU duo fell in set one, 22-20, it took set two, 21-11. In the third set, Rodriguez and Agnew would cap off LSU’s 4-1 victory with a 15-12 set win.

In their final match of the Tiger Beach Challenge, the Tigers faced Southern Mississippi, a program in its inaugural season. LSU was able to change up some pairs to earn another 4-1 victory.

Coens and Domanski won their eighth-straight match when they dominated Court 5, 21-10 and 21-6. Freshman Melia Lindner, seeing her first action as a Tiger, paired up with senior Megan Davenport on Court 4. After dropping set one, 23-21, the LSU duo forced a third set after taking set two, 21-12. In the deciding set, Lindner and Davenport fell, 15-13, evening the match.

Coppola and Nuss made quick work on Court 1 when they tied Leak. The dynamic LSU duo won in straight sets, 21-11 and 21-9. Senior Olivia Beyer would pair with Agnew on Court 3 as they would earn a sweep, 21-15 and 21-14, clinching the match and the perfect weekend for the Tigers.

Powers and senior Ashley Allmer would follow suit on to finish off the match, 24-22 and 21-19.

The Tigers will travel to Miami next weekend for five matches against stiff competition at the FIU Surf-and-Turf. LSU, who already has seven wins against ranked competition, will face No. 1 UCLA, No. 10 Stetson and No. 8 FIU on Friday before taking on No. 17 Grand Canyon and No. 16 FAU on Saturday.

“We have to get our physical condition in order so we can play five tough matches on the road and put our best foot forward as we head into the stretch end of the season,” said Brock.