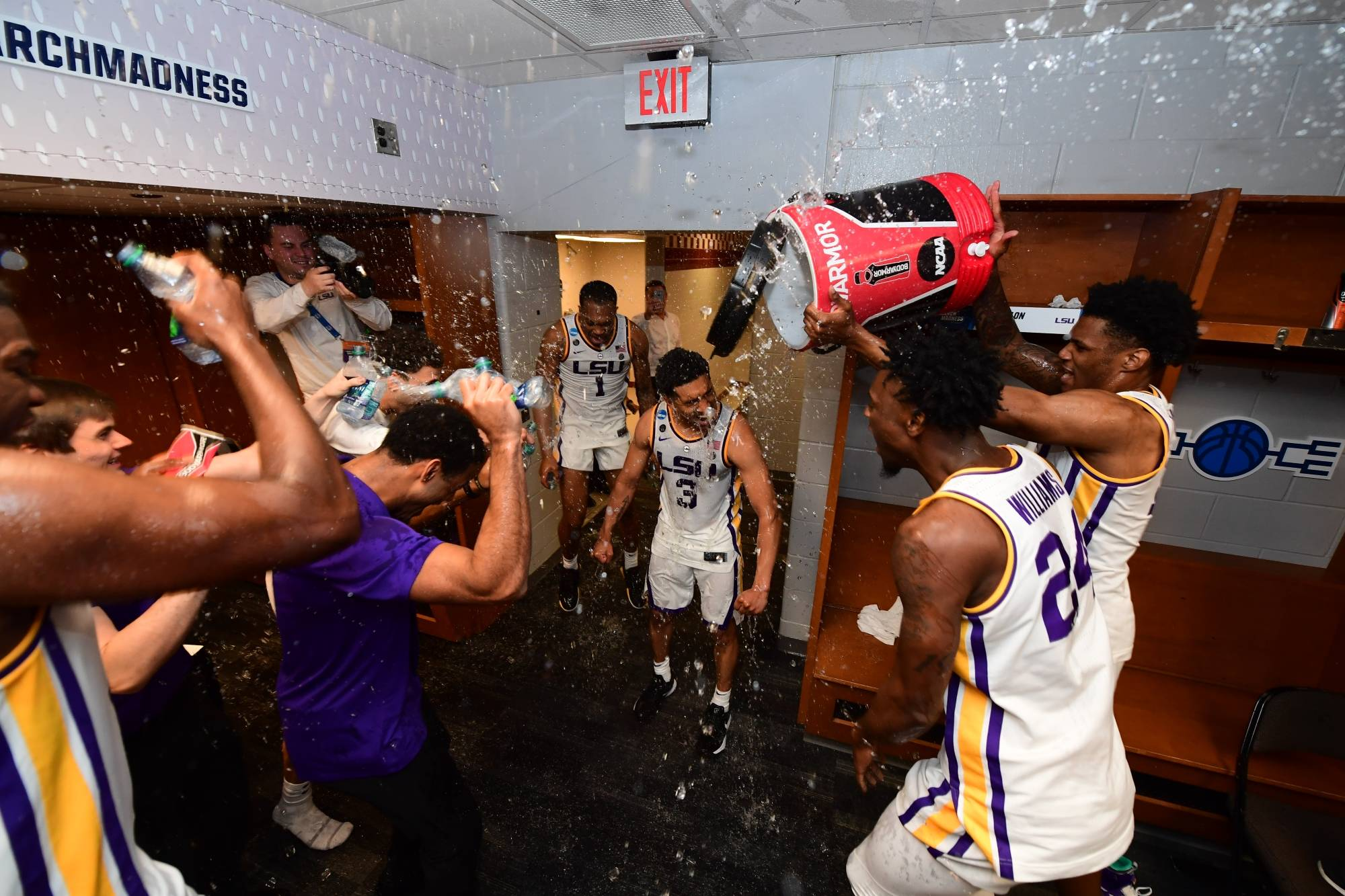 JACKSONVILLE, Fla. — They waited. And as they waited, they debated.

Marlon Taylor was pro ice bath. Kavell Bigby-Williams made the counter argument that maybe LSU should wait until the Final Four to dump the entire cooler on someone.

And so the yeas had it. Tremont Waters, fresh off a moment he’d dreamed of his entire life, from the time he started tossing weighted basketballs to his father as a four-year-old in his New Haven living room to the day he arrived in Jacksonville for his first NCAA Tournament, was congratulated for his game-winning layup to put LSU past Maryland 69-67 and into the Sweet 16 with a freezing cold welcome to the locker room.

“I wasn’t expecting that,” Waters said minutes later, still soaked and smiling. “When Javonte (Smart) called my name, I was looking at him. When I turned, it was just gallons of water pouring down. That’s a good feeling, that our team is able to experience. And I’m glad I was able to help them feel that.”

For the third time In one game, Waters made history. Earlier in the game, he set a single-season school record with 94 steals. Shortly after halftime, he became the 42nd player in school history to score 1,000 points in his career.

None will remain in his memory for as long as the two that put the Tigers through to D.C.

With 19.5 seconds left, Skylar Mays inbounded the ball to Waters. Maryland sent a double team, and Waters passed it back to Mays, who quickly returned the favor.

At that point, everything went black.

The play call was simple, something the Tigers have run dozens of times all season. After struggling with Maryland’s zone defense for most of the second half – LSU led 46-31 with 16 minutes left, before going scoreless against the 3-2 for four minutes and allowing the Terps to eventually take their first lead of the game with 5:52 to go – Tony Benford, Greg Heiar, and Bill Armstrong went to their bread and butter.

“We’ve run it a few times during the year,” Benford said. “We knew against man and zone, especially against that three-two, we had to do a great job of screening that top guy, we told Naz, whoever is up there if they’re in the zone, just screen that guy and put a body on him, and Naz did a great job.”

Reid’s screen hit, and Waters got one-on-one with Maryland defender Jalen Smith, whose three-pointer seconds earlier had tied the score at 67. The sophomore point guard hesitated, drawing Smith out of his stance with a move that looked like it might turn into a jump shot.

“In that type of moment, you don’t want to step back and shoot a 3,” Waters said. “They had the big man, Smith, closing out on Naz to hedge. At that point, I knew there were four seconds left, and I had to get around him and put it up.”

Waters used the feint to explode past Smith toward the rim with the ball in his favored right hand. Meanwhile, on the backside, center Kavell Bigby-Williams sealed Maryland center Bruno Fernando, rendering him helpless as Waters’ shot scooped up and in off the glass.

“Everyone wants the ball in his hands at the end of the game. He’s going to make the right play. He makes plays like that all the time,” said junior guard Skylar Mays. “When it left his hands, I knew it was good. He’s got great touch, and we’re moving on.”

If not for Mays, the Tigers might not be celebrating Waters’ heroics. Before the game-winner, Mays scored five straight for LSU in crunch time: two stone-cold free throws followed by a deep three from the left wing to put his team up 67-64 with just under 40 seconds to go.

The three-point shot failed the Tigers much of the second half – they’d hit just 2 of 13 attempts from beyond the arc prior – but Mays came from the top of the key to his left and fired away, knowing if he got a shot off that LSU would likely get the final look of the game.

More exciting than actually making the shot? Maybe not.

“I’ll never forget that one,” Mays said. “I couldn’t see myself forgetting that one.”

Nor will he forget the celebration of Waters’ shot. Mays wasn’t much of a baseball player growing up, but – perhaps inspired by former baseball player turned walk-on guard Will Reese – he decided it was the opportune time to experience his first dogpile.

“I think I’m the one who started it,” he laughed. “They tried to pick him up, and I had to bring him down.”

Mays wasn’t the only newcomer to the art of the dogpile.

“I’ve never been a part of a dogpile, except when I was younger with football, and that was with equipment on,” Waters joked.  “It felt relieving after the game to make the shot. To be on the bottom of it, wasn’t a great feeling, but it was a great feeling.”

It was one Waters has dreamed about for a long time. He grew up in Connecticut, idolizing Kemba Walker and Shabazz Napier, pretending his floaters in empty gyms were game-winners on college basketball’s biggest stage.

“When Kemba Walker hit the in and out, crossover, step back to win the game, I feel like that’s one memory that always stuck out to me,” Waters said Wednesday, when LSU arrived in Jacksonville. “I’m a small point guard, so to see him do that in a clutch moment, that’s something I always dreamed about doing. Hopefully the game isn’t that close, but if it is, hopefully I can make a play.”

There’s no hoping any more. Waters has his own magical March moment now, and he has the soaking wet jersey to prove it.

“One game at a time, one play at a time.” #BootUp pic.twitter.com/odjuOBzqZo