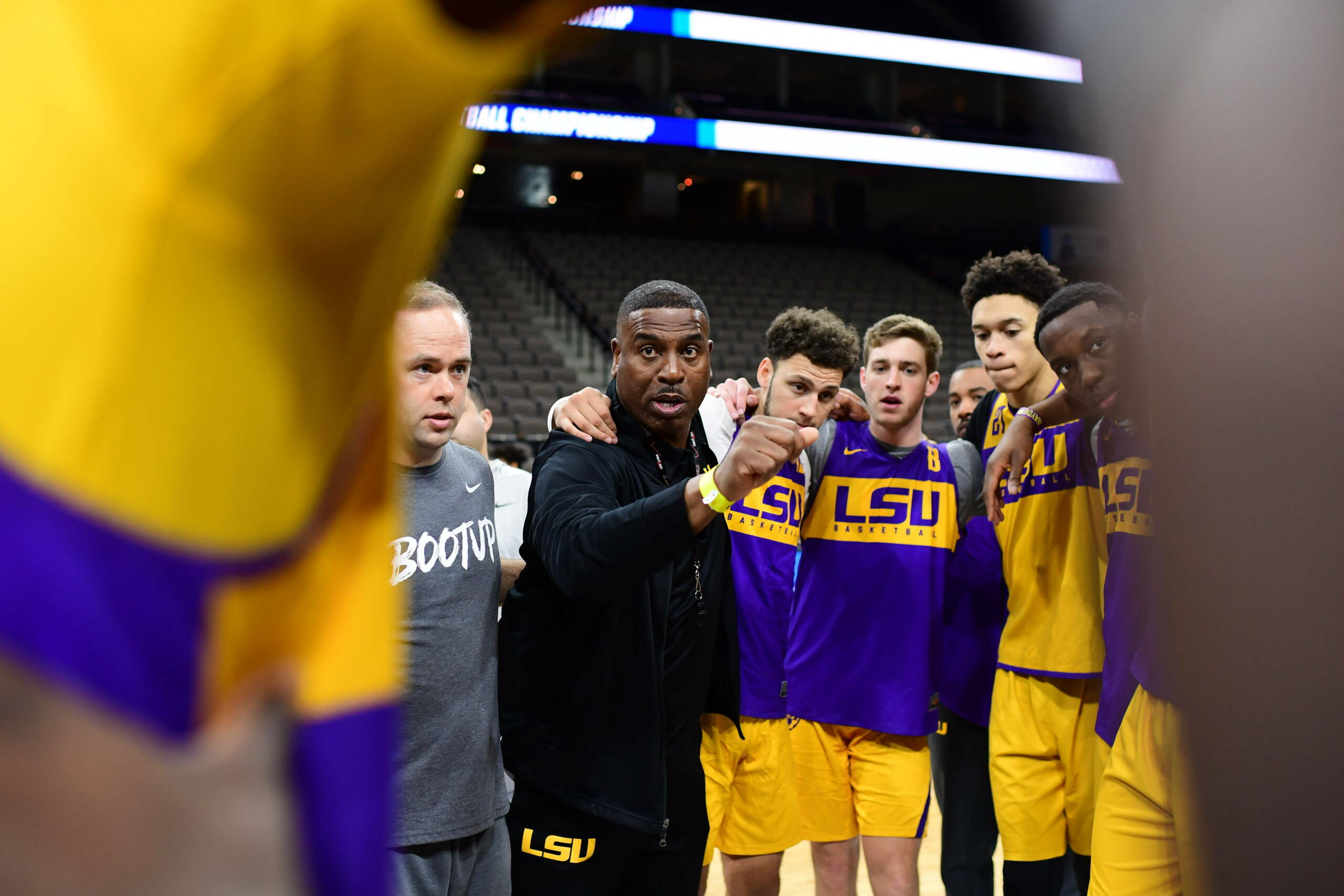 JACKSONVILLE, Fla. – The doors open at 1:35 p.m., and the reporters flood in. Their cameras focus on Naz Reid, the 6-foot-11 freshman phenom, and Emmitt Williams, the 6-foot-6 walking .gif. Their microphones crowd the faces of All-SEC guards Skylar Mays and Tremont Waters, before they move on to Javonte Smart and Kavell Bigby-Williams. They quiz Marlon Taylor about his defense and Darius Days about his rebounding, and they rotate to the next player to ask him a question he’s already answered a dozen times.

On the other side of the room, Courtese Cooper laughs. It’s not the irony that’s funny – after all, this may be the only room in America where the 6-foot-11 sophomore blends in. It’s juxtaposition of the whole scene – the stars overwhelmed by the media surge, and everyone else staring quietly at their phones, clearly uncomfortable.

“It’s really funny,” Cooper laughs. “I like to see Javonte get nervous and stuff and start stuttering. I watch Emmitt do the same thing. Tremont always has a whole bunch of cameras around him. It’s really entertaining.”

No one has questions for Cooper or his locker neighbor, Aundre Hyatt. The two are redshirts who haven’t played a minute all season. Nor does anyone approach walk-on Will Reese or former walk-on Marshall Graves, who covers his ears with Mickey Mouse Beats and FaceTimes a friend.

And certainly no one has questions for manager Corey Vinson or graduate assistant LeBrent Walker, who put away practice gear and pack for the bus trip back to the hotel.

But ask assistant coach Greg Heiar about those six, who together form the scout team tasked with emulating every team LSU player and preparing the Tigers’ starters for each of their 27 wins this season, and he’ll tell you exactly what they mean to the program.

“They’re the reason we’re the SEC champs,” he says. “They’ve been unbelievable. We’re blessed to have a great scout team.”

Take Hyatt, for example. As LSU prepared for its first round matchup with Yale, the freshman from the Bronx – Hyatt reclassified from the 2019 class to the 2018 class to sign with LSU in the fall, so he could technically still be a senior in high school – did his best impression of Miye Oni in pre-tournament practices.

How good was Hyatt’s simulation of the Ivy League Player of the Year?

“He scored more buckets in practice than Oni had in the game yesterday, I’ll tell you that,” Heiar says, a day after the Tigers held Oni to 2-of-16 shooting and five points.

A key part of the unglamorous work of the scout team is the art of impression. Cooper and Hyatt each signed with LSU as part of a plan to redshirt the season and develop their games and bodies, and picking up tidbits from the players they stand in for during scout team has helped in that aspect.

The result has not only been a boost to LSU’s prep, but also to their own play.

“They’ve developed,” Heiar says. “They’re going to help us. Both guys are going to be important pieces on next year’s team. They’re really good players.”

Ahead of Saturday’s tipoff against Maryland, Hyatt has emulated 6-foot-10 Jalen Smith, and Cooper has played as 6-foot-11 bruiser Bruno Fernando, a far more physical post than Cooper.

Other times this year, Hyatt has played point guards and shooting guards, and Cooper has been the stand-in for a lefty, taking unnatural, awkward lefty hooks that, as the season’s waged on, fall in more and more often.

As always, it’s a balancing act: playing to their strengths and skills while incorporating those of another player into practice.

“Sometimes, I have to go outside of my element,” Cooper says. “I feel like my job is to do whatever it takes to mentally prepare our team and physically prepare them. Maryland has some big bigs, and they’ve got great size. I can’t perfectly imitate them, but I can work really hard, push them under the rim, tip balls out, and try to get as many rebounds as I can.”

The flipside is both Cooper and Hyatt bring their own talents to the table. Hyatt is a high IQ sniper who has reshaped his body and can bully his way to the rim.

“He doesn’t get tired,” Heiar says. “He can run like a deer. We’re lucky to have him for the scout team. Most guys would need a sub. He can practice all day without needing a sub. And he’s got a 7-4 or 7-5 wingspan.”

That’s before Heiar puts three-foot long sticks in his hands and tells him to get deflections and blocks every defensive possession.

“We give him the sticks and he’s got a 10-foot wing span, and they’re all complaining,” Heiar laughs. “And I say, ‘If you can score on the sticks, you can score at the next level.’”

In the locker room, Cooper laughs about the media ghosting the scout team.

For Hyatt, it’s something to strive for.

The Walk-On and the Former Walk-On

The star of the scout team is Graves, who moonlights as the ninth man in the LSU rotation. The junior ex-walk-on has hit 36 percent of his 3s in 10 games off the bench for the Tigers, but when he puts on the black jersey in practice, the starters in purple get nervous.

“There’s days he hits 20 3s in practice on those guys,” Heiar says.

“It’s a rough day when Marshall gets hot,” Mays laughs.

Perhaps no one has a more taxing role than Graves. Not only does he have to learn the intricacies of the opposition, but he also has to digest LSU’s game plan fully, in case his services are required in the game.

“I definitely think if you’re someone who gets in your own head a lot or not as mentally strong, you’ll definitely struggle with it,” he says. “My faith is the biggest part of anything I do, so I’m always prepared. I know God has me where I’m supposed to be, so whether it’s 26 minutes or not at all, I’m going to be exactly where my feet are.”

In Friday’s prep for Maryland, those feet spent 10 minutes on the scout team and the rest of practice in Purple.

“I always mess with purple: ‘It’s not as fun playing with y’all, because I don’t get the freedom to shoot the ball from half court,’” Graves jokes.

Just like on the purple team, every player on scout has a role. Reese was one of the best multi-sport high school athletes in Louisiana. On the basketball court, he averaged 27 points per game and led Anacoco to back-to-back state basketball titles, earning Most Outstanding Player honors at the 2015 Top 28. He also won back-to-back baseball state titles before pitching for two seasons at LSU.

“He’s been a winner his whole life,” Heiar says.

Reese joins Bigby-Williams as the only LSU player with NCAA Tournament experience. His came in baseball, when the Tigers reached the final of the 2017 College World Series.

“It’s pretty similar,” Reese said of the NCAA Tournament and College World Series. “It’s the biggest stage in college sports for both sides. A lot of media. It gives our guys on the team a chance to make a name for themselves. It’s very exciting. I hope we can move on like we did in Omaha and see how far we can make it.”

The Manager and the Grad Assistant

Vinson and Walker complete the Tigers’ scout team. Though neither is on the roster, both played college ball – Vinson at the University of New Orleans for two seasons and Walker at Washington Adventist University, an NAIA school in Maryland, where he grew used to eight hour bus rides.

“I used to watch it all the time,” Walker says. “Actually experiencing it is a joy.”

Vinson, meanwhile, alternates in practice between his duties as a manager and as a scout team point guard. He and Walker often draw wake-up duty, knocking on players doors every morning to make sure they’re up for breakfast.

“It’s very tiring, doing all the manager stuff then going out there to play,” he says. “But it’s fun. I love the game of basketball.”

He can play, too.

“Some days, Corey looks like he could play for us with his quickness. He shoots the ball so well,” Mays says, before he stops himself with a laugh.

“It feels like I’m doing the scouting report on an actual player we’re playing against.”

Heiar gives the best scouting report of the scout team. He and Bill Armstrong are most often charged with teaching them the opponents’ plays and tendencies, and he’s coached players at previous schools, like Ron Baker and Fred Van Vleet at Wichita State, who started their careers as scout teamers and ended them as All-Americans.

This group, he says, has all the same tools – the talent and the character. It’s why LSU has an SEC title and an NCAA Tournament win under their belt, and it’s why they’re not finished yet, either.

“They listen, they try, they can apply it, and they do a great job of competing,” Heiar sais. “When you’ve got that as your scout team, that’s priceless.”