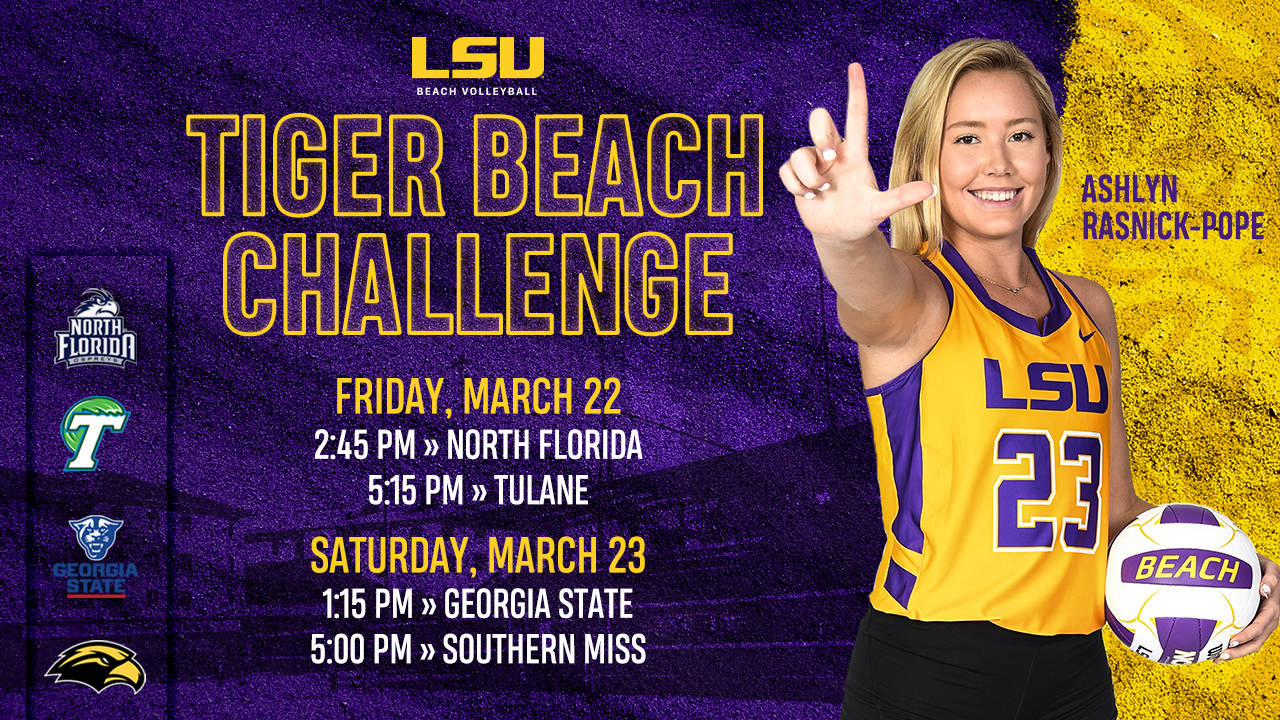 BATON ROUGE – The No. 4 LSU Beach Volleyball team (9-4) will welcome five teams to Baton Rouge on Friday and Saturday for the Tiger Beach Challenge.

The Tigers will face North Florida and Tulane (2:45 and 5:15 p.m. CT) on Friday before they take on No. 19 Georgia State and Southern Mississippi (1:15 and 5 p.m.) on Saturday. Spring Hill College will be the other school in attendance.

“Our goal every weekend is to find ways to be better,” said head coach Russell Brock. “We have opponents that come in and deserve our respect and attention. We want to play the best version of our ball that we can play.”

Gates will open at 10 a.m. on Friday and 8:30 a.m. on Saturday, and fans are reminded that the Geaux Clear bag policy will be in effect for all matches. Fans will receive LSU Beach Volleyball flip-flops and towels on Friday and there will be a food truck along with refreshments, including adult beverages, throughout the weekend. The players will sign autographs on Saturday following the matches.

Cox Sports Television will broadcast both of LSU’s matches on Friday along with the Southern Miss. Vs. Tulane match at 11 a.m. Lyn Rollins will be on the call, joined by Andrew Beyer on color and Carley McCord on the sideline. Cox will broadcast Court 1 and Court 4 for all three of the matchups.

“We’re honored, proud and we’re excited,” said Brock of having Cox Sports coverage on Friday. “We can’t wait to step into that arena.”

After hosting the first competition in LSU Beach Volleyball Stadium last Friday against Coastal Carolina, the Tigers will host their first round-robin type tournament this weekend in their new facility.

The Tigers are a combined 14-11 against their opponents this weekend with a six-match win streak over Tulane, including the first weekend of the season when LSU swept the Green Wave in Tallahassee. Southern Mississippi is in its first year as a program.

The junior pair of Claire Coppola and Kristen Nuss will look to make history this weekend when they step onto Court 1. Coppola and Nuss currently sit tied at the No. 3 spot on LSU’s all-time individual win’s list with 69 victories. They have competed in every match together at LSU and hold the record for most wins as a pair.

With four wins this weekend, Coppola and Nuss will tie current assistant coach Cati Leak for second on the list. Leak was named the assistant coach over the past offseason after she had been a member of LSU’s inaugural beach team and a part of the first LSU team to go to the NCAA Beach Championship in 2017. Leak amassed 73 wins during her playing career from 2014-2017.