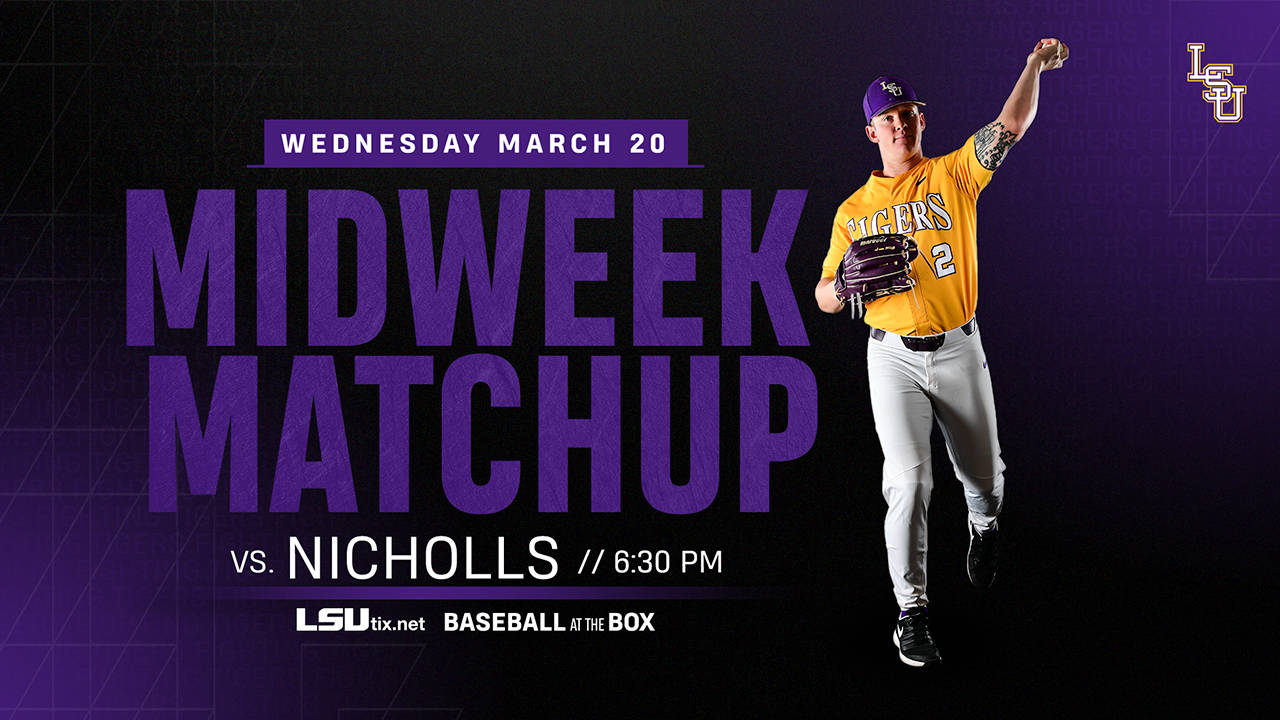 SERIES RECORD VS. NICHOLLS
LSU leads the all-time series with Nicholls, 54-23, including a 10-1 win for the Tigers over the Colonels last season in Baton Rouge. The Tigers have won 27 of the last 29 meetings with the Colonels. Nicholls’ only wins in its last 29 games versus LSU were a 6-3 victory on February 18, 2015, and a 3-1 win over the Tigers on April 15, 2009 – both of those Colonels wins occurred in Alex Box Stadium, Skip Bertman Field.

QUOTING PAUL MAINIERI
“We have a very big challenge staring us in the face on Wednesday night. I’ve watched Nicholls play on television a couple of times, and they have an excellent ball club. I was very proud of the way our players performed last week to win the first four games of this homestand, and we’re hoping to play well enough on Wednesday to finish the homestand on a high note before hitting the road to Georgia this weekend.”

ABOUT THE TIGERS
• LSU has won four straight games, including a three-game sweep of Kentucky to start Southeastern Conference action … the LSU pitching staff posted a 2.10 ERA in the Kentucky series, limiting the Wildcats to seven runs with 34 strikeouts in 30 innings of work … in Saturday’s doubleheader of UK – which included a 12-inning victory in Game 1 — the Tigers used just four pitchers over a total of 21 innings, as Zack Hess, Devin Fontenot, Cole Henry and Trent Vietmeier contributed to the wins
• Senior rightfielder Antoine Duplantis increased his career hits total to 295, just 57 shy of the SEC record of 352 held by former LSU first baseman Eddy Furniss (1995-98) … Duplantis collected one triple, one homer, six RBI and five runs in the Tigers’ five games last week
• Junior centerfielder Zach Watson enjoyed a phenomenal week, batting .619 (13-for-21) in five games with two doubles, two homers, nine RBI and 11 runs scored … in LSU’s three-game SEC series sweep of Kentucky, Watson hit .615 (8-for-13) with one double, one homer, six RBI and eight runs scored … in LSU’s Game 2 win over Kentucky, he tied his career high with four hits, as he was 4-for-4 at the plate with one double, one homer, five RBI and four runs … Watson raised his team-high cumulative batting average to .403 (31-for-77) with eight doubles, two homers, 18 RBI and 25 runs
• Sophomore leftfielder Daniel Cabrera hit .450 (9-for-20) in five games last week with two doubles, one triple, four RBI and four runs scored
• Sophomore right-hander Devin Fontenot recorded a brilliant relief outing to earn the win in Game 1 of the Kentucky series … Fontenot worked the final five innings of the 12-inning game, limiting the Wildcats to no runs on two hits with no walks and five strikeouts
• Junior right-hander Matthew Beck earned a relief win in Game 3 of the Kentucky series, blanking the Wildcats over 2.1 innings with no hits, one walk and three strikeouts … sophomore right-hander Trent Vietmeier fired a career-high six strikeouts and earned his first career save, as he worked the final four innings of Saturday’s Game 2 win over Kentucky
• The Tigers have seven come-from-behind wins this season … LSU is outscoring its opponents 35-7 in the first inning and 27-1 in the fifth inning … the Tigers are 10-4 when scoring first in game … LSU is 10-1 in games in which it hits at least one home run, and the Tigers are 5-4 in games without a homer

ABOUT THE COLONELS
• Nicholls is 11-10 overall this season, and the Colonels are 3-3 in Southland Conference action … Nicholls dropped two of three games last weekend at Central Arkansas in an SLC series
• The Colonels are led at the plate by senior infielder Brady Bell, who is hitting .346 with two doubles, one homer and 13 RBI … sophomore outfielder Dane Simon is hitting .309 with two doubles, two triples, two homers and 13 RBI, and sophomore outfielder/first baseman Austin France has a team-high 19 RBI while batting .309 with four doubles, one triple, two homers and 19 RBI
• Nicholls is hitting .267 as a team with 10 home runs, and the Colonels have 20 stolen bases in 31 attempts …the Colonels’ team ERA is 3.13, and the Nicholls staff is limiting opponents to a .232 cumulative batting average