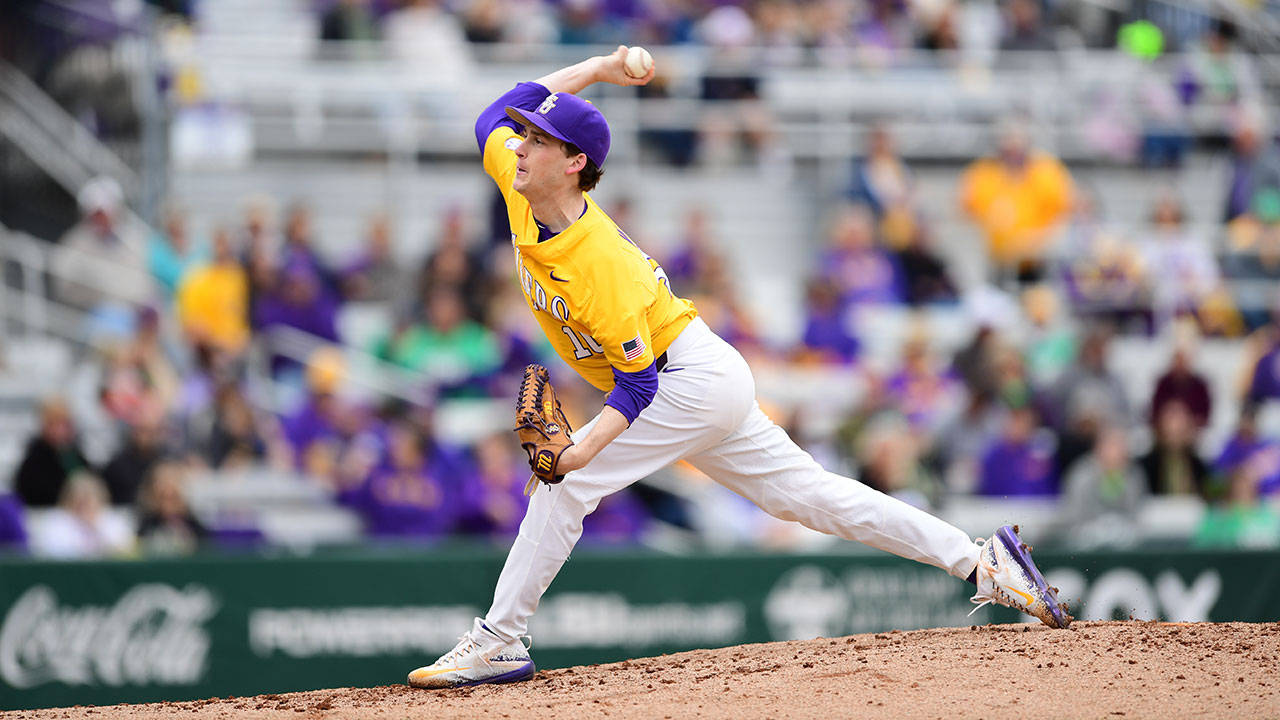 LSU will return to action with a midweek game against Nicholls Wednesday at 6:30 p.m. CT in The Box. The game will be online only through the SEC Network+. Fans can listen to the game on the LSU Sports Radio Network.

LSU starter Eric Walker allowed one run on three hits and struck out five in 4.1 innings. Matthew Beck (2-0) earned the win for the tigers after blanking Kentucky over 2.1 innings, walking one and striking out three. Ma’Khail Hilliard allowed one run on one hit, walked two and struck out one, and Todd Peterson closed it out, working 1.1 innings, walking one and striking out two.

“Eric’s fastball command has been really good,” said LSU assistant coach Nolan Cain. “He was spotting the fastball, getting some swing-and-misses by elevating the fastball when hitters were expecting a breaking ball or a change-up.

“Beck has one of those fastballs that hitters don’t see very well,” Cain said. “He’s got a lot of deception in his delivery, he stands 6-7, so there’s a lot coming at the hitters. The biggest thing about Matthew is that he competes and you feel really good when the ball is in his hand.”

Kentucky southpaw Dillon Marsh allowed one run on two hits, walked two and struck out five in his 3.1-inning start. Right-hander Hunter Rigsby (0-1) suffered the loss after allowing three runs on three hits. He did not record an out.

Third baseman Chris Reid led off the bottom of the fourth inning with a single to right field and advanced to third on a fielding error by the second baseman, which put runners on the corners for the Tigers. Designated hitter Saul Garza dropped a single into center field, which drove in Reid and gave LSU the 1-0 lead.

In the top of the fifth inning, third baseman Coltyn Kessler and shortstop Austin Schultz ripped back-to-back base hits and moved to scoring position on a sacrifice bunt. With one out catcher Marshall Gei squared around to bunt, and Kessler scored on the safety squeeze to tie the game, 1-1.

The Tigers opened the bottom of the fifth inning with three consecutive base hits. When center fielder Zach Watson ripped the third base hit to left field, it allowed second baseman Brandt Broussard to score. A sacrifice bunt put runners in scoring position, Reid drove in shortstop Josh Smith and Watson to propel LSU to the 4-1 lead.

A walk from Smith and a single by Watson put runners on first and second in the bottom of the seventh inning. A wild pitch moved the pair into scoring position, and right fielder Antoine Duplantis smoked a triple off the right field wall to plate Watson and Smith.

“That was a really big at-bat for Antoine,” Cain said. “We were thinking about possibly bunting there, but Antoine hits a ball off the wall, and if the wind is not blowing in, that’s his sixth homer of the season. The thing about Antoine is that he’s going to have deep at-bats, and once he sees a pitch a couple of times, he’s going to be on it.”

Duplantis scored on a groundout by left fielder Daniel Cabrera to wrap up the inning with the 7-1 LSU lead.

With two outs in the top of the eighth inning designated hitter T.J. Collett hit a solo shot to right field to cut the LSU lead to 7-2.