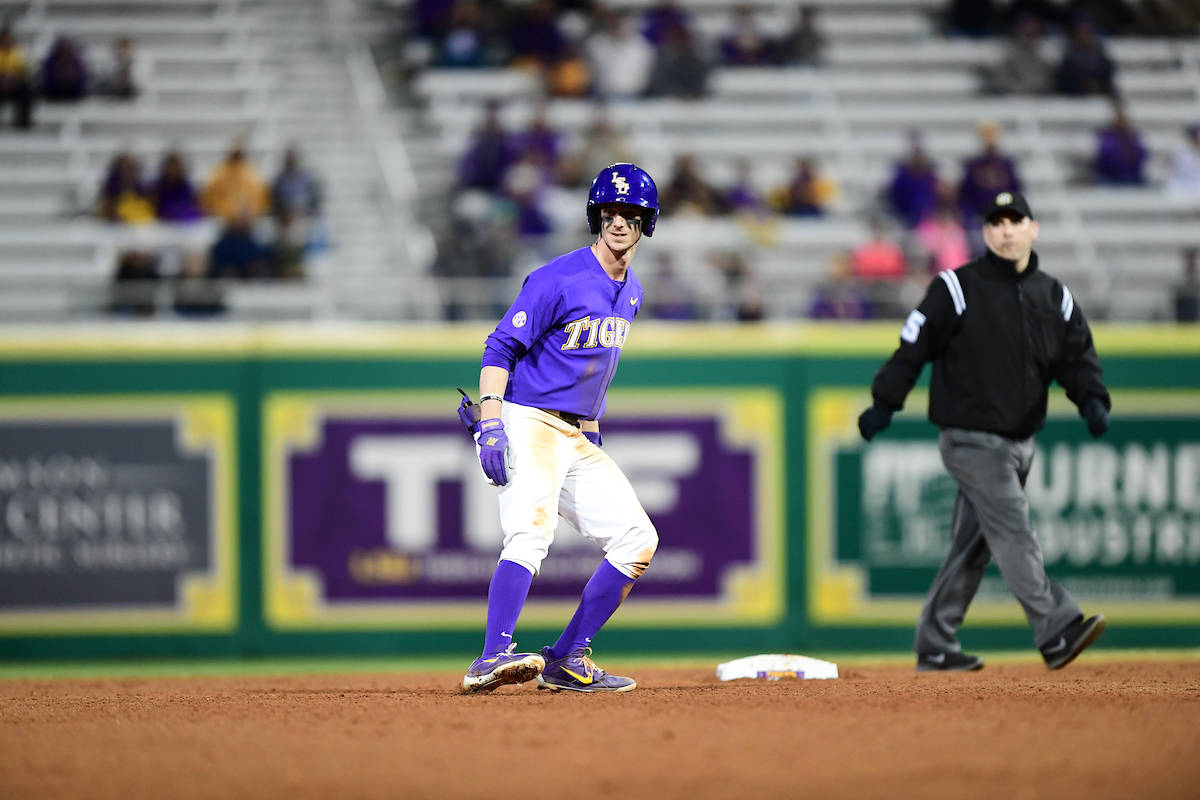 The Tigers secured Game 1 in walk-off walk fashion with a 2-1 victory before the offense exploded for a 16-3 win in Game 2 to get the series victory.

The series finale between LSU and Kentucky is slated for 2 p.m. CT Sunday in The Box. The game will be online only through the SEC Network+. Fans can listen to the game on the LSU Sports Radio Network. Right-hander Eric Walker will start on the game for the Tigers, while Kentucky’s starter has yet to be announced.

“The key to the wins today was the fact that we played 21 innings and we only had to use four pitchers,” said LSU coach Paul Mainieri. “We’re a little thin in our pitching staff right now, so it was imperative that we were able to keep arms available for Sunday’s game. Hopefully, we have enough pitching to get us through Sunday and we’re as successful as we were today.”

Game 1
Freshman Giovanni DiGiacomo entered to pinch hit with one out and the bases loaded in the bottom of the 12th inning and drew a walk to bring in center fielder Zach Watson as the No. 10 LSU baseball team defeated Kentucky in walk-off fashion to claim the series opener, 2-1.

The 12th inning rally was started by Watson who singled through the left side to open the inning. With one out, third baseman Chris Reid slapped a single to left field and moved to second on a fielding error to put runners in scoring position. Kentucky elected to intentionally walk left fielder Daniel Cabrera to load the bases for DiGiacomo.

Zack Hess was brilliant, limiting Kentucky to one run on four hits, walked six and struck out six in seven innings. The Tigers turned the ball over to Devin Fontenot (3-0), who was dominant in his five-shutout innings. The sophomore tied his career-high with five strikeouts and limited the Wildcats to two hits.

“Fontenot was terrific today,” Mainieri said. “That’s two weeks in a row he’s been a man out there, and I was very glad to see it for our team’s sake.”

Right-hander Trip Lockhart (0-1) suffered the loss after allowing one run on two hits and walked one in 1.1 innings. Kentucky starter Zach Thompson blanked LSU in his six innings of work. He allowed four hits, walked two and struck out nine.

Left fielder Breydon Daniel led off the top of the first inning with a walk before he stole second. Back-to-back singles by right fielder Ryan Shinn and designated hitter T.J. Collett allowed Daniel to score to give Kentucky the 1-0 lead.

Watson singled to center field to lead off the bottom of the eighth inning and moved to second on a wild pitch. With one out, the Tigers drew back-to-back walks from Reid and Cabrera. Freshman designated hitter Drew Bianco worked a walk to bring in Watson and tie the game, 1-1.

Game 2
Zach Watson went 4-for-4 and was a triple shy of the cycle with five RBI to lead the Tiger offense which roared to a 16-3 victory against Kentucky in Game 2 Saturday night to take the series against the Wildcats.

“Zach is such a great athlete and he can be an electric player,” Mainieri said. “He’s got all the skills that you need, when he puts it together, he can dominate a game like he did today.”

Trent Vietmeier was excellent out of the bullpen for LSU and earned his first save of the season, limiting the Wildcats to one run over three innings of work with five hits, one walk and a career-high with five strikeouts.

In the bottom of the first inning, center fielder Zach Watson singled to left field with one out and moved to second on a wild pitch. After right fielder Antoine Duplantis was hit by a pitch, third baseman Chris Reid doubled down the left field line to drive in two runs and give LSU the 2-0 lead.

“Chris Reid continues to play as well as anyone on our team,” Mainieri said. “He’s been such a tremendous leader – it’s so wonderful to see a kid like Chris have the success he’s having.”

Kentucky first baseman Dalton Reed singled to right field and catcher Coltyn Kessler drew a walk to open the top of the second inning. Reed and Kessler moved to scoring position on a ground ball, and Reed scored to cut LSU’s lead to 2-1 on a fielder’s choice.

The Tigers put up six runs in the bottom of the second inning to jump out to the 8-1 lead. Designated hitter Giovanni DiGiacomo singled through the right side to start the inning. There were Tigers in scoring position after catcher Brock Mathis drew a walk and a sac bunt by second baseman Hal Hughes moved the runners. Shortstop Josh Smith was hit by a pitch to load the bases. Watson sent a fly ball to right field for a sacrifice fly that drove in DiGiacomo. A fielder’s choice allowed Mathis to score in the next at-bat. Reid was hit by a pitch to re-load the bases and three consecutive singles from left fielder Daniel Cabrera, first baseman Cade Beloso and DiGiacomo brought in four runs to wrap up the inning.

With two outs in the bottom of the third, Watson hit a frozen rope single to left field, advanced on a fielder’s choice, moved to third after a walk and scored after reading a breaking ball in the dirt to give LSU the 9-1 lead on the wild pitch.

Kentucky responded in the fourth when shortstop Austin Schultz pelted a one-out double to right field and moved to third on a wild pitch. With runners on the corners pinch hitter Elliott Curtis singled to left field, and center fielder Cam Hill touched home on a wild pitch after drawing a walk and moving to third after a walk to cut LSU’s lead to 9-3.

Beloso led off the bottom of the fourth inning with a single to right field, and DiGiacomo reached on a fielding error by the shortstop. The freshmen advanced to scoring position on a sacrifice bunt, and a walk by Hughes loaded the bases. Smith drew a bases loaded walk to bring in Beloso, and a wild pitch brought in DiGiacomo. For the second time this week, Watson crushed a ball over the wall in left field. This time, it was a three-run blast to put the Tigers up 14-3.

In the bottom of the sixth inning, Smith drew a leadoff walk and scored on Watson’s double to left field. With Watson on third after a wild pitch, pinch hitter Brandt Broussard hit a RBI groundout to shortstop to give LSU the 16-3 lead.

A RBI single by Schultz allowed Reed to score with two outs in the bottom of the ninth inning after Reed singled to center field earlier in the inning. The score was finalized at 16-4 LSU.