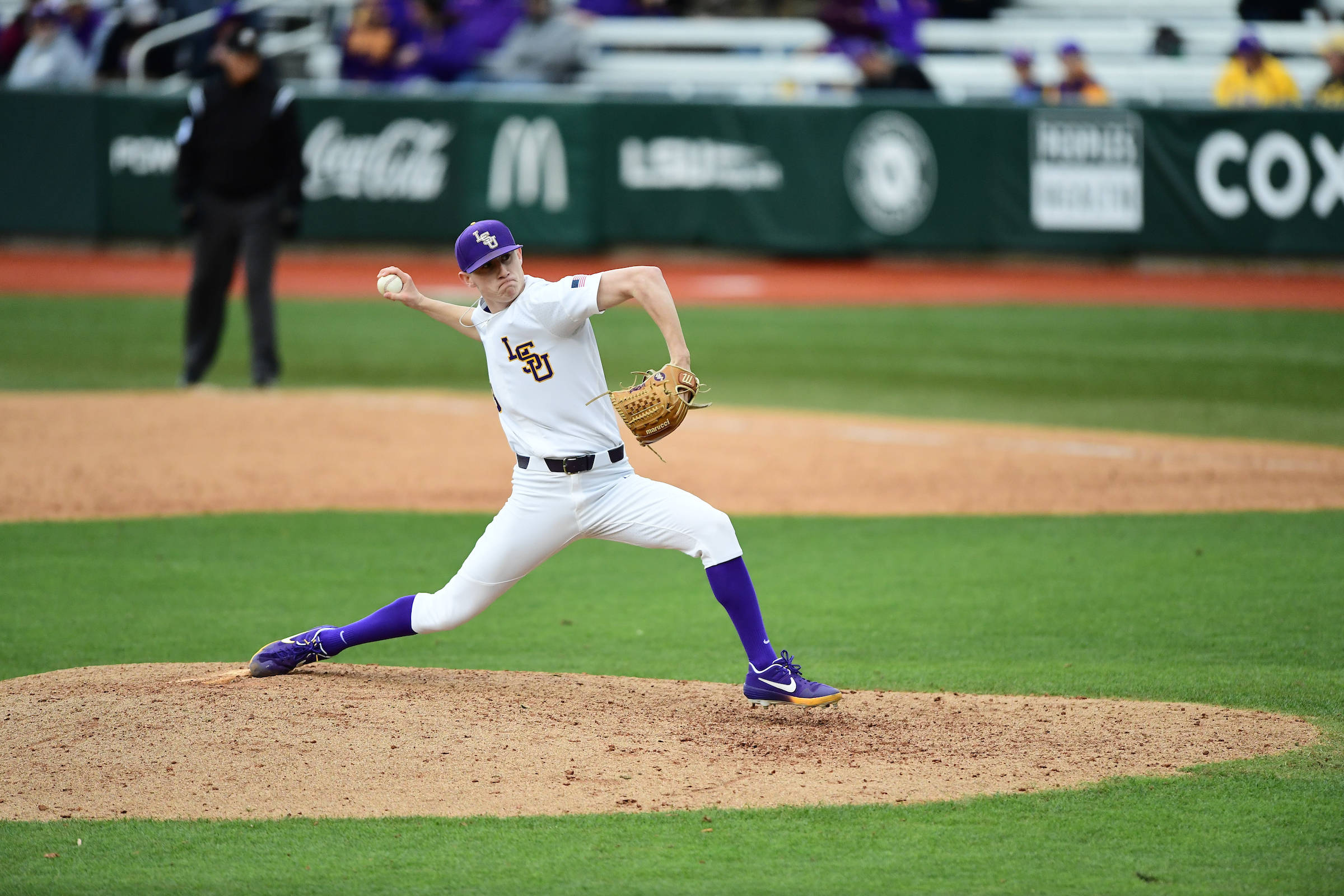 Every pitcher needs a short memory. In Devin Fontenot‘s case, forgetting may be the best weapon in his arsenal, even more than his tailing two-seamer and his slippery slider.

After all, it was just over a week ago when Fontenot left the eighth inning of LSU’s 4-3 win over California after facing just two batters, Paul Mainieri‘s anger chasing him from the mound nine pitches after he first toed it.

Mainieri would later tell Fontenot it was among the hardest challenges he’d ever issued a player.

Since, Fontenot’s thrown nine scoreless innings, including five crucial ones Saturday in LSU’s 2-1 win over Kentucky to open SEC play on a winning note. Against the Wildcats, he was dominant, striking out five and giving up just two hits in relief of Zack Hess.

It was the second straight outstanding outing from Fontenot, who also threw four shutout innings against California on Sunday.

“I gained a lot of confidence from that last (California) game,” Fontenot said, “and I just went out there today and just wanted to throw one strike at a time and help the team the best way I can.”

The sophomore @Fontenot_28
painted the plate for the first out of the inning.

For Mainieri, it’s been the fulfilment of a potential he’s seen in Fontenot since he arrived on campus last fall. When he jumped on his sophomore pitcher last Friday, it wasn’t to belittle or humiliate him.

Instead, it was to show him he had much more to offer than what he’d given LSU in that outing.

“He’s got a lot of ability,” Mainieri said of Fontenot. “What I tried to do was make him understand how much ability he actually he has. The one thing in my 37 years of coaching I’ve had the most difficult time accepting is kids that have a chance to be great but don’t want to push themselves to that level. That’s what teachers and coaches are supposed to do, somehow, some way, get a youngster to realize what their potential is and fulfil that potential.”

Mainieri compared Fontenot to Todd Peterson last season: a player who didn’t maximize his talents early in his career but, after some hard coaching, started to realize what he was capable of.

Since those nine quick pitches against Cal, Fontenot has picked up two wins and seen his ERA drop from 3.86 to 1.69.

“I think Devin Fontenot has a chance to be a really great pitcher,” Mainieri said. He has a lot of qualities about him that lend toward him being a really outstanding pitcher that could take this game a long way. I don’t know if me challenging him made him realize that. I hope so. I’m sure he got a lot of loving support from his parents, friends, teammates, and everyone else. They were all giving him the same message, maybe in a little bit nicer way than I did that particular night.”

For Fontenot, the flip has switched – so much so that he says he doesn’t really remember all that much from before Mainieri’s lashing.

“Oh yeah, oh yeah,” Fontenot said, when asked if that was a turning point for him. “I can’t hardly remember anything before that point this season. I’m just focused on one game at a time from now on. Don’t worry about what happened back then. Just keep moving forward.”

As Fontenot is peaking, so is the staff. Hess also enjoyed his best outing of the night, working out of a first inning jam to throw seven innings of one-run ball. The junior walked six and gave up four hits while throwing 118 pitches, but after his Friday night start was postponed due to rain, Hess felt he could’ve thrown all day Saturday.

“I feel like I could go out there for a couple more hours,” said Hess. “I had an extra day’s rest with last night’s game being rained out, and I felt good the whole time. It’s a good way to start off SEC play.”

The game didn’t start as smoothly as it finished for Hess. For the second straight start, he nearly dug himself a hole of dire depths, walking the game’s first hitter and giving up a run before registering an out. From there, however, LSU’s ace settled in, inducing a groundout before getting his first strikeout of the night and getting a flyout to end the threat.

That rocky start came a week after he allowed a leadoff home run to Cal and let two Bears on base before pitching out of trouble and finding a rhythm the rest of the night. Despite his last two starts seeing less than comfortable first innings, Hess has a 2.13 ERA in 12.2 innings in those games.

“I was joking around in the dugout,” Hess said after the game, “if I could just throw the first inning in the bullpen then come into the game after that, that would be nice.”

Fontenot, meanwhile, went extended innings for the second straight appearance. A year ago, he averaged just over 1.1 innings in 29 appearances, but he’s thrown exactly 60 pitches in each of his last two relief efforts.

“I knew (Mainieri) had confidence in me,” Fontenot said. “I knew he knew I felt good. I’m just going to keep going out there and getting one out at a time and doing the best I could.”

That’s all Mainieri asked for – nicely or not.

“I couldn’t tell you how proud I am of him,” Mainieri said of Fontenot. “What he’s done now, two weeks in a row, he’s just been our hero. It warms my heart to see a youngster start to push himself.”