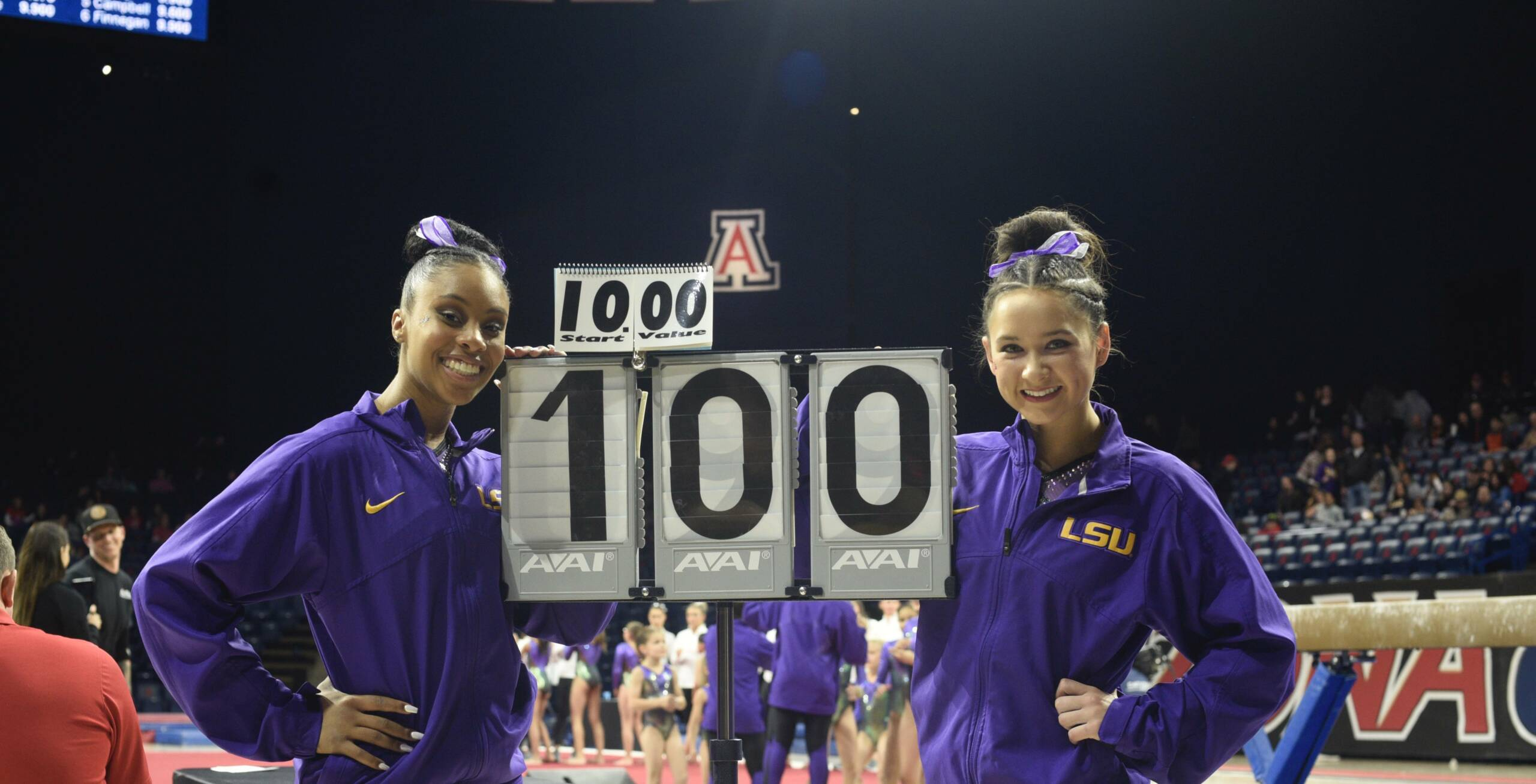 TUCSON, Ariz. – A pair of perfect scores by senior Sarah Finnegan and junior Kennedi Edney led LSU to the highest away score in school history, a season-high 198.175, and win over Arizona Friday night inside the McKale Center.

The Tigers completed the regular season with a record of 11-3. With the win, LSU improved its NQS to 197.680. The Tigers have officially secured the top seed at the SEC Championships for a third-straight season.

Finnegan earned the fifth perfect score of her career and Edney scored the second of her career. LSU gymnasts Finnegan, Edney, Lexie Priessman and McKenna Kelley are the only gymnasts in the SEC to score a perfect 10.

Finnegan and Edney totaled scores of 39.725 in the all-around. Finnegan has won the all-around title in 11 of 12 meets and tied Susan Jackson for the most all-around wins in a single season in school history.

“Our goal was to come here tonight and be consistent,” LSU gymnastics head coach D-D Breaux said. “Momentum has been a critical part of what this team has tried to build since the halfway point in the season. It was our expressed goal to come here and continue the momentum. This team did a fabulous job of a cohesive team effort and they were rewarded for it.”

Finnegan Anchors Strong Bars Rotation
LSU opened the night with a 49.600 on bars for the highest in an away meet and fifth-highest score in school history. The squad opened with scores of 9.875 from the first four performers – Sami Durante, Bailey Ferrer, Ruby Harrold and Edney. Priessman scored a near-perfect 9.975. Finnegan then closed out with her second career 10 on bars.

Vault Continues Hot Start
The Tigers continued their strong start with a 49.650 on vault for the highest in an away meet on the event and second-highest overall vault score in school history. Finnegan opened with a 9.875 and she was followed by a career-high 9.95 from Harrold. Kelley scored a 9.90 and Edwards matched her career high with a 9.95. Edney closed the second rotation with her first career 10 on vault.

Trio Leads Third Rotation
Harrold opened with a 9.825 for the squad. In her first career performance on floor, sophomore Bridget Dean scored a 9.80. Edney, Finnegan and Kelley wrapped up the third rotation with scores of 9.95 to lead LSU to a 49.475.

Beam Seals Historic Night
LSU closed the night with a 49.425 on beam, highlighted by 9.90 scores from Durante, Edney and Finnegan to take the titles. Dean matched her career high with a 9.875 and Desiderio opened things off with a 9.85.

Next Up
LSU, the No. 1 seed, will begin its championship season with the 2019 SEC Championships at 7 p.m. CT Saturday, March 23. The meet will be held at the Smoothie King Center in New Orleans. It will mark the first SEC Championships in the state of Louisiana since 1998.