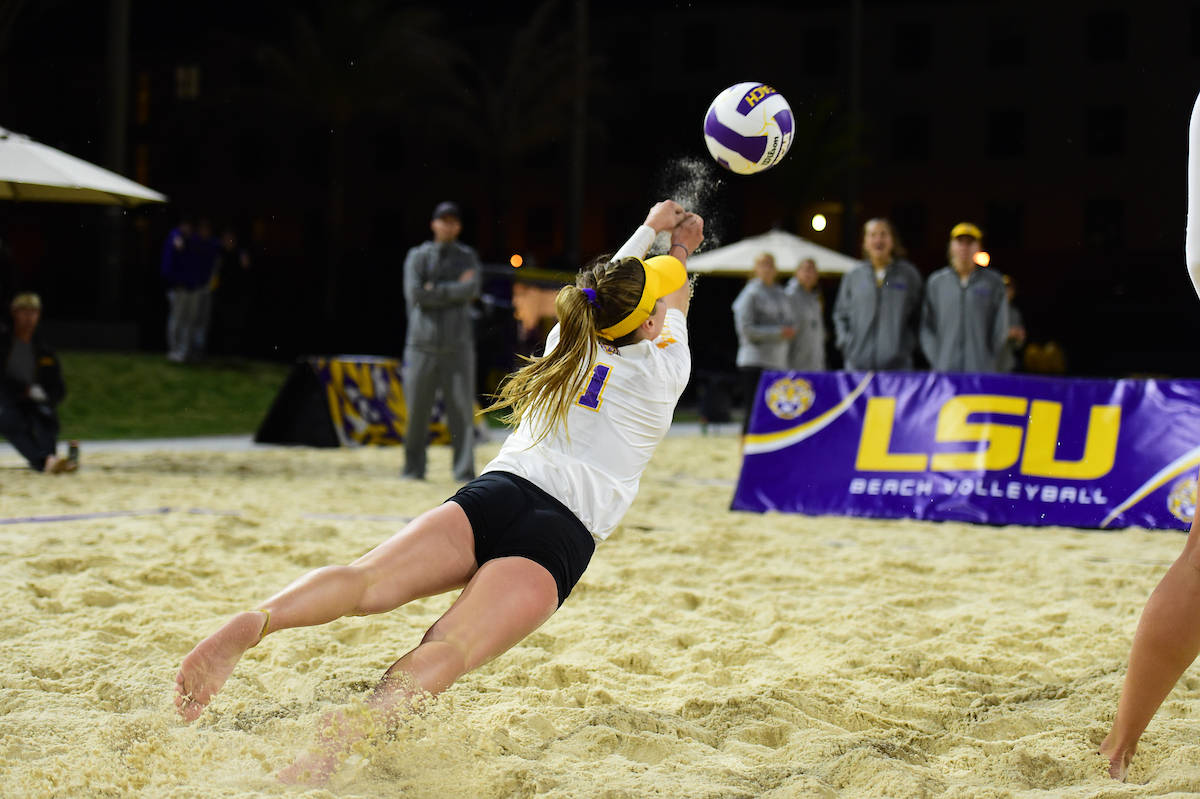 BATON ROUGE – In front of over 550 fans, the No. 4 LSU Beach Volleyball team opened its brand new stadium with a 5-0 sweep over Coastal Carolina Friday night.

“We’ve been thinking about this night to be able to play in front of the fans here on campus for awhile,” said head coach Russell Brock. “Hearing that fight song and being able to show what we’ve been working on – it could not have been a better arrangement.”

Despite off and on rain throughout the evening, the long awaited first match inside LSU Beach Volleyball Stadium was a success when the Tigers notched their second sweep of the 2019 campaign.

“It was not the most ideal weather situation, but it was super nice,” said junior Kristen Nuss. “We’ve been looking forward to this moment for a long time and for it to actually happen, it was surreal.”

“For it to be our first home match,” said graduate transfer Taryn Kloth, “and have so many fans in the cold weather – it was amazing.”

After playing its first five seasons at an off-campus beach volleyball venue in Baton Rouge, LSU opened a State-of-the-Art beach volleyball stadium in the heart of campus in January. Tonight was the first on-campus match in program history and the Tigers did not disappoint, sweeping Coastal Carolina, 5-0.

LSU began the sweep on Court 5 when sophomore Hunter Domanski and freshman Allison Coens earned a straight-set victory, 23-21 and 21-12.

Coastal Carolina put up a fight on Court 4. Graduate transfer Taryn Kloth and freshman Kelli Agnew dropped the first set in dramatic fashion, 25-23. The LSU duo responded in the second set with a 21-16 victory to force a third set. Kloth and Agnew finished the job with a 15-12 set three win.

Junior Olivia Powers and freshman Ashlyn Rasnick-Pope kept the sweep going for LSU on Court 2 when they earned yet another straight-set victory for the Tigers, 21-11 and 21-17. Immediately following, seniors Toni Rodriguez and Ashley Allmer finished off the sweep when they went 21-17 and 21-14 on Court 3.

The Tigers will host North Florida, Tulane, Georgia State, and Southern Mississippi March 22 and 23 for the Tiger Beach Challenge.