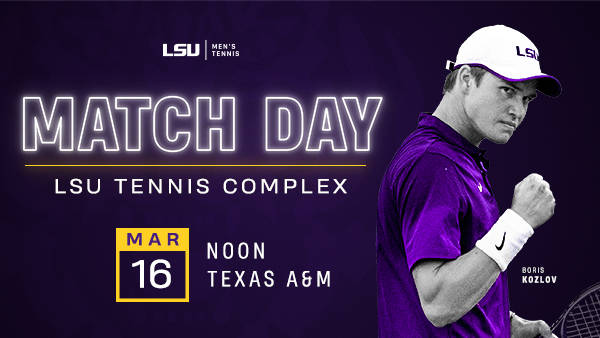 Admission to all matches in the LSU Tennis Complex is free. Fans can follow the match at www.LSUstats.com and on Twitter @LSUtennis. The match also can be streamed online at LSUsports.net/tennisvideo.

Thoughts from the Co-Head Coach Chris Brandi
“After an emotional win last night, we need to bounce back quickly against the Aggies who are one of the top teams in the country and just beat No. 1 Ohio State. This is a great opportunity for us to see where we are at against one of the best out there.”

The Matchup
Texas A&M has the overall 29-20 advantage in the matchup. Last season the teams met twice, and the Aggies swept the Tigers in both matches.

Boris Kozlov was the star of the night in Thursday’s match against Old Dominion. The freshman clinched his court four match to propel the Tigers to the 4-3 victory. Kozlov now has 11 wins on the dual season, which is third on the team behind Malik Bhatnagar and Joey Thomas‘ 12 wins.

Shane Monroe is the No. 112 singles player in the nation, and court one pair Rafael Wagner and Thomas are the No. 43 duo.

The Aggies are led by No. 38 Valentin Vacherot and No. 58 Barnaby Smith, who play courts three and four, respectively. Hady Habib is ranked No. 120. Smith has 18 wins, which is a team-high while Vacherot has a 13-5 record.