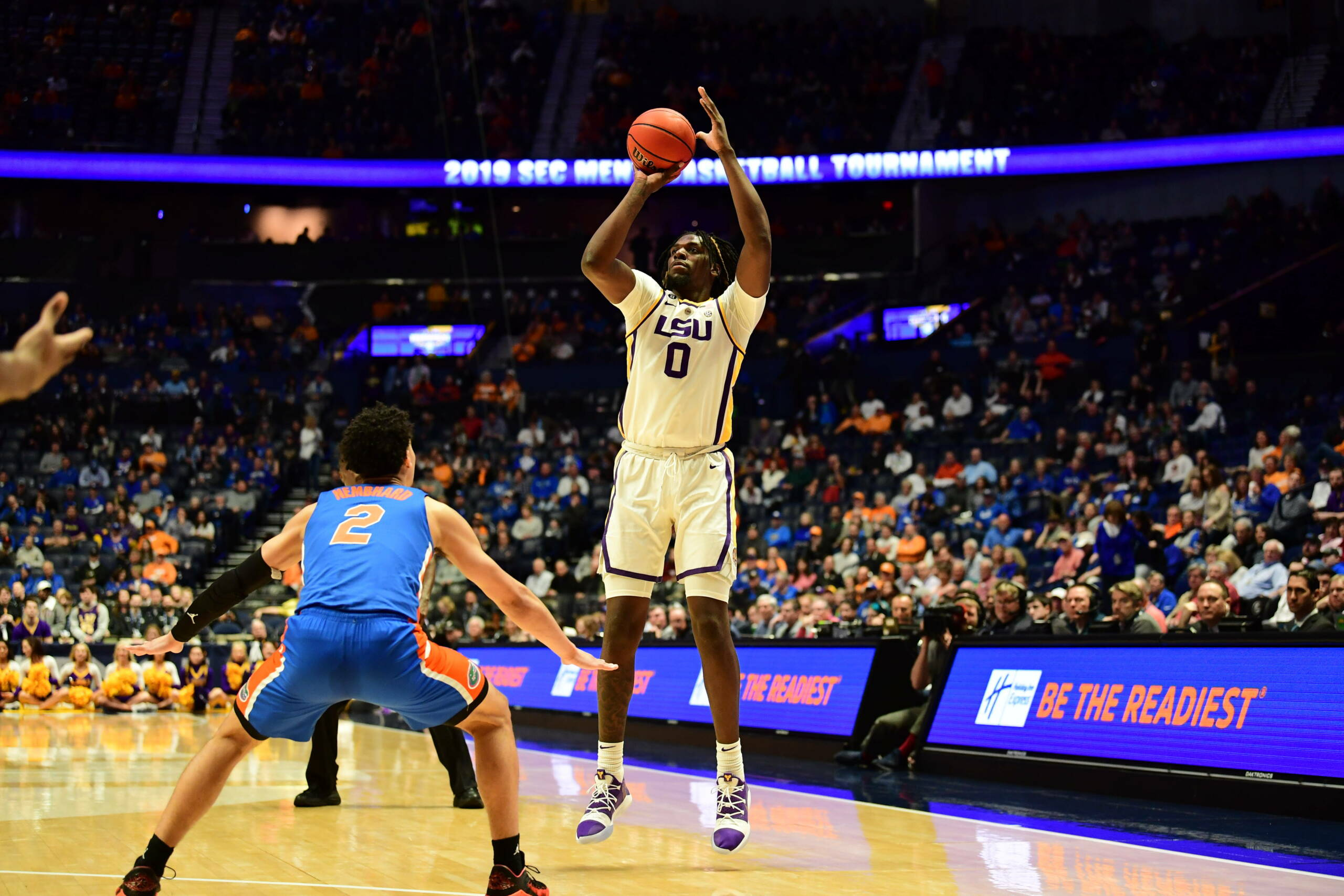 NASHVILLE, Tenn. — Florida’s Andrew Nembhard made a three pointer with 1.2 seconds to play, as the Gators eliminated top-seeded LSU in the quarterfinal round of the SEC Men’s Basketball Tournament, 76-73, on Friday afternoon at Bridgestone Arena.

LSU (26-6), which claimed the league’s regular-season title and the tournament’s No. 1 seed, await and NCAA Tournament berth which will be announced on Selection Sunday beginning at 5 p.m. CT on CBS.

Florida (19-14) flipped a three-point deficit to a three-point lead with 3:45 to play, as the Gators benefited from a six-point trip down the court that included a three pointer and three free throws.

The Gators advanced to face the winner of No. 4 South Carolina and No. 5 Auburn.

Freshman forward Naz Reid led LSU with 26 points on 11-of-20 shooting along with 14 rebounds. Javonte Smart added 13 points, while Tremont Waters had nine and Kavell Bigby-Williams had eight points and 11 rebounds before fouling out.

Florida made 16-of-26 free throws, while LSU didn’t attempt one until the second half and finished 7 of 11. LSU was whistled for 24 fouls, Florida 10.

After learning Smart was cleared on the short bus ride to the arena, the Tigers came out of the lockerrom on team. With the game tied at 5-5 early, LSU scored eight-straight from close range including dunks by Taylor, Waters and Bigby-Williams.

Smart came off the bench with 14:12. LSU extended its first-half advantage to double figures, 22-9, on a long three-pointer from the top of the key and Smart’s short jumper with 9:50 remaining in the half. Florida was unable to get closer than eight points for the duration of the half.

LSU took a 35-25 advantage to the lockerroom after shooting 53.3 percent from the field. The Tigers had 13 of its 16 buckets from inside the paint. Meanwhile, Florida was held to 10-of-29 shooting (34.5 percent) including 2-of-15 from three-point range.

While LSU didn’t attempt a first-half free throw for the first time in two seasons, Florida made only 3-of-8 from the line in the opening stanza.

Florida made nine-straight field goals to cut a 42-29 deficit to one point, 53-52, midway through the second half.

The Gators missed two three pointers but then took their first lead of the game, 58-57, with a pair of free throws by Jalen Hudson with 6:05 remaining.

However, Reid answered with a dunk and Skylar Mays broke out of an 0-for-8 shooting slump with a layup kissed above the square on the backboard for a 61-58 lead. Florida called timeout with 4:27 to play.

With the Tigers ahead 63-60 on a monster dunk by Mays, Florida benefited from a six-point trip down the court. Florida’s Johnson tied the game with a three-pointer, which was ruled to count though Reid was charged with a foul while fighting through a screen well before the shot.

LSU Interim Head Coach Tony Benford was called for a technical foul following a dramatic three-point gesture by the official. Florida made the two technical free throws and 1-of-2 for the double-bonus foul to lead 66-63.

The Tigers fought back to lead 67-66 with a pair of free throws by Waters and a layup by Mays off a steal by Waters. However, Florida made consecutive baskets to again lead by three, 70-67.

Reid made another three pointer with 13.5 seconds to play, again tying the game, 73-73.

After a timeout, Florida ran the clock under three seconds before Nembhard made a three pointer from the top of the key with 1.2 seconds to play. A length-of-the court pass from Will Reese to Reid was unable to be handled as the clock expired.