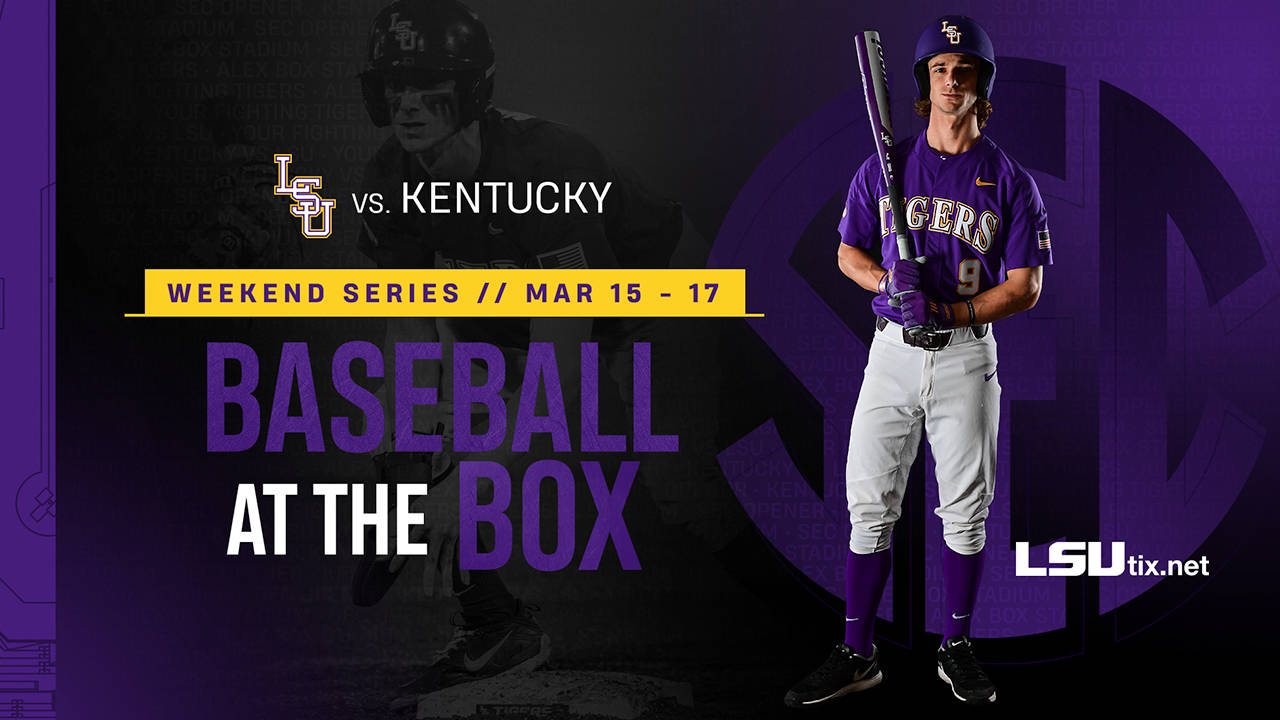 RADIO
LSU Sports Radio Network affiliates, including WDGL 98.1 FM in Baton Rouge
(Sunday’s game will be on 100.7 FM in Baton Rouge, if the LSU men’s basketball team is playing in championship game of SEC Tournament)
Live audio at www.LSUsports.net/live
Live stats at www.LSUstats.com

ONLINE
All three games of the series will be available on SEC Network+ and the WatchESPN app.

SERIES RECORD VS. KENTUCKY
LSU leads the all-time series with Kentucky, 49-29-1, and the teams last met in 2017, when UK won two of three regular-season games in Lexington, and LSU posted a victory over the Wildcats in the SEC Tournament in Hoover, Ala. The Tigers have won 11 of their last 17 SEC series with the Wildcats; however, UK has won the last two series – 2017 in Lexington and 2015 in Baton Rouge.

ABOUT THE TIGERS
• LSU has won an SEC-high 17 league titles, including four under current coach Paul Mainieri (2009, 2012, 2015, 2017)
• Senior rightfielder Antoine Duplantis has performed brilliantly this season, batting .368 (25-for-68) with two doubles, five homers, 27 RBI and 17 runs … Duplantis has 293 career hits, just 59 shy of the SEC record of 352 held by former LSU first baseman Eddy Furniss (1995-98) … he entered this season with four career home runs, but has already exceeded that total with five dingers in 2019 … Duplantis is No. 2 in the SEC with 27 RBI, and he is seventh in the league in total bases with 42
• The Tigers have six come-from-behind wins this season … last weekend’s series versus California featured two comeback wins for the Tigers, including a two-run, walk-off single last Friday by junior shortstop Josh Smith to lift LSU to a 4-3 victory … last Friday’s win was the second walk-off victory of the season – LSU defeated Army, 6-5, on February 16, when freshman first baseman Cade Beloso launched a three-run homer in the bottom of the ninth inning
• LSU is No. 6 in the SEC with a .297 team batting average, and the Tigers are No. 14 in the league in team ERA at 4.83
• Junior shortstop Josh Smith is No. 10 in the SEC in batting average, hitting .397 (23-for-58) with six doubles, one homer and 10 RBI … Smith, the Tigers’ lead-off hitter, is No. 2 in the league in runs scored with 22 … Smith posted a 13-game hit streak from February 16 through March 9
• Junior centerfielder Zach Watson recorded a career-high four hits in Wednesday’s win over Texas Southern … Watson was 4-for-4 at the plate with one double, his first homer of the season, three RBI and three runs scored
• Junior right-hander Zack Hess posted his longest outing of the season last Friday versus California, working 5.2 innings (101 pitches) and limiting the Bears to two earned runs on five hits with three walks and five strikeouts
• Sophomore right-hander Devin Fontenot recorded a brilliant relief effort in Game 2 of last Saturday’s doubleheader versus California, firing four shutout innings to earn the win … Fontenot limited the Bears to two hits with one walk and three strikeouts, firing 60 pitches and improving his record to 2-0 … Fontenot made three appearances last week, allowing no runs on two hits in 5.2 innings with six strikeouts

ABOUT THE WILDCATS
• Kentucky is No. 11 in the SEC in team batting average at .278, but the Wildcats have a league-high 46 stolen bases in 55 attempts.
• UK is also No. 11 in the SEC in team ERA at 4.20 … UK junior left-hander Zack Thompson is third in the SEC with 37 strikeouts … Thompson pitched for the U.S. Collegiate National Team last summer; LSU coach Paul Mainieri was the U.S. team’s head coach
• Senior outfielder Ryan Shinn is batting .368 (21-for-57) for the Wildcats with 10 doubles, three homers and 11 RBI .. Shinn is No. 1 in the SEC in doubles, and he is eighth in the league in slugging percentage (.702) … junior first baseman T.J. Collett is sixth in the SEC with 23 RBI, and he has a team-high five home runs
• Junior infielder/outfielder Breydon Daniel is third in the SEC with 10 steals, and junior outfielder Jaren Shelby is fifth in the league with nine stolen bases.