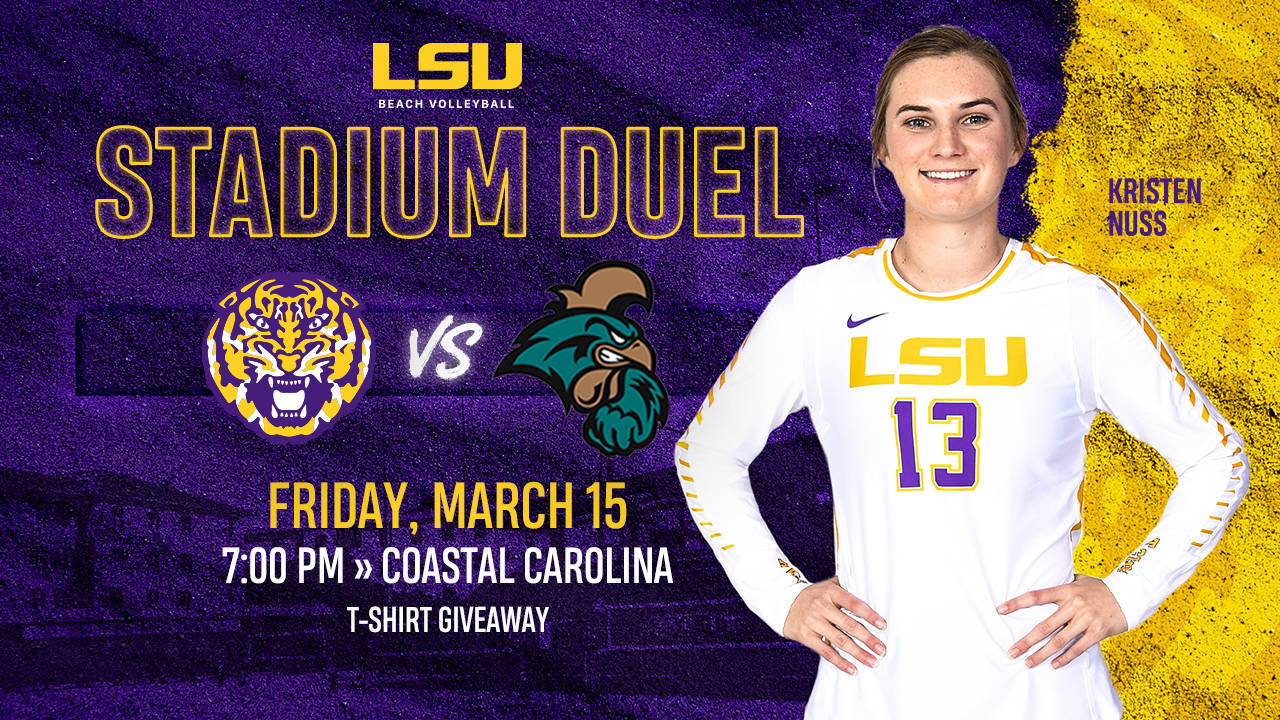 “It’s been years since we’ve been talking about this place and hosting and having people on campus able to be here,” said head coach Russell Brock. “It’s finally here. It’s a lot of fun. We’re really looking forward to it. We couldn’t be more excited.”

Fans not able to be in attendance will be able to watch a live stream of each court online. Scoring updated will be available on twitter throughout the match.

Gates open at 6 p.m. and fans are reminded that Geaux Clear bag policy will be in effect for all matches. Fans will receive a commemorative LSU Beach Volleyball Stadium t-shirt and there will be a food truck along with refreshments, including adult beverages.

Fans coming to Friday’s duel will get a t-shirt commemorating the Inaugural Season of LSU Beach Volleyball Stadium! pic.twitter.com/cSUVeKxXhw

LSU is 8-4 on the season and coastal Carolina is 7-3. The only other time that the two teams have met was back in 2016 when the Tigers swept the Chants, 5-0.

“For us,” Brock explained, “it always comes down to the ability to play on our side of the net the way we know we can.”

After competing in an off-campus beach volleyball venue for the its first five seasons, the LSU Beach Volleyball team will finally have the opportunity to compete in a home of its own on in the heart of LSU’s campus.

“Mango’s was great,” said Brock. “We always had lots of people out there, but this is on campus, with our scoreboard and our colors. Being able to look over and see the natatorium and the track and field and gymnastics – we’re right here with those teams now.”

For the past two seasons LSU has had one of best programs in the nation with twenty-seven wins for two consecutive years and back-to-back appearances at the NCAA Championship as one of the final eight teams. So far the 2019 team is carrying on the tradition of success.

In fact, they’re taking it to new heights. Along with being the first team to play and practice in the state-of-the-art LSU Beach Volleyball Stadium. They have also become the first team to crack the top-five. LSU has been featured in the AVCA Top-10 for 27 straight weeks now, but until it went 4-0 during the first weekend of the season with wins over No. 3 Florida State, No. 6 Cal Poly and No. 9 South Carolina, the Tigers had never been in the top-five.

After one week of missing out of the top-five, the Tigers are back in after they defeated No. 3 Pepperdine and No. 5 Hawaii in California this past weekend.

LSU’s rotation so far this season has featured a mix of tested veterans and impactful newcomers.

The junior pair on Court 1 of Claire Coppola and Kristen Nuss are one of the best duos in the nation and they have been since they were freshmen. The All-America honors, Pair of the Week awards and other accomplishments speak for themselves. They have cemented themselves as an anchor for the Tigers, playing every collegiate match together and earning a 68-17 record in the process.

The Court 5 pair of freshman Allison Coens and sophomore Hunter Domanski have proven to be a lethal duo so far in 2019 earning a 9-3 record up to this point. A mix of pairs have competed at the four spot for LSU and the Tigers have a combined 7-5 record on that flight.

Playing as a pair for the first time together, junior Olivia Powers and freshman Ashlyn Rasnick-Pope have begun to gain a chemistry together on Court 2 that will only continue to grow as the season progresses, On February 23, Powers and Rasnick-Pope swept their match on Court 2 against No. 3 Florida State to clinch the win for LSU.

Similarly, senior Toni Rodriguez and freshman Kelli Agnew are growing strong together on Court 3. The LSU duo was the only pair to earn a court over the past weekend when the Tigers competed against top-ranked UCLA.

Graduate transfer Taryn Kloth and junior Maddie Ligon have competed on the majority of matches on Court 4, going 4-4 together. Kloth is a tall and athletic player who joined the team after a successful indoor career at Creighton in which she was named an All-American. Ligon is quick defender who can bring the power when she attacks the ball. The LSU duo earned a sweep on Court 4 in LSU’s victory over No. 3 Pepperdine last weekend.

Each team consists of five pairs with the top pair being featured on Court 1, the next best duo on Court 2 and so on. To win a match a team must win three courts.

To win a court a team must win two sets. The first two sets go to 21 points with a minimum lead of two points and if a third set is necessary it will go to 15 points.

There is a technical timeout after the teams have scored a combined 21 points. Teams switch sides after every seven points.

Aside from the typical serve, dig, block, spike terminology that volleyball has, beach volleyball has some specific verbiage used to describe unique components of the sport.

Kong Block – A stuff block with one hand

Jumbo (shrimp) – Named after the shape of the ball flight, when the attacker loops the ball over the defender’s head and lands it in the opposite corner of attack

Pokey – Hitting the ball with two of your knuckles

LSU will only have the one match this weekend, but will gear up for its first home tournament next week. The Tigers will host North Florida, Tulane, Georgia State, and Southern Mississippi March 22 and 23 for the Tiger Beach Challenge.