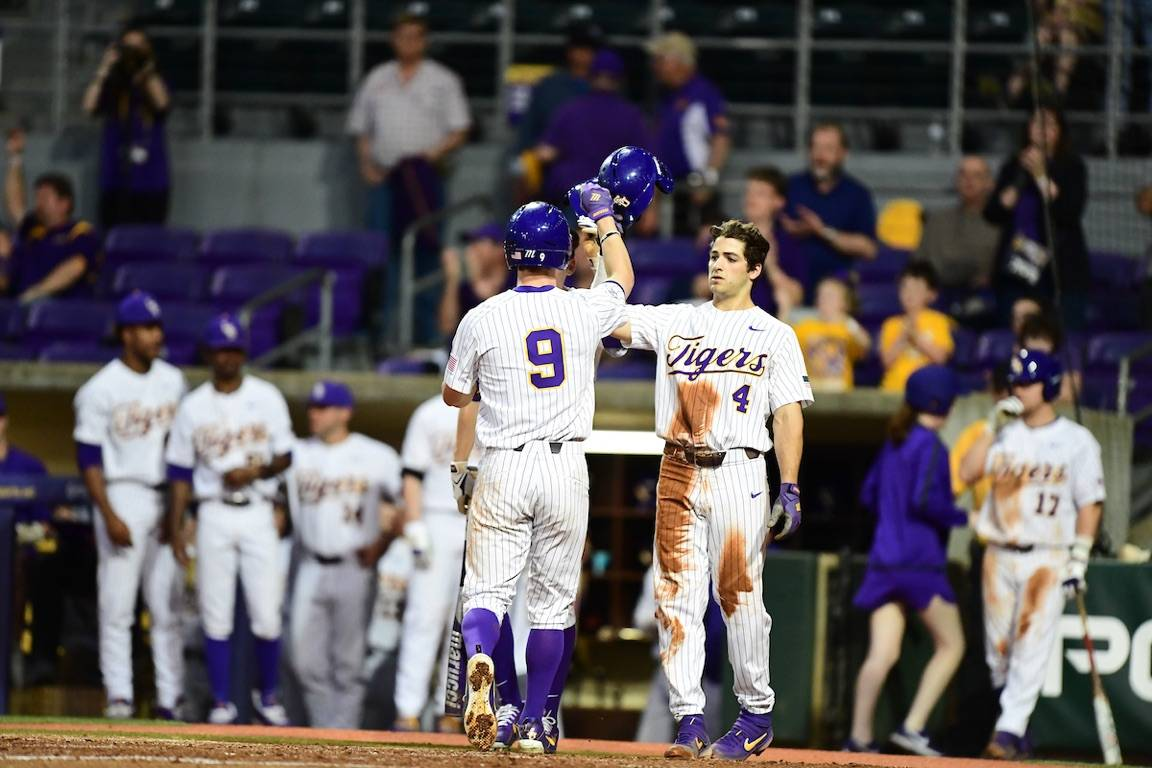 BATON ROUGE, La. – The No. 10 LSU baseball team’s bats came to life Wednesday night as the Tigers put up 18 hits on the way to a 16-5 win against Texas Southern Wednesday night in Alex Box Stadium, Skip Bertman Field.

With the win, LSU improves to 12-5 on the season while Texas Southern drops to 2-12.

LSU will open Southeastern Conference play with a three-game series against Kentucky beginning Friday at 7 p.m. CT in The Box. The game will be online only through the SEC Network+, and fans can listen to the game on the LSU Sports Radio Network.

“Our hitters came out tonight and had some great at-bats,” said LSU associate head coach Alan Dunn. “What they did tonight got us on a roll, and we were able to come away with a very good win heading into SEC play.

“We’re ready to start that 30-game, SEC grind. You’ve got to bring your A-game every weekend, and I think our guys are ready to take on this challenge. We need to play our best, beginning this weekend against Kentucky.”

Zach Watson led the LSU hitters and went 4-for-4 at the plate with three RBIs, one double, one home run and three runs scored. It was the first four-hit game of the junior’s career.

With one out in the bottom of the first inning and center fielder Zach Watson on third after sending a base hit to left field and advancing to third on a throwing error by the pitcher, right fielder Antoine Duplantis knocked his fifth home run of the season into the Diamond Deck. After third baseman Chris Reid drew a walk, left fielder Daniel Cabrera tripled to right field to drive in Reid and scored on first baseman Cade Beloso‘s sacrifice fly as LSU took the 4-0 lead to start the game.

LSU added to its lead in the bottom of the second inning when Watson hit his first home run of the season, a two-run blast that scored shortstop Josh Smith who reached earlier in the inning via walk, and LSU extended its lead to 6-0.

In the top of the third inning, Texas Southern catcher Austin Garcia hit a one-out single up the middle, and center fielder Ryan Diaz reached on a fielding error by the third baseman to put runners on first and second. First baseman Christian Sanchez ripped a two-out, two-run double to left field to cut the LSU lead to 6-2.

Texas Southern struck again in the top of the fourth inning to make it a three-run game when left fielder Tyson Thompson scored from second on second baseman Victor Cruz’s single to left field.

In the bottom of the fifth inning with one out, Cabrera sent a booming double to center field and scored on Beloso’s single past the diving first baseman. With Beloso on second after a ground out, catcher Brock Mathis hit a RBI double to left-center. Third baseman Hal Hughes followed with a single to right field to bring in Mathis and give LSU the 9-3 advantage.

Cruz drew a one-out walk in the top of the sixth inning before he stole second and scored on Diaz’s single to center field to bring Texas Southern within five runs, 9-4.

Smith opened the bottom of the sixth inning with a walk, and Watson singled through the ride side. Both runners advanced to scoring position on the throw, and Smith scored on a wild pitch. In the next at-bat, Duplantis ripped his third hit of the night, an RBI single up the middle to drive in Watson. Later in the inning with runners on the corners after Cabrera slapped a single up the middle, Beloso singled to right field, which allowed Duplantis to score easily from third. Cabrera then scored on a wild pitch to extend LSU’s lead to 13-4.

LSU tacked on three runs in the seventh inning to make it a 16-4 game. Smith and Watson led off the seventh with back-to-back doubles. Giovanni DiGiacomo entered to pinch run for Watson and moved to third on a wild pitch. With two outs and runners in scoring position after Reid walked earlier in the inning, DiGiacomo scored on a wild pitch. Freshman CJ Willis entered to pinch hit and doubled to right field to bring in Reid.

Texas Southern added a run in the ninth inning when right fielder Oj. Oloruntimilehinn tripled to center field to drive in shortstop Nic Garza who opened the inning with a walk, 16-5.