Joe Burrow: "I'm Just One of the Guys Now" 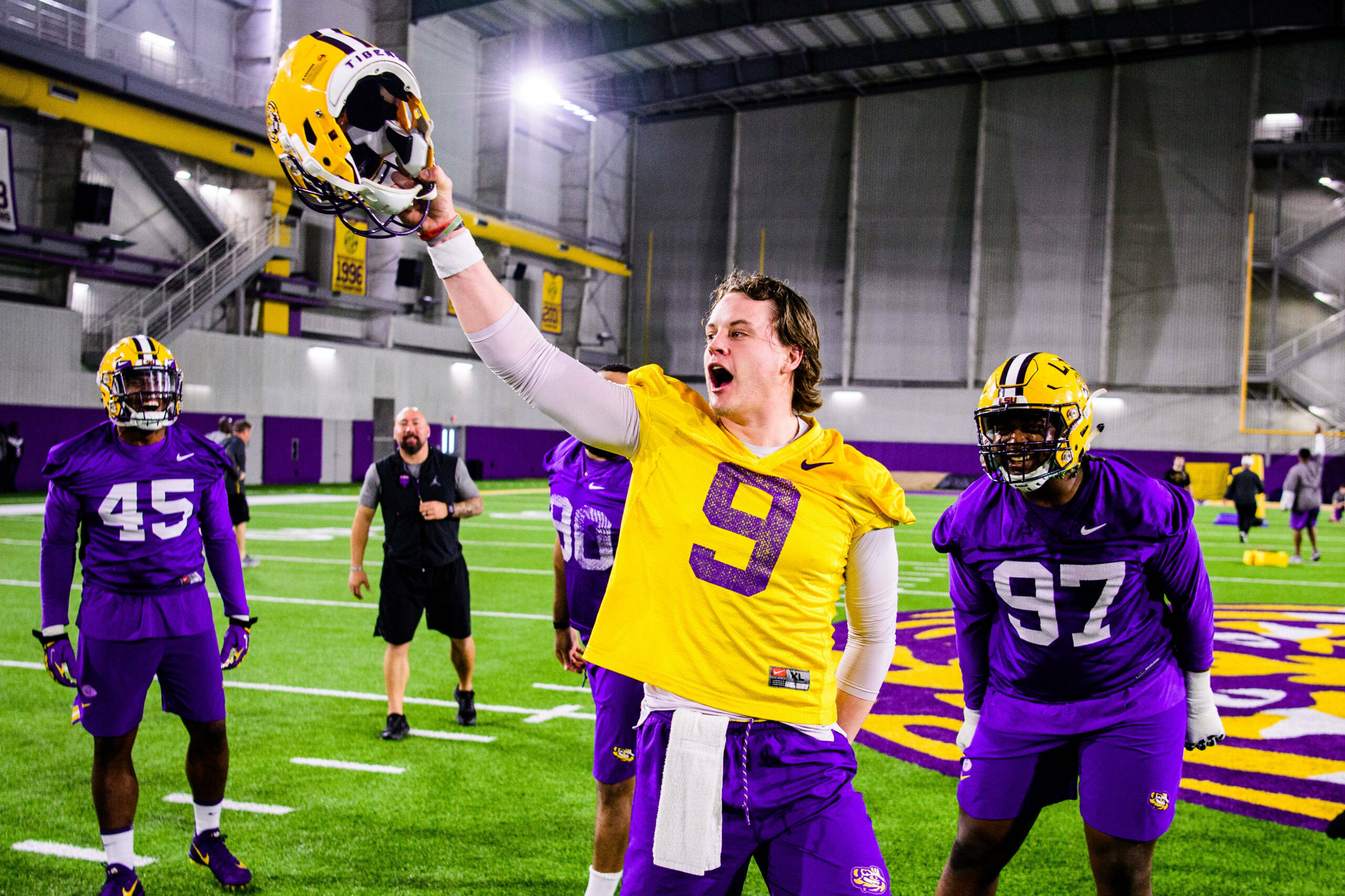 Last summer, it was all he thought about – how do I immerse myself into a fully-formed team and emerge not only as ‘one of them,’ but as one of their leaders?

After all, it’s the paramount challenge – more than defensive schemes and mastering playbooks and managing play clocks – a quarterback faces when he transfers in just months before the start of the season and takes over the reins of an offense.

But the thought that consumed him last summer is an afterthought, now – if it’s a thought at all.

There’s no simpler way to explain Burrow’s place in the team, heading into his senior season. After spending much of his junior season adapting and learning on the fly, he’s settled, comfortable, and, perhaps most noticeably, louder.

“I’m definitely being more vocal than when I first got here,” Burrow says.

He’s also spending time learning an offense that will have a different look from the one he led a year ago. The hiring of Joe Brady as passing game coordinator and wide receivers coach has already produced tangible results.

“He’s brought a bunch of fresh, new, innovative ideas to our offense,” Burrow says. “You can see a difference in practice. We’re going a little faster. We’re matching up with our defense a lot better.”

One of those new ideas is the run-pass option (RPO), the buzzword of the moment in college football circles. LSU had some RPO looks at its disposal a year ago, but Brady is a specialist in the concept. Burrow, meanwhile, is a mobile threat who gained 571 yards and scored 7 touchdowns on the ground last season, a 5.5 yard per carry clip subtracting sack yardage.

This, despite a limited arsenal of designed runs when Myles Brennan’s injury left LSU with Burrow as its only scholarship quarterback.

“It’s going to be a big part of our offense,” Burrow says. “The direction new age football is going, that has to be a part of everyone’s offense if you want to be explosive.

“Spring is a time for creative innovation, and we’re in that process right now of seeing who we’re going to be.”

Another benefit for Burrow is his returning receiving corps. LSU brings back all nine wide receivers who caught a pass last season, including junior-to-be Justin Jefferson, who had the most productive season at the position for the Tigers since Jarvis Landry and Odell Beckham in 2013.

“They were all freshmen and sophomores last year, and when you have that much inexperience, there’s going to be some growing pains,” Burrow says of his receivers. “This is one of the best groups of receivers I’ve ever been around. Those young guys are making big strides these first few days, and I’m looking forward to seeing where they’re going to go.

Head coach Ed Orgeron has also said he expects to give Burrow more control of the offense at the line of scrimmage. As a junior, Burrow grew into that role, checking into and out of plays more and more as the season went on.

The result: the Tigers had three of their best offensive performances in their final three games, averaging 51.3 points per game during that stretch. Burrow, too, was at his best, completing 66-of-100 passes for 971 yards, 9 touchdowns, and one interception, a rating of 175.26.

“Toward the end of the year, they trusted me enough to give (more control of the offense) to me,” Burrow says. “I think the last few games as an offense, we played as well as we could.

“That’s not going to be good enough next year.”

Burrow is raising the standard for himself and his teammates this spring. He’s learning new features of a familiar offense. He’s embracing a different style of leadership. A year ago, he focused on working hard and earning his teammates’ respect.

That goal was accomplished long ago. Now, it’s on to the next challenge.

“It doesn’t really feel any different. It feels like I’ve just been here a year and I’m more familiar with everybody. It feels like I’m just one of the guys now. I think that will play a big part of the leadership as far as the whole team goes.

“I don’t even think about it anymore. I’m just here now.”