Roller Coaster Season Finds Tigers on Top of the World 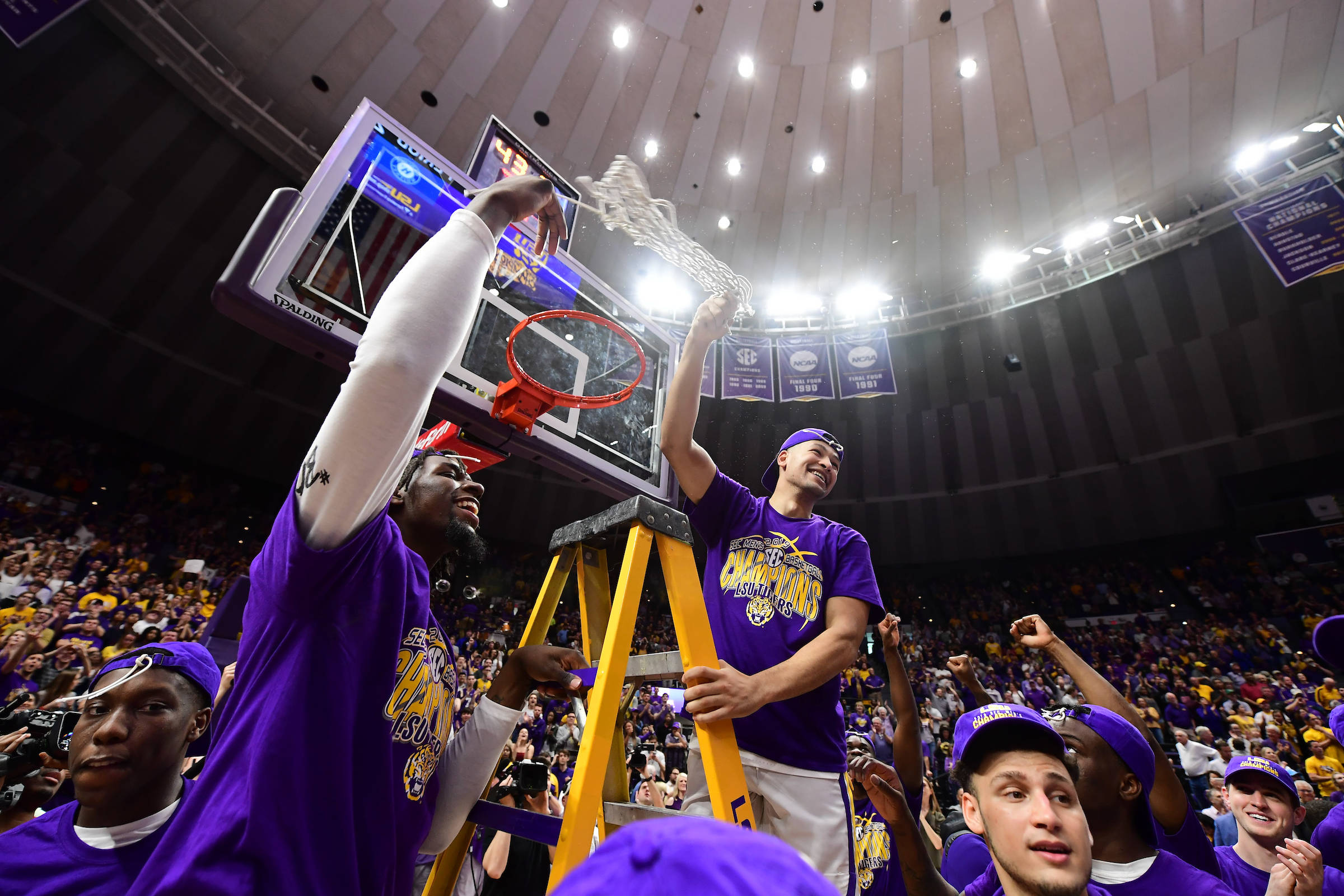 The ladder was no more than eight feel tall, give or take a few inches.

To Skylar Mays, Marshall Graves, and everyone else who climbed it Saturday night, it felt a lot higher than that.

A roller coaster 72 hours after a roller coaster season reached new heights on Saturday, as LSU knocked off Vanderbilt 80-59 to claim its 11th SEC title. The championship had been wrapped up officially with Auburn’s win over Tennessee earlier in the day, but an LSU victory meant the Tigers will share this title with no one.

The post-win celebratory aftermath was all about sharing, however. This was a collective effort, from Graves – a former walk-on playing under the scholarship of his late teammate, Wayde Sims – scoring 12 points on four three-pointers, to senior Kavell Bigby-Williams, who tallied yet another double-double (10 points, 11 boards) in his PMAC finale.

From Mays, who scored 13 points and serves as the steadying presence of a young team, to Tremont Waters, Saturday’s de facto coach on the floor in the absence of head coach Will Wade.

The sophomore point guard, who finished with 14 points, 8 assists, and 4 steals, might’ve given the biggest assist of the night to his interim coach, Tony Benford, who gave Waters a simple message.

“He mostly gave responsibility to Tremont and told him to run the team,” said freshman Darius Days, who scored 15 points of 5-of-6 shooting from 3.

“We’ve got players that have ability – Skylar Mays, Tremont,” said Benford. “Sometimes, as a coach, you can get in their way. I just said, ‘Look guys, I need you to help me and help us coaches. Just go make plays.’”

Waters listened, and so did his teammates. Despite the absences of Javonte Smart (withheld) and Naz Reid (injury), the Tigers – featuring just six players who began the season under scholarship – got six players in double figures. Marlon Taylor scored 10 – including another highlight-reel alley-oop from Waters – and Emmitt Williams added 6 points and 8 rebounds starting in Reid’s place.

Graves was the most unexpected of the stars, though. He nearly doubled his previous career-high of seven points, burying three of his triples before half, as LSU raced out to a 43-28 lead.

“He wasn’t bashful,” Benford joked. “He was shooting from Steph Curry land tonight.”

That’s not an uncommon sight for LSU’s players. Graves usually suits up on the scout team as the other team’s best player.

“He lights us up,” Benford laughed.

On Saturday, he lit Vanderbilt up. Graves led the charge from deep, as LSU hit 12-of-24 from 3, their best deep effort since hitting 15-of-30 at Arkansas on Feb. 3.

“Every time people ask about Marshall, I tell them he is the best shooter on the team,” Mays said. “I stand by that. You cannot write a better story. Marshall is an unbelievable worker and an unbelievable person. When things go right for him, we expect it. I am just so happy for him.”

“It felt amazing, just as you would expect,” Graves said. “It is just a special blessing to play with this team. It is easy to have confidence and play well when you have great teammates behind you and great coaches that believe in you. I definitely have a lot of people that I play for and we all have a lot of people that we play for. Wayde. I play for God, first and foremost. Just all glory to him and it was a great day.”

The team effort didn’t stop with former walk-ons. They included a current one, too: former baseball player Will Reese gave the team a pair of valuable minutes.

Meanwhile, Benford made sure to point out that while he may hold the title of interim coach, he needs assistants Greg Heiar and Bill Armstrong right at his side.

“They named me interim, but I call them co-coaches,” Benford said. “We’ve got a great staff. Greg Heiar used to be a head coach. Bill Armstrong, those guys are great coaches. They’ve been around a long time.

“What I try to do is focus on the players, and make sure they know the game plan. I thought the coaches like Greg Heiar and Bill Armstrong did a great job of helping me prepare the guys for tonight for us to come out and win the championship.”

Months after his death, Sims’ presence was once again felt all night. In addition to Graves’ three-pointers and Skylar Mays‘ pre-game shoes – customized kicks featuring Sims’ portrait, jersey, and other remembrances of Mays and Graves’ former high school teammate – Sims’ parents, Wayne and Fay, joined the team by cutting down the nets afterward.

“They have been a huge part of what we’ve been able to do this year,” Mays said of the Sims family, “so it’s only right they were able to cut the nets down with us.”

In honor of Wayde Sims, Faye and Wayne Sims climbed the ladder to cut down the net!#Forever44  pic.twitter.com/prNwJZMTEs

Mays couldn’t wear the shoes during the game, but he wore them during warm ups and showcased them for the cameras.

“He’s always been a huge part of my life,” Mays said. “We’ve always been at the hip. I always try to honor him any way I can, and shoes are a way I express myself. It’s a way I can express how much I care about him, how big a part he was of my life. I can’t wait to wear them actually in a game, whether it be here or at the next level.”

A day after visiting his friend’s grave site, Mays brought Sims up with him to the top of the world.

There, they cut a net, and enjoyed the view.