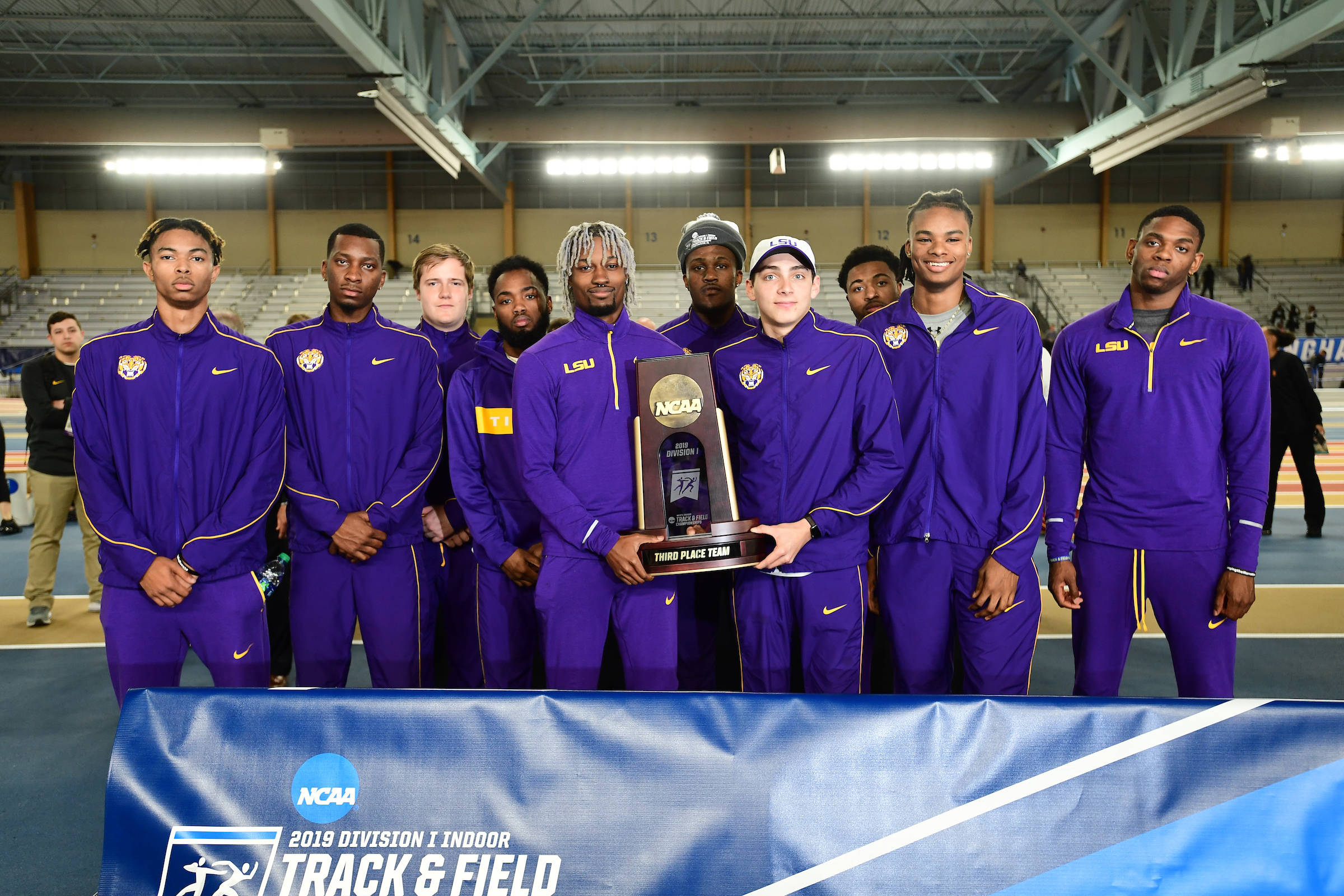 Birmingham, Ala. – The LSU men’s track and field team registered its best finish at the NCAA Indoor Championships since 2006 with a third-place showing at the national meet at the Birmingham CrossPlex. The Tigers tallied 31 points on the way to the third-place finish.

“I felt like our men battled,” head coach Dennis Shaver said. “It gives me a lot of confidence (going into outdoors). Great effort from our squad. It’s one of those things, you want to be able to get a trophy indoors, because we always know at LSU that we are going to be a better team outdoors. This gave us a lot of momentum heading into outdoors.”

Saturday’s points came from JuVaughn Harrison (7 points) in the high jump and Jaron Flournoy (4 points) in the 200 meter dash. Pair that with national titles from Rayvon Grey (long jump) and Mondo Duplantis (pole vault) from Friday and that’s how the Tigers got to 31 total points.

It was an old-fashioned three-way SEC showdown for the national title in the high jump. The final three jumpers, Harrison of LSU, Shelby McEwen (Alabama) and Darryl Sullivan (Tennessee), duked it out and it was McEwen who prevailed as the victor. Harrison, McEwen and Sullivan were the only three athletes to clear 7′ 5” in the contest. All three gave it go at 7′ 6”, but it was only McEwen who cleared that height on his third and final attempt. Harrison shared a second-place finish with Sullivan for seven points. Harrison cleared heights 6′ 10.75”, 7′ ½”, 7′ 2.50”, 7′ 3.75” and 7′ 5” in the event. It is Harrison’s first time scoring at a NCAA meet in his career and he is a First Team All-American.

Flournoy clocked a time of 20.82 in the second of a two-heat final to garner a fifth-place finish. It’s the eighth-career All-America honor for Flournoy.

The women’s squad finished in a five-way tie for 15th place with 12 total points. Kortnei Johnson, Sha’Carri Richardson and Abby O’Donoghue were the three scorers for the women’s squad. Johnson scored in two events for the LSU with performances in the 60 and 200 meter dashes. Johnson clocked a time of 7.21 in the finals of the 60 meters to place fifth (four points), and she turned around and ran the 200 meters less than 45 minutes later and finished sixth in the 200 final with a time of 23.20 for three points. Johnson is now a 10-time first team All-American.

Richardson and O’Donoghue both scored in their first ever NCAA indoor meets. O’Donoghue cleared 5′ 11.25” in the high jump to take sixth (three points), and Richardson, the only freshman to make the finals of the 60 meters, took seventh with a readout of 7.23 seconds for two points. O’Donoghue attempted to clear what would have been a personal best of 6′ ½”, but she missed that bar three times.

Florida won the men’s team title with 55 points and the Arkansas women won with 62 points.

LSU will open up the outdoor season with a trip to Lafayette, La., for the Louisiana Classics next Friday and Saturday (March 15-16).