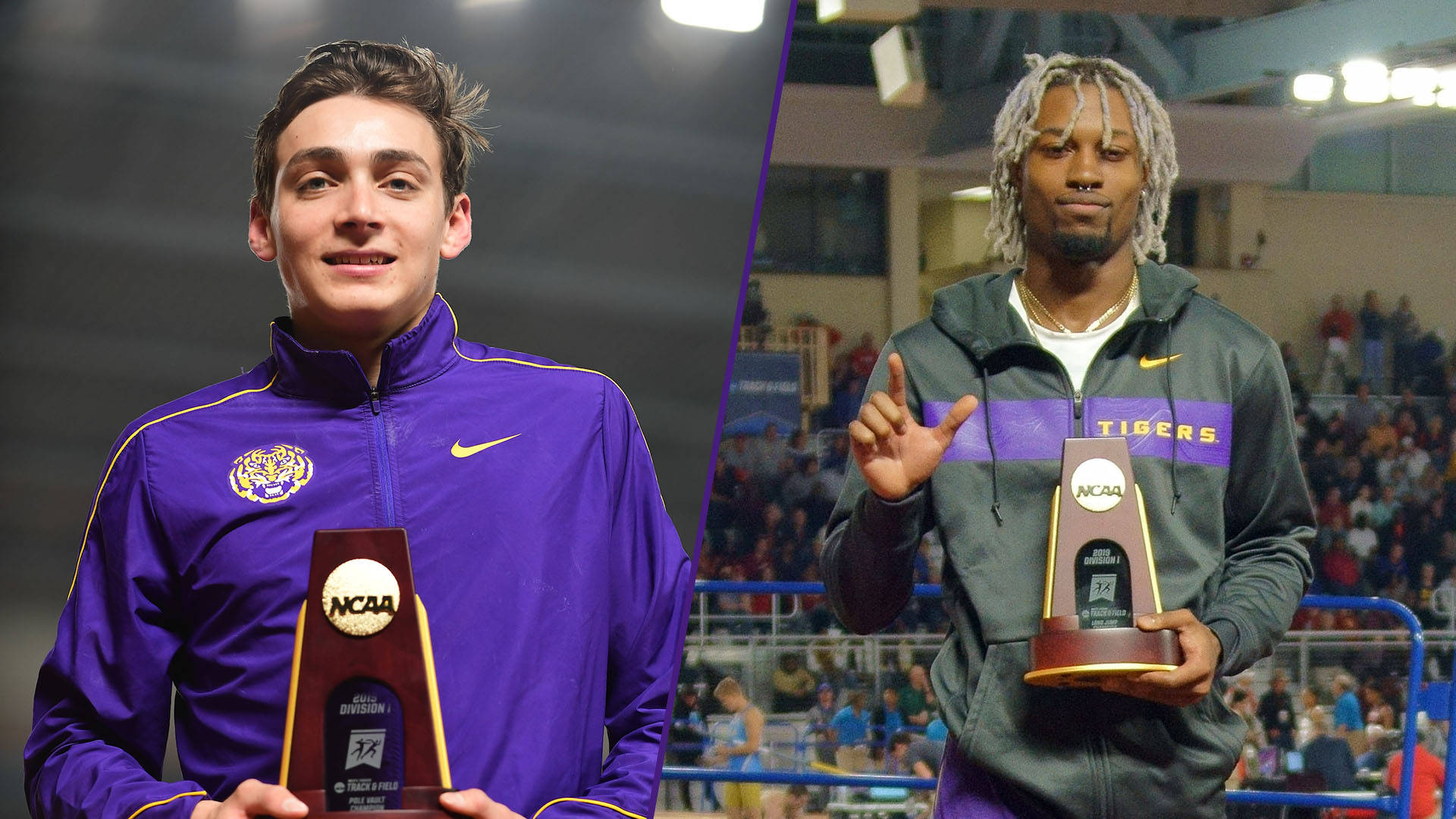 Birmingham, Ala. – After day one of the NCAA Indoor Championships, the LSU men’s track and field squad sits atop the team leaderboard with 20 points thanks to event titles from Rayvon Grey (long jump) and Mondo Duplantis (pole vault). With the win in those two events, LSU became the first program in NCAA history to win both the long jump and pole vault at the NCAA Indoor Championships.

“I thought today went well for us,” head coach Dennis Shaver said. “Really proud of Rayvon and Mondo. They came out and did what they had to do to score points for our team, and in a big way. I like where we are at and we’ll come back tomorrow looking to put more points up.”

LSU leads the men’s team competition with 20 points and they are trailed by Wisconsin (12 points), BYU (11 points) and North Dakota State (10 points). The Tigers will have Jake Norris (weight throw), JuVaughn Harrison (high jump), Jaron Flournoy (200m dash) and the 4×400 meter relay for scoring opportunities on Saturday. Houston and Florida qualified five athletes apiece from Friday nights semifinals, and they both have a couple of field athletes slated to compete Saturday as well. The LSU women’s team has yet to score yet, but they have scoring chances from Kortnei Johnson (60/200m dash), Sha’Carri Richardson (60m dash), Abby O’Donoghue (high jump) and the 4×400 meter relay on day two. New Mexico currently leads the women’s team race with 17 points.

Grey, who was competing in his first ever NCAA indoor meet, showed no nerves and opened up the long jump with a quality mark of 25′ 8” (7.82 meters). That mark would carry him through the first three rounds and earn him three more jumps in the finals. Entering the finals, Grey was in sixth place, that was, until his fifth jump came about. Grey soared out to a distance of 26′ 1.75” (7.97 meters) to claim the lead with one round to go. No one came close to Grey’s mark in the final round and he became LSU’s first indoor national long jump champion since John Moffitt won the title in 2004.

“Coming into this meet, I didn’t really care how far I went, I just wanted to get the win,” Grey said after the fact. “It means a lot to me to contribute 10 points to the team. I came here to have fun and that’s what I did. The key to succeeding in a meet like this is staying focused. There’s a lot of really good athletes at this meet, and for me to come out on top of my event is special.”

Grey’s mark was just enough to claim the title as Trumaine Jefferson of Houston took silver with a jump of 26′ 1.50” and Florida’s Grant Holloway took third with a mark of 26′ 1”. Grey and Moffitt are the only two men in LSU history to win indoor long jump national titles.

Duplantis won the pole vault with a clearance of 19′ 1.50” to score 10 points for LSU. It’s LSU second-ever indoor pole vault national title as he joined the likes of the former school record holder, Russ Buller, who achieved the feat in 2000.

“Seeing Rayvon get the win in the long jump, that hyped me up, it motivated me,” Duplantis said. “I’m glad we could get the team off to a good start today and put up some big points. We did what we had to do.”

Duplantis attempted to up his collegiate record to 19′ 5.75” for the cherry on top, but he missed three attempts at that height. Duplantis’ clearance of 19′ 1.50″ was a Birmingham CrossPlex facility record.

The second and final day of the NCAA Indoor Championships will get going for LSU at 1 p.m. CT with the high jump. A full list of competitors can be found below. The meet will be streamed live on WatchESPN on Saturday.

All these athletes that finished 9th through 16th are Second Team All-Americans.