Smith Walks Off as No. 9 Baseball Takes Game 1 vs. Cal 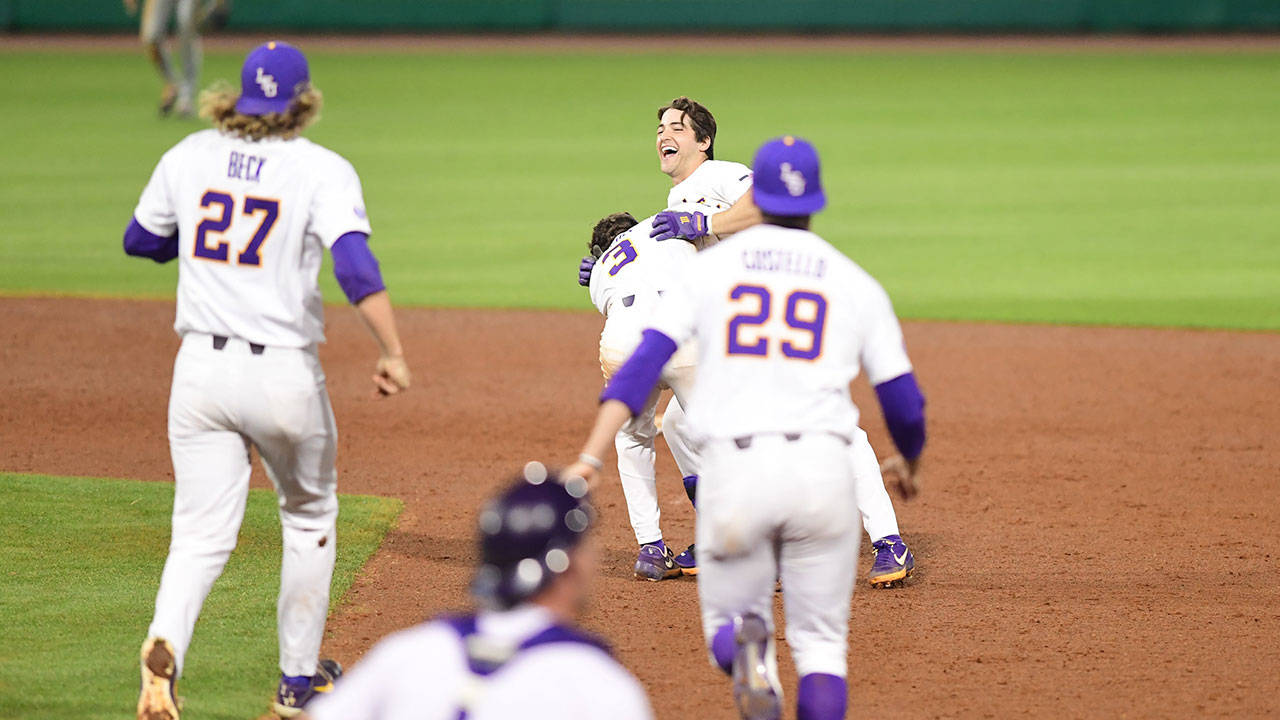 BATON ROUGE – With the bases loaded and two outs in the bottom of the ninth, shortstop Josh Smith extended his hit streak to 13 games with a two-RBI single and lifted the No. 9 LSU baseball team to the 4-3 win against Cal Friday night in Alex Box Stadium, Skip Bertman Field.

To set up the walk-off, pinch hitter Saul Garza singled through the right side with one out, and Drew Bianco entered to pinch run. There were two outs when designated hitter Giovanni DiGiacomo singled to third base to put runners in scoring position. The Tigers loaded the bases with two outs when Hal Hughes struck out swinging but made it safely to first on a wild pitch.

The series will conclude Saturday with a doubleheader beginning at 1 p.m. CT. There will be two-seven inning games, and the second game will begin approximately 45 minutes after the conclusion of the first. Both games can be watched online on the SEC Network+, which is accessible at WatchESPN.com and through the Watch ESPN app. Fans can listen to the first game on the LSU Sports Radio Network, including 98.1 FM in Baton Rouge. The second game can be heard locally in Baton Rouge on 100.7 FM. Free audio can be found at LSUsports.net/live.

“It wasn’t a thing of beauty, but we will certainly take this victory,” said LSU coach Paul Mainieri. “Cal’s lefty starter threw a sinker that was eating up our hitters through the first five innings. When we were on defense, it felt like every inning was a battle; we had to throw a lot of pitches and struggled with strikes again. We made it harder on ourselves than we should have, but we hung in there. We just need to keep getting better and play on a more consistent level.

“I told Josh Smith right at the end, ‘Josh you’re not having a great night, but this is the wonderful thing about baseball; you always get another chance and you’ve got to be ready for it.’ It’s a great lesson about life; you can’t get down on yourself and always be ready for that opportunity.”

Cal starter Arman Sabouri worked five innings and allowed one run on one hit, walked one and struck out three, and freshman Sam Stoutenborough (2-2) suffered the loss and tossed the final four, allowing three runs on seven hits, walking one and striking out two.

Cal took the 1-0 lead in the top of the first inning when left fielder Cameron Eden led off the game with a solo home run to left-center.

Catcher Brock Mathis smoked a triple to left-center to start the bottom of the third inning. It was the first triple by a Tiger this season. He scored in the next at-bat when DiGiacomo drilled a sac fly to left field, tying the game 1-1.

In the top of the sixth with the bases loaded after Sam Wezniak singled up the middle, the Bears drew three consecutive walks to drive in the shortstop, and a passed ball allowed center fielder Brandon McIlwain to touch home, giving Cal the 3-1 lead.

With first baseman Cade Beloso at first after a one-out single to right field, third baseman Chris Reid doubled down the left field line to put runners in scoring position. Mathis flied out to center field, and Beloso tagged up to put the Tigers within one, 3-2.

Aaron George, Landon Marceaux and Devin Fontenot shut out the Bears as they entered from the bullpen for 1.2 innings of work. They allowed two hits and walked four.